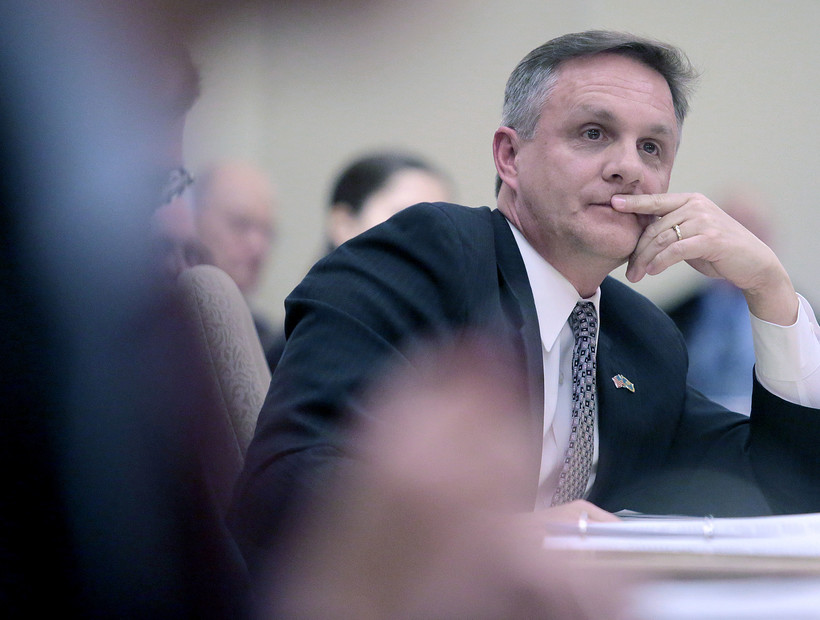 A Conservative Reflects On 25 Years In State Government

Mike Huebsch, a leader of conservative politics in Wisconsin — who went from Republican lawmaker to political appointee — retired from state government this week after 25 years.

Huebsch of West Salem may not have been a household name since he never held statewide office, but he’s helped shape utility policy in the last five years and was a key player in Act 10, the state law that stripped collective bargaining rights from most public employees and led to massive protests at the state Capitol in 2010.

Huebsch retires after five years as a Wisconsin Public Service Commissioner appointed by former Gov. Scott Walker. He was also the first administration secretary for Walker, an Assembly speaker and a former state lawmaker from the La Crosse area, first elected in 1994.

Huebsch leaves the PSC one year before his appointment is up and at a time when the agency is being sued by environmental groups over the three-member commission’s approval of the Cardinal-Hickory Creek energy transmission line in southwestern Wisconsin.

He and Commissioner Rebecca Cameron Valcq, appointed by Democratic Gov. Tony Evers, are being accused of having a conflict of interest in the case and not recusing themselves from the decision.

Huebsch said the lawsuit has nothing to do with his decision to retire. He figures Evers wouldn’t reappoint him after his first term was up in a year, because they are from different political parties.

"It’s interesting how individuals who don’t like the decisions you’ve made are convinced you are somehow either corrupt or you’re on the take. Sometimes it just comes down to, 'You know what, we just disagree and that’s just the way it is,'" he said.

"Because it is a lawsuit, I better not speak much about it, but it’s one of those things where those who disagree with your opinion are certainly going to find reasons and ways to try and stop it," Huebsch said.

As a lawmaker, Huebsch was an advocate of Wisconsin needing more nuclear power to reduce greenhouse gas emissions. He leaves the PSC still thinking nuclear power is a good solution going forward for Wisconsin, but he's also aware of the opposition to nuclear power.

He does expect more wind and solar projects to be approved in the state but said there are some realities with more renewable energy powering Wisconsin.

"If you want more renewables, Wisconsin is not a great wind state. We’re not going to be able to put up a lot of windmills and power our state. They can do it in Iowa and Nebraska, but that means transmission lines like the one I‘m being sued on going through the southwestern part of the state," he said.

"If you want renewables, you have to like transmission. You have no choice," he added. "That‘s the challenge of every source of energy that we’ve got out there. We've got to have that balance. We‘ve got to figure out how we’re going to move toward renewables, but it has to be safe, reliable and affordable. If you also now wanted green or carbon-free, you can’t give up any of these other three (safety, reliability and affordability.) So that‘s the challenge."

Huebsch said he was originally going to be Walker’s first budget director and spent about two months developing Walker’s first state budget proposal, but by the time the governor was sworn into office, he became administration secretary instead.

The state of Wisconsin was facing more than a $3 billion budget deficit. Huebsch said Act 10 was the result of the fiscal reality combined with a series of reforms conservative politicians had wanted to enact for years in Wisconsin.

"This had been building for some time. It was difficult for us to defend anymore the idea that state employees weren’t going to pay anything for their health care, since health care was such a huge issue at the time and it was so expensive. Not many (private sector) companies were providing pensions anymore. The state still does provide pensions. Not only were employees not contributing anything to their health care, they weren’t contributing anything to their retirement either. Those were two very difficult things to defend. We (conservatives) had tried to chip away at those things," Huebsch said.

Huebsch said he expects Act 10 to have a multi-generational impact on government in the state of Wisconsin.

"It’s provided the elected officials, the school board member, the city councilperson, the state assemblyman or state assemblywoman the tools to be able to have greater control over what they’re going to do in their budgets and the opportunity to deal with their employees as an employer," he said.

In his 16 years in the state Legislature, Huebsch served as Assembly speaker from 2007-2009 at a time of divided government where Republicans controlled the Assembly, Democrats controlled the Senate and Democrat Jim Doyle was governor. Huebsch was also a member of the Joint Finance Committee before becoming Assembly Speaker.

He’s said he wants to use his experience to become a government consultant.