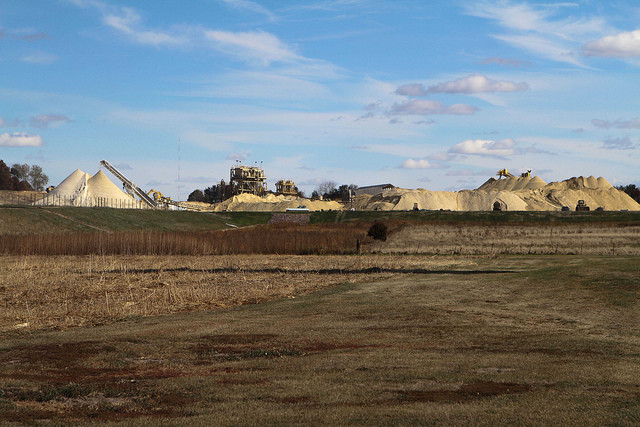 A bill that would have limited local control over frac sand mines was not passed by the Legislature. Photo: Carol Mitchell (CC-BY-NC-ND).

New Scorecard Says Several Bills Introduced Would Have Harmed Environment, But Were Never Given A Final Vote
By Chuck Quirmbach
Share:

The Wisconsin League of Conservation Voters has released a scorecard that says the environment has fared all right under the state Legislature over the last two years, partly because some bills were taken off the table.

The league said there were several measures proposed that would have harmed the environment, but they never made it onto the floor for a final vote. The league's program director Anne Sayers said those bills involved groundwater withdrawal and weakening local control over frac sand mining.

“We see conservation voters immediately jumping on the ability to email legislators, voicing their opposition, or writing letters to the editor – sometimes even coming to Madison to testify at a hearing or meet one-on-one with their legislator in their office,” said Sayers.

Sayers said some people became energized after what she calls a losing battle: the passage of the mining bill that may help a proposed iron ore mine in northern Wisconsin.

“This is a huge blow to conservation voters statewide,” said Sayers. “We found that overwhelmingly, voters opposed this bill. And we felt like our concerns weren't heard.”

Sponsors of the mining bill say it could help create jobs in mining and at mining equipment manufacturers.

The league says a couple of Republican state lawmakers joined some Democrats in making an effort to help the environment, while three Republican senators made the group's “dishonor” roll.