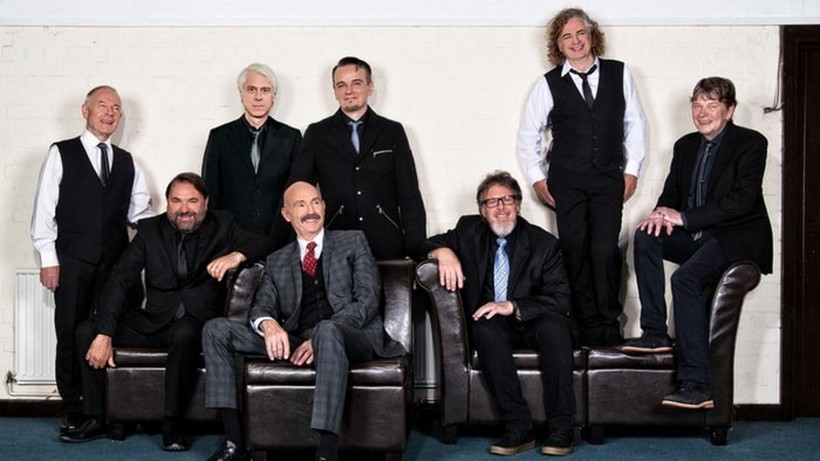 MILWAUKEE -- Progressive rock has an earned reputation for artistic brazenness and theatricality, but there was nothing exaggerated about how King Crimson chooses to begin their performances these days: a lecture.

It's a strange way to start a rock 'n' roll show. A disembodied voice speaking over the PA made an announcement that began even before the house lights dimmed. It was a carefully-worded warning not to take photos or video, along with a general outline of the performance's structure. It wasn't particularly long in terms of time spent but its content -- bland and lost in specificity -- dragged and soured the opening moments. (Did they think everyone missed the giant signs saying the same hoisted on two stands on the stage?)

And with business completed, the voice sought to reframe things a little and recapture what was lost.

"Let's have a party," said the voice, disingenuously, in a clipped English accent. (It was undoubtedly the voice of King Crimson guitarist and mastermind Robert Fripp.)

But this concert on Sunday night at the Riverside Theater in Milwaukee wasn't a party. It was a recital, with all the precision and formality there in. Dressed in their Sunday best, the band sought to showcase what master musicians can achieve after years of practice. They might name drop classical-music firebrands like Bela Bartok or jazz trailblazers like Ornette Coleman as key influences and this isn't for nerdy show. This is clearly the lens through which Fripp and company see themselves. This group was born in British rock clubs and outdoor festivals of the 1960s, but that was mere a prologue to a kind of white-gloved respectability that they expect today.

That's not to say a King Crimson recital is a tedious experience. Thrilling is a better word, as much as it suits long-form rock music so thoroughly controlled and orchestrated. No hippie-dippy light show, no Peter Gabriel in costume and no distractions allowed to the musician absorbed in performance. One might even label it all as pedagogical. And that is the way that Fripp and his cohorts appear to like it.

This level of commitment might be the secret for how King Crimson has lasted quite so long. It's entirely unexpected that the band is effectively the last act standing among that founding generation of progressive rock groups of the '60s and '70s. While their contemporaries like Yes, Emerson, Lake and Palmer, Jethro Tull, Genesis and Pink Floyd enjoyed greater commercial heights, only King Crimson is a fully-functioning outfit today, touring and releasing new music, moving ever forward. Fripp, who remains the band's sole original member, has kept the whole operation going, shepherding it through innumerable lineup changes and stylistic orientations and focused on a musical North Star of constant evolution. He runs it like a jazz group, with the fluctuating membership allowing for new sounds and approaches to enter their sonic arsenal.

The band -- now boasting eight members -- includes three drummers, all arranged in the foreground of the stage. Fripp, perched on a stool and with headphones on, was tucked in the corner and seemingly doing little, as only a puppet master can. His creation is now a highly rhythmic symphony prone to guttural roars, flights of whimsy and extended avant-garde diversions. The music can be both sweeping in scope and full of delicate accents. Practice is the only way to pull off material this complex. Three chords and the truth this is not.

Since Crimson was reactivated again in the '90s, the music has mostly emphasized the virtuoso nature of its star players. Although this latest incarnation still prizes instrumentalism and improvisation, the current band has turned to embrace the lyrical and highly melodic material in the group's back catalog. The inclusion of singer-guitarist Jakko Jakszyk, whose voice is eerily similar to original frontman Greg Lake's, makes this the most accessible formation in years.

This lineup is a complicated and flexible unit and little is beyond its grasp. Master bassist Tony Levin, who has been with the band since the early '80s, continues to be the glue holding this array of colliding sounds together. While he primarily stuck with a four-string bass, he occasionally brought out an unusual, body-less instrument that looked like a giant, jungle centipede that he tapped at with both his fingers. Meanwhile, the band's newest recruit, veteran sideman Jeremy Stacey, offered both additional drumming and stellar keyboard work when the moment arose. Stacey, who formerly backed Noel Gallagher and Sheryl Crow, looks like John Bonham with his big beard and black bowler hat, but his attack behind the drum kit swung with more finesse and split the difference between Gavin Harrison's straightforward beat-keeping role and Pat Mastelotto's penchant for exotic percussive embellishments.

Despite overlapping briefs, each musician knew his part. The concert was a moody, shifting journey, like watching a film soundtrack being recorded live. The opening instrumentals were a pastiche of scenes that bled into one another and pulled the audience deeper into King Crimson's world. "Pictures Of A City" was like the anthem of a swaggering protagonist prowling the darkened streets from a film-noir flick. When saxophonist Mel Collins stepped forward for a smoldering solo, it was the score for this imaginary film's hot-and-heavy love scene. By contrast, "Cirkus" commenced with Jakszyk earnestly singing with only a flourishing piano as accompaniment, as if he was cast in a Broadway musical. When the band joined in, the music morphed through several heady tangents before settling into a Mellotron-drenched mode that could have been tacked onto a Disney animation dreamscape.

As was clear throughout, this unit didn't lack in ambition or dexterity. The group members impressed when they took the circular, angular rock of "Breathless," which shares many of the musical touchpoints for the band's mid-'70s instrumental classic "Red," and brought a whiff of aggression to what sounded on vinyl like a purely mathematical exercise. The band tackled both parts of King Crimson's "Larks' Tongues In Aspic," remolding into an intricate suite that impressively climaxed with a rolling wall of drumming and trilling guitars that recalled the grandeur of '70s-era Queen. Later, the menace, guitar snarl and frenetic energy of "Level Five" projected a sense of doom such that the crowd could have momentarily mistaken King Crimson for a white-collar version of Black Sabbath.

While often impressive during these musical excursions into the back catalog, it was the performances of the group's best-known songs that this troupe shone brightest and seemed to connect emotionally with the audience. These hits, if King Crimson ever truly had any, were sprinkled throughout the two sets. Jakszyk's sincere emoting on "Epitaph" (and joined by Collins' soprano sax solo) made this performance an early highlight and earned the group its first standing ovation of the night. "Fallen Angel" featured the trio of drummers trading rolls (and percussionist roles) before Collins launched into a baritone sax solo. The Mellotron splendor of "In The Court Of The Crimson King" was many fans' first introduction to Fripp's mythology and the musicians relished the musical power in their hands and treated the material with special care. The cascading drum downbeats cracked like fireworks and meshing of undulating keyboards and vocal arias made this an invocation to ancient gods nearly forgotten.

The extended ballad "Starless" featured Collins' soprano tracing the core melody and standout guitarwork from Fripp as he showed his uncommon vibrato technique -- making the notes ring by shaking his wrist like a cellist -- which is the secret behind his signature sustain that made such an impression on contemporaries like David Bowie and Brian Eno. (Fripp demonstrated it again as the band stretched "Easy Money" into jam-band territory.)

When called back for the encore, the group responded with their trump card: "21st Century Schizoid Man." Few in this adoring crowd looked like they first heard this gem in a sample from a Kanye West jam. Fewer still headed for the exits as the band tore through the song's jazzbo passages and intricate instrumental workouts with excitement and tenacity. This wasn't a tired rehashing. The skronk-heavy song was an excuse to turn it loose and to bask in a love of musical exploration at breakneck pace. If this performance was a party, that is what we were celebrating.

Perhaps this degree of control is the secret to King Crimson's longevity. Or, maybe it's what inoculated the band as time and rosters have changed. Fripp and company thought out all the options and conceived this forum as entirely appropriate for a band nearing its 50th anniversary. Even improvisation and innovation need structure and this group's commitment to both is laudatory when the state fair circuit demands so little for a meaty paycheck.

Pedantic or not, King Crimson does have something to teach. Whether in the form of a lecture or a recital, a performance like this shows progressive rock isn't a retro subgenre. It can live and breathe rather than just be a glimpsed as a snapshot in time.