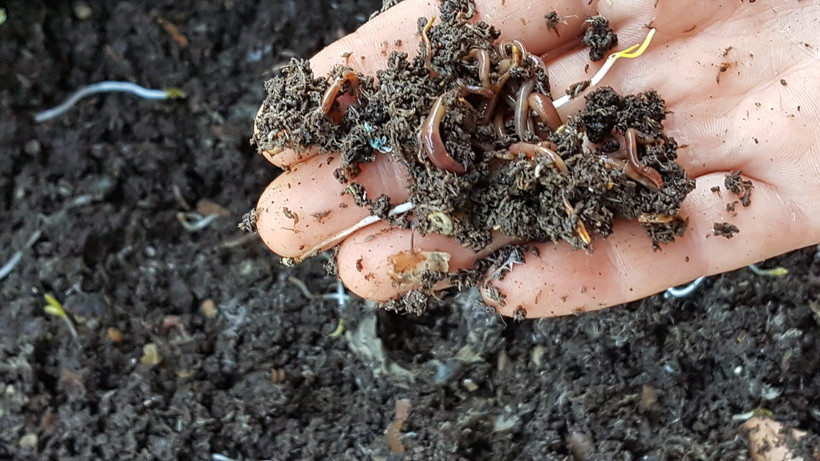 Every three days, Donna Yost frequents five businesses in the greater Green Bay area — not for their food but rather their buckets of waste.

Yost takes those buckets of coffee grounds, sandwich innards, bananas and other fruits and feeds them to her 1.5 million red wiggler worms, some of the best composters, she said.

The worms work outside at New Turning Ponte Farm in the Village of Crivitz, about 60 miles due north of Green Bay. Even when temperatures outside don't rise about 20 degrees, the composting process puts off a ton of energy, keeping it a balmy 75 degrees in their work environment.

"The worms are very much like us and what ranges they like," Yost said. "If we're cold, they're cold, and they work best when they're comfortable."

Yost's worms are helping her and her community live out the philosophy of zero waste, an idea popularized in the early 2000s by blogger Bea Johnson, who added two more Rs to the reduce, reuse, recycle mantra: refuse and rot. Yost said this kind of philosophy encourages being intentional about what you're buying, where it comes from and where it's going.

"It's a cradle-to-cradle philosophy," she said. "(It) says you're going to think about what's going to happen at the end of this particular items' lifecycle."

The resulting effort by the red wigglers comprise black dirt and worm castings, or poop. Yost sells the worm castings by the gallon for $3 through her company, Vermicopia.

"The worm castings are the most complete fertilizer that's most readily available to plants," she said, noting plants can absorb those nutrients immediately. "It's just superfood."

Yost, who started feeding the worms with restaurant goodies back in August, said the worms eat their weight each day. They're also well-adept at reproducing. A mature worm will lay two to three cocoons a day and there are two to four baby worms inside of each.

Yost gets her scraps from five businesses in the Green Bay area: Luna Coffee Roasters, both in downtown De Pere and in Bellevue, Nectar, Glas Coffeehouse, Kavarna Coffeehouse and Great Harvest Bakery.

She weighs the buckets each time, and finds the weight of scraps are pretty consistent each week. Kavarna and Luna bring in about 300 pounds each. Glas, Great Harvest and Nectar are at about 100 pounds each, she said.

For those interested in home composting, Yost offered some advice:

Yost says her philosophy is to put anything and everything compostable in your compost bin, including as many grass clippings as you want. She said having a variety of items in the composting bin leads to better nutrients overall.

"Just like we want to eat different kinds of foods for our nutritional level, the variety of things that you put into your compost help to create a greater variety of nutrition in your compost," she said.

You can add things like coffee filters and newspaper shreds, but leave out meat and dairy products.

Add worms to speed up the process.

Keep in mind that if you have worms and it gets too hot for them, they'll burrow deeper in the ground to cool down.

Yost noted that some have concerns about how these worms impact natural species in the area, but added that no worms now in Wisconsin are native. They were pushed out with the glacier 10,000 years ago. Most of the worms here came during the Colonial period when people were bringing plants and dirt from Europe. 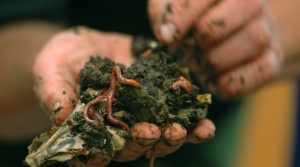 A farmer in Green Bay has a unique side hustle:  collecting food waste from restaurants to feed to her worms, who then turn it into nutrient-rich compost. We talk to her about worm poop and how we can put our food scraps to good use.