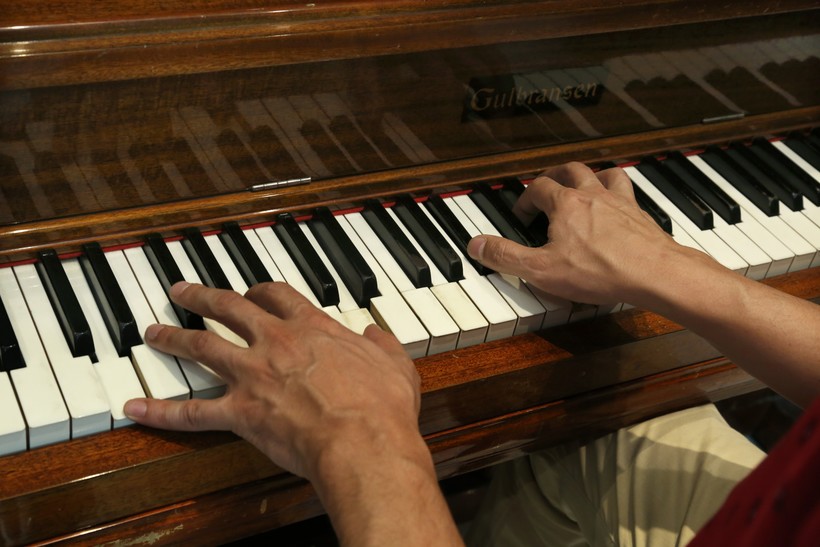 Google, Sony and other companies are striving to develop machines that can create music. The results have been promising so far.

But will artificially intelligent machines ever write something as sophisticated as an original musical? That's what composers Benjamin Till and Nathan Taylor tried to figure when they set out to create the world's first computer generated musical.

To write it, Till and Taylor collaborated with computer scientists around the globe.

Various aspects of the creative process were outsourced to algorithms. A music-writing program called Android Lloyd Webber composed basic melodies while another, Clarissa, scraped the internet to assemble lyrics. The two composers synthesized the work of their computational collaborators into the musical "Beyond the Fence," which had a two-week run in London in 2016.

The following Q&A comes from a longer conversation with Till and Taylor, edited here for clarity and length.

Anne Strainchamps: Benjamin, you and Nathan relied on an algorithm to generate melodies for the musical. The algorithm was named Android Lloyd Webber, pretty clever. Were you surprised by what you heard?

Benjamin Till: I walked in and I saw this chap playing really ferociously complicated piano music, and he told me, 'Well, this is computer music.' He played me this first thing that came out of Android Lloyd Webber, and my first words were, 'How do we make that sound good?'

And he was so offended, and I said, 'because it's very much like the sort of thing a 5-year-old would do.' And he was really offended.

Nathan Taylor: When you think about it, it's extraordinary to think that a computer could come up with something that a 5-year-old human could do, that is amazing. But we had the clock ticking and we had a musical to write.

AS: I have to say, hearing all the work involved, this sounds so much more difficult and so much more complicated than just writing a musical on your own.

BT: We spent a long time trying to humanize the computers, and I think that's the natural thing that you need to do sometimes. But I would get so frustrated. We'd sit there and this nonsense was coming out of the music software.

We'd sit in our loft with a pianist in the middle, me on the right-hand side, Nathan on the left. And we would feed him page after page of music and it would go straight into the dustbin.

BT: It really did nearly send us mad. And somebody said to me at one point, 'You have to see this computer – all these computer systems – like a 6-year-old child who's drawn a lovely picture.'

You know you want to frame it on your fridge and make it look as nice as it can, but ultimately you know that it isn't very good. And actually that did slightly change my opinion on things. You know it couldn't be perfect because the computer was kind of wrecking quite a lot of what otherwise might have been quite fun.

AS: You've written so many other musicals, and I imagine at the end of watching it perform for the first time there must be this feeling of tremendous pride and ownership knowing that all of this came out of you. Was that different, sitting in the audience and watching this musical?

NT: So I felt very much that because we'd had to bring that music so much inside ourselves, to be able to work on it and develop it, I felt every bit as proud of it in a way that it was ours, it was ours collectively. Me, Ben and the scientists. But because we'd done so much work and had to be so passionate about it, I felt that we had true ownership of it.

BT: I think this is where it comes back to the whole thing of ... computer creativity is nothing without human beings.

(It's difficult) just to interpret what computers have done. Computers can't yet define what is good art. They don't know if they've created something that's good or not. And if you ask them to create something better, they'll just give you something different. They won't yet know how to develop something, they don't know which ways to interpret good art.

NT: None of the systems we were using could improve upon what they had already done. They could just give us more melodies, more lyrics, more premises. Always something else, something different, rather than something iterative.

AS: I must say I am really reassured to hear you say that at the end of this process there is still something fundamentally, deeply mysterious about art.

NT: I think there has to be.

BT: I couldn't write interesting stories without a sense of magic, without a sense (that there's) something else out there. Because at the end of the day, yes, we can talk about the fact that not all semitones are equal on a purely scientific level.

But at the end of the day, there are certain suspensions, there are certain chord progressions that just work. We don't understand why they work but they make her cry, they touch us. And as long as that is the case, then I can very happily believe in magic.

For more about Till and Taylor's experience, check out the full interview or the documentary "Computer Says Show."