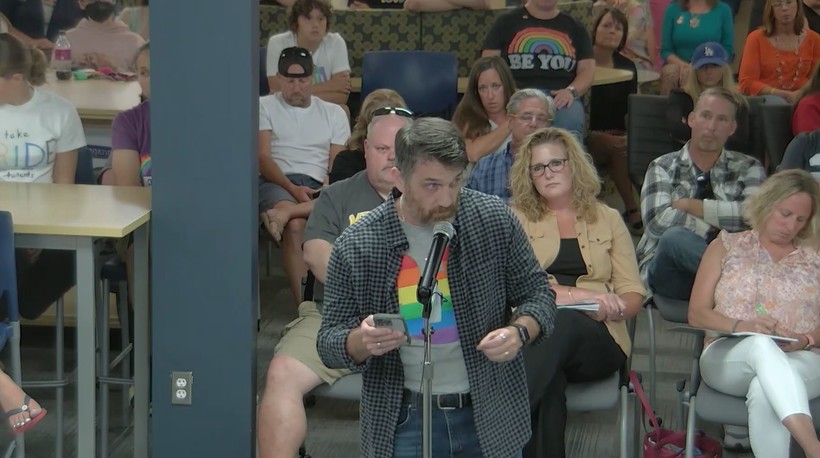 An online petition against the decision has over 13K signatures
By Evan Casey
Share:

A move by the Kettle Moraine School District to prohibit staff from displaying pride flags or using pronouns in their email signatures has been met with outrage from the community.

The decision, which was approved by the school board, has garnered national attention and an online petition criticizing the vote. As of Thursday afternoon, that petition had received over 13,000 signatures.

After a legal analysis of the employee code of conduct, the district and superintendent made the decision to ban staff from displaying any political-leaning flags or signs. The school board approved the new expectations for staff at a meeting with a unanimous vote in July. The decision also includes Black Lives Matter and "Back The Badge" messaging.

Several area residents criticized the move at a board meeting Tuesday night. Over 20 students, parents and former graduates of the district spoke at that meeting. Many said the decision was unnecessary and others said the district was moving in the wrong direction.

"Pride flags are not me taking a political stance. They are a statement saying I accept myself and others," said Edith Cramer, an incoming freshman.

Cramer said he uses he and him pronouns.

"Pronouns are not inappropriate or unprofessional. They are simply just stating what we are," he added.

Noor Salameh, a senior at Kettle Moraine High School for Arts and Performance, is the head of the school's unity club. Salameh urged the board to reconsider its prior vote.

"It is your livelihood to protect and nurture the students in this district. I ask you to do better," Salameh said. "I ask you to listen to your student body, to the people you were elected to protect."

Two students of the district, Bethany Provan and Britt Farrar, started the Change.org petition criticizing the board's decision. Those students said they're part of the LGBTQIA+ community.

"When walking into a classroom where we see a pride flag hanging up, we have a sense of comfort and acceptance," the petition says.

Both students also spoke at the board meeting. They said the decision doesn't just impact the staff, but also the students.

"Think of all the students and kids who are scared to go home because they don't have the support of their families and their own parents," Provan said. "But when they walk into school and see that simple rainbow flag hanging on the wall, they finally feel safe and supported."

"After initial legal analysis, the expectation is that teachers and administration will not have political flags, or religious messaging in their classroom or on their person. This expectation includes pride flags," Plum said at a July 26 meeting.

One board member asked if it was possible for teachers to wear crosses. Plum said he believed that would be acceptable.

"If it's something on their person and it's in a necklace or something like that and it's not in your face ... I think that is acceptable," Plum said.

"Back the Badge," "Thin Blue Line" and Black Lives Matter flags and signs would also not be allowed, as those have "political leanings," Plum said.

School board president Gary Vose voiced his support for the decision at the July meeting.

"This isn't a case where we're trying to discriminate against any group ... but rather just to bring clarity and allow staff to know ... where the line is drawn on these various things," Vose said.