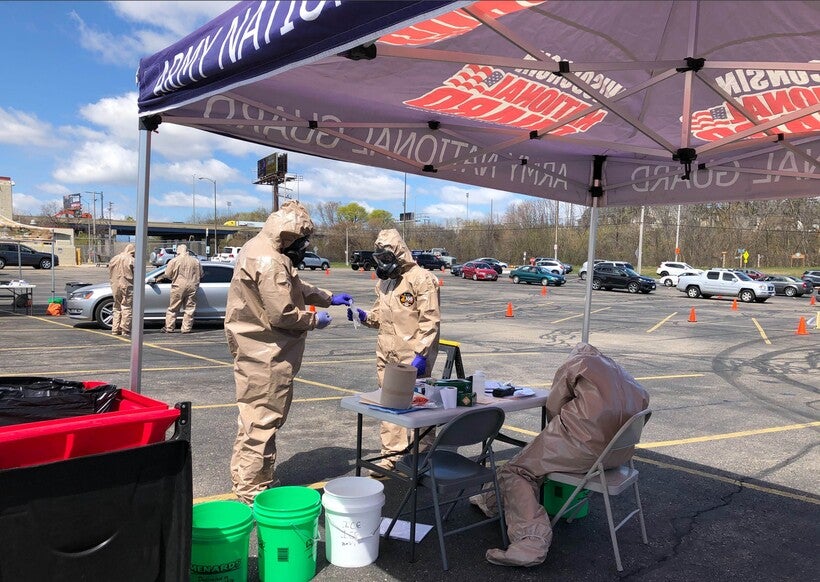 Members of the Wisconsin National Guard administer COVID-19 tests Monday, May 11, 2020 at the UMOS headquarters in Milwaukee. Guard members said they didn't expect so many people, but there are enough tests for everyone who wants one. Corrinne Hess/WPR

State Also Preparing To Test All Nursing Home Residents And Staff; Announce Where Outbreaks Are Occurring
By Shamane Mills
Share:

As state officials look for signs of whether it's safe to reopen Wisconsin, they hope increases in testing will provide data on how the new coronavirus is spreading, and if its spread is indeed slowing down.

As part of the "Badger Bounce Back" plan, Gov. Tony Evers' administration set a goal of testing 12,000 people per day for COVID-19. Currently, daily testing is less than half that, but the Wisconsin National Guard has set up more than a dozen free community testing sites around the state, including two in Madison and Milwaukee. Both drew large crowds when they opened on Monday.

Community testing in Madison will continue until June 6, depending on utilization, according to Madison Mayor Satya Rhodes-Conway, who recommended those who have insurance and a doctor utilize those resources so that others not able to get a test can access one at the Alliant Energy Center testing site.

Rhodes-Conway said it's important to test as many as possible, and that more than 340 were tested on the first day.

"With real data and insight into the progress we’re making, we will know with confidence when we can take the next steps toward reopening," Rhodes-Conway said in a statement. "Not only will we know where we are, but we’ll know if we backslide or continue making forward progress."

In Milwaukee, there were two community testing sites, one at Midtown Center on the city’s north side and one at United Migrant Opportunity Services on the south side. Due to the large response, city health officials said the Midtown location has since been changed to 5825 W. Hope Ave.

More than 1,900 people were tested Monday at both sites. Milwaukee health officials say if volume continues to be high, it's likely testing will continue through next week.

Workplaces and health systems are also conducting tests of employees. And state officials will test all staff and residents of nursing homes and other facilities where there have been outbreaks.

"Whenever we know we have a flare up we want to get out there, test people, make sure people are appropriately isolating and quarantining so it doesn’t spread further," Wisconsin Department of Health Services Deputy Secretary Julie Willems Van Dijk said during a DHS briefing Tuesday.

The state is currently investigating 235 outbreaks at various locations. This includes nursing homes, meatpacking plants and other companies, group homes and health care facilities. Almost half — 123 — are at nursing homes. Van Dijk said the state will release the names of specific nursing homes affected on Wednesday.

"We are working to increase transparency of where there is disease. In most cases, family members are going to already know this because the nursing home has already contacted them," said Van Dijk.

Maintaining supplies of personal protective equipment (PPE) across the state continues to be a concern. Some hospitals are reusing masks after decontaminating them. Meanwhile, assisted living facilities and nursing homes are doing everything they can to get more masks.

"We have gone through extraordinary efforts trying to find PPE. Assisted living facilities were given a lower priority in terms of accessing PPE so that was a real struggle and I think remains that way," said John Sauer, president and CEO of LeadingAge Wisconsin, which consists of more than 200 nonprofit member organizations, including nursing homes, assisted living and independent facilities and community service agencies.

He said nursing homes were able to get more PPE through the Medical College of Wisconsin. They have also received equipment through the Strategic National Stockpile which is designed to supplement state and local supplies during public health emergencies.

Sauer said over the next two months, the Trump administration indicated they’ll help nursing homes by providing a week’s worth of PPE twice during that time frame.

"I think we need to expect more," Sauer said during a Tuesday meeting of the Wisconsin Long Term Care Advisory Council.