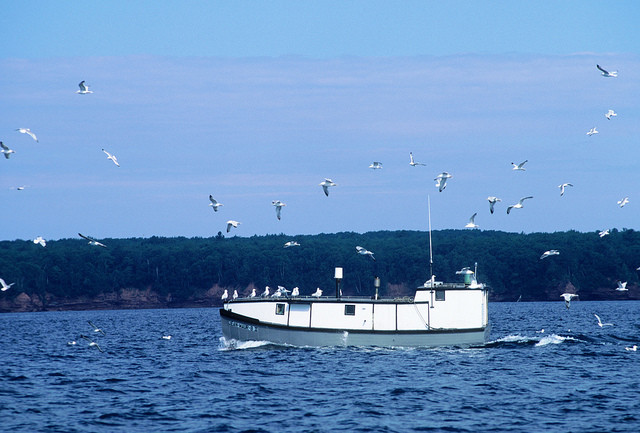 Commercial fishing operations near the Apostle Islands of Lake Superior are reporting record numbers of whitefish and a strong recovery of lake trout from a low in the early 2000s.

"We're averaging between 2,500 and 3,000 pounds of whitefish per day in the traps right now and releasing thousands of sub-legal fish," said Hoopman. "There's just multiple year classes of fish."

And while whitefish is the most sought-after species, Hoopman said he is also seeing strong numbers of lake trout as well after a decades-long population decline that began in 1950s.

A year class refers to all fish born in the same year.

Hoopman credited refuges near the Apostle Islands — where fishing is prohibited and where the fishing season ends Sept. 30, before fish spawn in October and November — for letting the whitefish and trout populations boom.

"We have a fishery that is protected here," he said. "It is of such utmost importance of our restricted use areas and the refuge that we have in place that have been there for a long time to protect these fish and also our closed season dates."

Brad Ray, a DNR fisheries biologist, said lake trout populations crashed during the 1950s and '60s due in part to the introduction of invasive sea lamprey.

The DNR, the Bad River Band of Lake Superior Chippewa and the Great Lakes Indian Fish and Wildlife Commission have worked for decades to target spawning lamprey to reduce their numbers, which Ray said has allowed the lake trout populations to recover. He said since 2007, the DNR has noticed a consistent number of young lake trout coming into the population.

"The recreational fishery has been booming and we have a higher quota than we did last year and catch rates have been through the roof. Everybody seems to be doing really well on the recreation side and there are a lot of fish out there in terms of lake trout," Ray said.

Ray also said he has seen strong numbers of younger year classes of whitefish in recent years. That's not surprising since the two species have similar feeding and spawning behaviors.

"There's a lot of smaller whitefish that we catch in our summer assessment that has smaller meshes than the commercial gear, but we see good numbers of fish coming into the fishery population, what can be harvested by the commercial industry," Ray said.

At the end of his presentation, Hoopman said if conditions hold and the younger whitefish and lake trout are able to grow to maturity, the Apostle Islands and South Shore region of Lake Superior will get a lot of attention for being a national sport fishing destination.