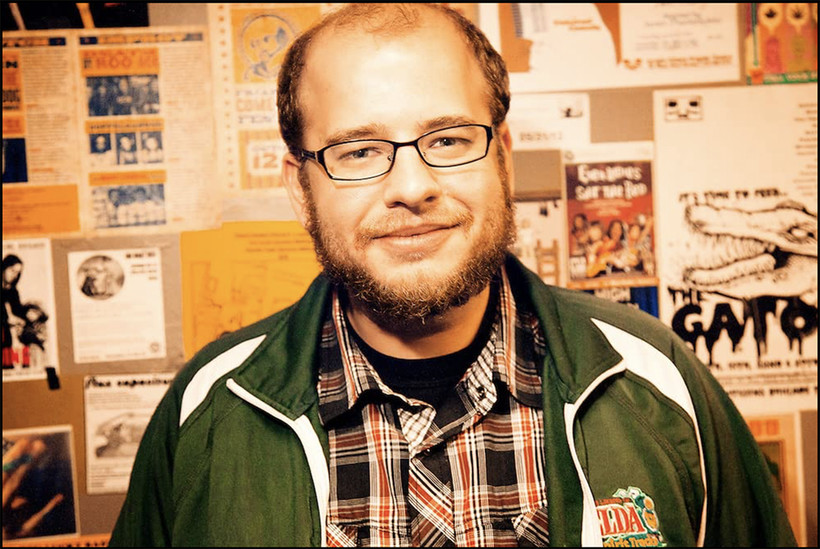 His Personal Journey Through One Of The Most Psychological Video Games Ever
By Adam Friedrich
Share:

Comedian Mike Drucker owes a lot of his writing career to his passion for video games. Before becoming the co-head writer and executive producer of the hit late night show, "Full Frontal with Samantha Bee" and even before a short-lived job at gaming giant, Nintendo, Drucker put himself on the radar with a series of hilarious articles about video games.

Drucker would parlay his early work into high-profile writing gigs at comedy series like "Adam Ruins Everything," "The Tonight Show with Jimmy Fallon" and an internship at "Saturday Night Live."

While at "SNL" Drucker was even portrayed by actor Zach Braff in the recurring sketch "Bronx Beat" with Amy Poehler and Maya Rudolph. For his part, Drucker is flattered by this portrayal.

"It's like if a popular band was like, 'We love you so much. We're writing a song about you,'" said Drucker. "It's a small character in a recurring sketch series. But it feels like I have this little, tiny permanent blip in existence on that show."

Seeing yourself parodied in an "SNL" sketch might be fun, but it isn't something everyone experiences. However, Drucker was one of millions of video game players who related to the visceral experience of the 2001 horror video game, "Silent Hill 2." Drucker writes about the power and legacy of "Silent Hill 2" and the personal impact the game had on him in his entry into the Boss Fight book series on seminal video games.

The game stands alone, both in the franchise and in video game history, for eschewing typical video game tropes of leveling up and unending combat for a more cerebral and psychological experience. In doing so, Drucker notes how the game addresses significant societal issues.

"The reason it was so unique for the time is because it handled very serious topics very maturely in a way few games had. Now, games have talked about war forever, but 'Silent Hill 2' was the first game that really, seriously dealt with emotional abuse," said Drucker.

"Silent Hill 2" was released at the height of the "survival horror" genre of video games made popular by the "Resident Evil" franchise. It was defined by its trademark fog that made for a creepy and disorienting gameplay as the player worked to uncover the unsettling secrets of the isolated titular town of Silent Hill.

As the protagonist — but definitely not the hero — James, the player meets a strange cast of loners who themselves are on dark journeys of redemption or regret. Characters like Eddie who was severely bullied and Angela who is suffering from trauma at the hands of sexual abuse.

"Eddie is this character that sort of looks like either a very overweight teen or someone in his early 20s, but sort of a look that I had when I was a very overweight teen," said Drucker. "I definitely related to someone who was so bullied or felt so bad as a teen that they turn inward and they become bitter and angry."

Drucker who is open and frank about his own experiences with sexual abuse also related to the character of Angela and her journey dealing with sexual trauma. The game doesn't treat it as a journey to be won and her story's conclusion is ambiguous and fitting.

"The first time I played it, I really didn't make the connection," recalled Drucker. " It wasn't until working on this book, when I played through the game a bunch of times, that I really started to develop a really strong attachment to her in terms of what she went through. I definitely felt a lot more sympathy for her and I definitely felt a lot of catharsis, especially at the end when she sort of goes on her own way and says nobody can help her but herself, which for that character is a huge growth."

As more and more landmark games from that era are getting remakes and remasters for current consoles and new generations of players, Drucker says the botched attempt at refining "Silent Hill 2" removed so much of the experience that made the game work in the first place. The 2012 HD upgrade — which Drucker likens to colorization of classic films in the 80's — retracked the voices, softened the differences between gameplay and cutscenes and — perhaps most egregiously — removed the patented fog.

"It's this abandoned town. It's spooky. You know, sometimes it transforms into something even scarier. So the fog gives you that effect. We all know fog and horror. However, the fog also helped systems reduce processing power. If you have a ton of fog, you don't need to process buildings in the distance because they're hidden by the fog. So it was a technique that really helped artistically and in the upgrade they were like, 'Oh, we don't need this fog anymore because we can just process these buildings.' But you remove the fog again, you remove a lot of the atmosphere."

Drucker says that the lack of ability to experience the game as originally intended will dampen its legacy. However, he said that the psychological elements of the game can be found in several current day games including the Amnesia series and 2020's game of the year, "The Last Of Us Part II."

"The game is pretty influential now. Neil Druckman who wrote 'The Last of Us' said the game was very important to him. It's this game that valued the character's internal strife. It's not what the characters can do. It's why they're doing it," said Drucker. "'Silent Hill 2' was one of the first big budget mainstream games to do this."