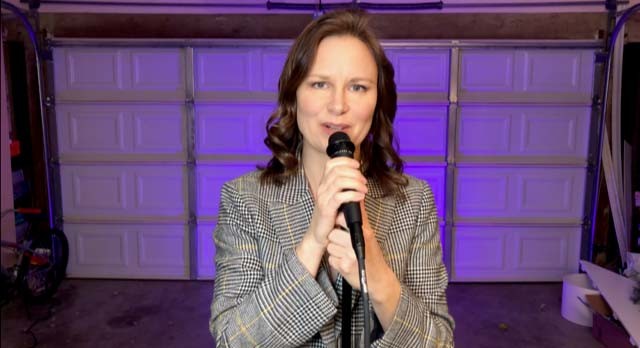 The '24' Actor Tackles Fame, Divorce, Dating And Living Through A Pandemic In Special
By Adam Friedrich
Share:

There's something about a garage. In pop culture lore, "garage-style" stands in as shorthand for hope and innovation. Indie bands begin in their garage. Start-up companies — most famously Microsoft and Apple — launch their legacies in garages. The space has become synonymous with creativity.

So it was in her garage that comedian and actor Mary Lynn Rajskub decided to set her innovating quarantine stand-up special, "Mary Lynn Rajskub: Live From the Pandemic."

Rajskub tells WPR's "BETA" she was already prepping material for a new special when the pandemic hit and brought all live performance art to a standstill. Her producing partner Chelsea Mitchell (who also directed the special) encouraged her to prepare the material anyway and produce the special even without an audience.

"So we lit it and made sure our sound was as tight as we could make it. And I did it in my garage with no audience so I could capture stuff that was happening in and around the pandemic in my life," Rajskub said.

Rajskub also used a scoring track to accompany her performance. She outsourced that to a friend of hers from The Comedy Store who is also a musician. Rajskub says the music wasn't necessarily there to compensate for the lack of an audience, but to heighten her delivery.

"I watched it without any sound and I thought, 'Wow, that's pretty cool! I'm glad I did this!' and gave myself a pat on the back. And then I handed it off to my friend, who's brilliant," Rajskub said. "But I'll tell you, when I watched it after the score was on, it really accentuated my odd way of telling stories."

Rajskub admits her comedic stylings aren't the typical call and response cadence most stand-ups use.

"I certainly don't have your typical rhythm that you would think comedians have," Rajskub said. "And I think this was also a really good exercise in that it suits my personality and my voice really well."

Rajskub — who is probably best known for her stint as computer ace, Chloe, from Fox's hit action drama "24" starring Kiefer Sutherland and stints with comedies like "Mr. Show with Bob and Dave" and "It's Always Sunny In Philadelphia" — tackles several themes in the special like fame, divorce, dating and life in a pandemic.

While she still feels a bit "cringey" discussing her surprise fame from "24" and the specificity innate to it, she said there was a level of catharsis in discussing her recent divorce which is more relatable to an audience.

In one of her stand-ups, she said:

"I actually got divorced right before the pandemic so I could really be alone. My divorce started when my husband left me. He's so quiet, I did not hear him leave. I just kept walking past the bathroom, and I was like, 'Something is different. Something is different,' and then I realized that one of the electric toothbrushes was missing."

This isn't the first time Rajskub has taken an innovative and cathartic approach to a universal conversation. Over a decade ago, she released the one-woman show, "Mary Lynn Spreads Her Legs" which became a powerful statement on postpartum depression.

"I think looking back on it, this was just part of my development as a writer and a performer," Rajskub said. "I, again, took that kernel of a lot of truth in there and then found these ways to heighten it within being dramatic and funny for stage."

While Rajskub's work on "24" doesn't seem like it would naturally have much influence on her comedy work, she said there was a lot of fun on set as the show walked the line of heightened drama and satirical, and she appreciated the show's ability to make you care about characters amongst the far-fetched plotting and pacing.

"You're at code red and that's where the show starts out. So you find these levels, and it was a really special club to be in because we all kind of understood it without speaking about it," she said. "That level where it's a nuclear bomb is going to hit you and you're the only one that can fix it? No, that's not going to enter into my stand-up, but certainly many times in storytelling, which is primarily what I do, I always have act outs that require acting. But it is more fun."

Rajskub is also pretty prolific in the podcasting world and has plans to compile her solo podcast transcripts and fresh writing into a future "memoir-ish" essay project.

"One of my favorite ones is just when I used to work at Denny's," she said. "But it's a whole chapter of just, you know, me making the ranch dressing at a Denny's. And I really enjoyed that one. And then the other ones are talking about the end of my marriage. So, yeah, it's a similar approach to my comedy."