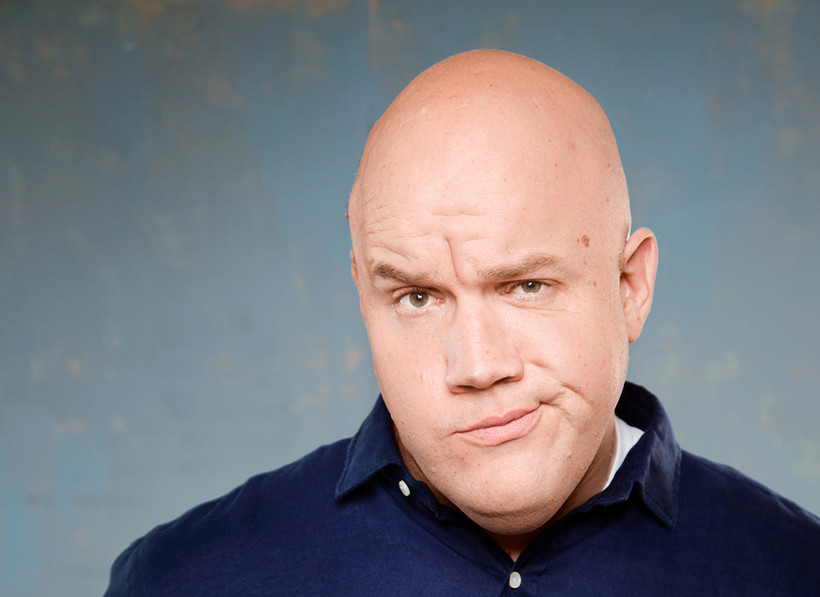 Comedian Guy Branum Is A Goddess

The 'Chelsea Lately' Comedian’s Memoir On The Art That Shaped Him
By Adam Friedrich
Share:

In Greek mythology, Leto is the goddess of motherhood and best known as the mother of Apollo and Artemis with Zeus. Escaping Hera’s — Zeus' wife — wrath, Leto wandered looking for a place to bare her children. While she rested, peasants mocked Leto for being an unwed mother. At that moment, Leto remembered she was a goddess and rose up. She wreaked havoc on the peasants and created her place in the world.

It is this myth, and specifically that line — "she remembered she was a goddess" — that was life changing for comedian Guy Branum. He reminds himself of it when inspiration is needed.

"For me, life has been a long series of events where I end up feeling kind of powerless or alone or not being able to really do anything to fix my situation. Then I remembered I was a goddess and I couldn’t necessarily fix my situation, but I could at least make some trouble," he told WPR’s "BETA."

"Even if I wasn’t making it rain or turning people into frogs, I was at least doing something to take some control of the world around me back," he said.

It's why Branum titled his memoir, "My Life as a Goddess: A Memoir Through (Un)Popular Culture" as a reminder to never forget who you are.

As a bookish kid, Branum has had several similar revelations while reading or consuming art. He admits it is tough to frame a story "about you being changed by art."

Branum’s passion for the arts and pop culture stems from his childhood. He grew up in a rural farm town in northern California. He offers that rural farm communities in California do not have the same vibe as similar towns in the Midwest and that they lacked the cultural touchstones.

"I went to towns in Minnesota and Wisconsin that were tiny, but they had community theaters, they had bands. In northern California, there was none of that stuff," Branum said. "In this place that was deeply anti-intellectual, very working class, to me it was just amazing that there was PBS and books and encyclopedias that could show me other places."

Branum began watching stand-up comedy in the boom of the 1980s. His favorite stand-up performance was Eddie Murphy’s "Delirious." Branum was enthralled by Murphy’s "sense of power, agency and swagger."

The performance inspired Branum to pursue comedy, but it also ignited a deep self-reflection. As a gay man, Branum realized that "the first five minutes or so of Eddie Murphy 'Delerious' is him just talking about how disgusting gay people are."

"It was a fascinating moment to realize that this thing that really did make me fall in love with stand-up and in many ways defines the style of stand-up that I do today also was full of homophobic messages that really informed my understanding of myself as a gay man," Branum said. "It was a really hard process to try to reconcile those two things. To say that this piece of art was very valuable to me and very damaging to me at the same time."

Branum doesn’t have the answer that explains the cognitive dissonance that occurs when someone from an underrepresented group enjoys the work of someone that’s positioned to repress them. But it does not stop him from trying.

In November 2017, Branum penned an essay discussing the fallout of the Louis C.K. sexual harassment saga. In it, he argued that as long as the media representation of comics — best depicted in C.K.’s FX show, "Louie" — was of an exclusive boy’s club, this culture of harassment remained possible.

"I was essentially saying that as long as we have these deeply male heterosexual power structures within our business, it’s going to be easy for people to do things like what Louis C.K. did," Branum said.

Branum states that the career of a stand-up comic is unstructured and that there is no human resources department. He says that the community watches over itself and that can be problematic for underrepresented groups in the comedy world.

"Having the people in charge be all straight guys means women, trans people, queer people; there’s nobody looking out for us," he said.

Branum hopes his memoir can help too.

"I hope that when people get done with it they look at their own lives a little bit differently and they think about the struggles that they have had as powers as much as struggles," he said.