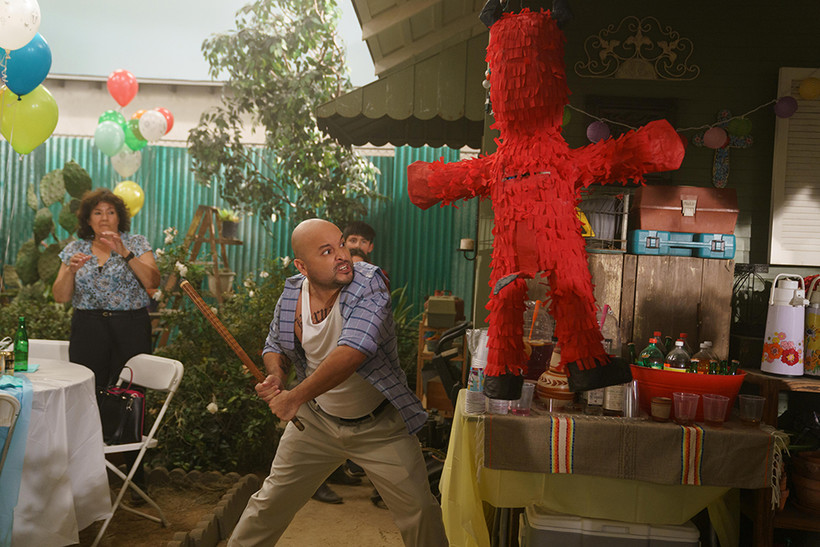 Frankie Quiñones as Luis in "This Fool" Tyler Golden/Hulu

The comedian behind the Cholofit and Juanita Carmelita viral sketch videos adds a new character for Hulu's 'This Fool'
By Adam Friedrich
Share:

When he was growing up, comedian Frankie Quiñones noticed his parents watched a lot of stand-up comedy. Whether it was George Carlin, Richard Pryor, Paul Rodriguez, Eddie Murphy or Louie Anderson, the Quiñones family watched religiously.

"They always had stand-up on in the house, even when I was a kid," Quiñones tells Wisconsin Public Radio's BETA. "They would just tell me to cover my ears in the bad parts."

Frankie was inspired by how powerful the humor could be and how it could get his parents through some tough times in their life. He decided that when there weren't comedy specials on TV, he'd supply them.

"I found a sprinkler head in my dad's truck, and I just pretended it was a microphone and I started performing for my family in the living room," recalls Quiñones.

"I just kind of never stopped. I got in a lot of trouble messing around in the classroom, but I was just always trying to do something to make people laugh."

Frankie didn't just stop at his dad's tools. He'd often raid his parents' closet for props as well. He'd create outlandish characters that were rooted in his Latino upbringing.

"Whatever I could find. My dad's clothes. My mom's clothes. I got some of my sister's stuff. Anything I could find around the house to just get into some kind of character and just try to put on a show," Quiñones says.

Eventually, Frankie's stage would stretch beyond his living room. His character Juanita Carmelita, a play off his mom's spiciness and humor, became a popular character and sketch video series on YouTube.

But it was his character of the cholo, Creeper – based off his "old school" father's style – that would go viral.

"Creeper is an extension of my father," says Quiñones. "He just always represented that style, that culture. Like always had his Dickies creased, his white T tucked in. And always drove a lowrider, but always there for me. Always driving me to little league practice and one of the most positive people that I know."

The "Cholofit" sketch video surpassed 4 million views on YouTube and put Frankie on the map.

"When the Cholofit video went viral, I was like, 'Oh, man, people are drawn to his physicality and stuff like that.' So, I started watching a lot of old Buster Keaton videos. Three Stooges. Benny Hill. All those legendary old school physical comedians. Even Mr. Bean," says Quiñones.

"Physical comedy is universal and so there was a bunch of people around the world just drawn to it. So, I was inspired by that."

Now Frankie's playing a new character, Luis, for the Hulu comedy series, "This Fool" created by his friend and fellow comedian Chris Estrada.

Luis – who Quiñones describes as both "likable and dumb" – is a parolee living with his cousin, Julio (Estrada), and his Tia. The show mines Luis' Austin Powers-like complications with a world that passed him by while he was in prison. Once again, Frankie was able to draw on his own family's experiences to help flesh out the character.

"I've had cousins in and out of prison as we were growing up and so I kind of drew from them," says Quiñones. "Fortunately, a lot of them got their act together and they're all about their family now."

"I had to draw from this the side where Luis could be kind of a little bit intimidating sometimes, or just maybe like a loose cannon, like, 'Oh, what is he going to do?' Like a Joe Pesci kind of vibe to him."

"This Fool" finds another vein of comedy in the Odd Couple back and forth between Luis and Julio, who is a counselor for a rehabilitation program called Hugs not Thugs.

Julio's efforts to mentor his cousin and other ex-convicts are tripped up by his co-dependent relationship with his on again, off again girlfriend, Maggie (played by Michelle Ortiz) and Luis' antics.

"(Julio) likes to help everybody else, but he obviously can't help himself," Quiñones explains, suggesting that in real life the two share a similar dynamic.

"Our relationship is like that. Chris and I toured for almost four years together where he would be opening for me, and we were always together," Quiñones says. "I think that a lot of that chemistry translates on camera. A bunch of our costars always comment on that. They're like, 'Man, they're almost the same off camera because we're constantly talking smack to each other.'"

The show also centers the working-class Latino community of South Central Los Angeles. Frankie takes a lot of pride in the fact that "This Fool" is telling their story and experiences and spent a lot of time to capture that vibe correctly but doesn't feel the need to hit you over the head with themes or messages.

"Even if you're from a different background, when something is that authentic, you're still drawn to it like, 'Oh man, these are real people.' And so, once you get them in there, the funny stuff just comes up pretty organically," he says.

And to Quiñones, who knows firsthand the comfort of laughter, the funny is all that matters. Or as Luis puts it, "Laughter is the best Tylenol."

"We just wanted to make something funny, you know, like just give people a chance at something easy to watch," he says. "We weren't trying to be like, 'We're the voice of all Latinos,' you know what I mean? We were just like sharing our story, being real and authentic and just being funny. Like, that was the main goal. Just make it funny, man."

"This Fool" is streaming on Hulu.