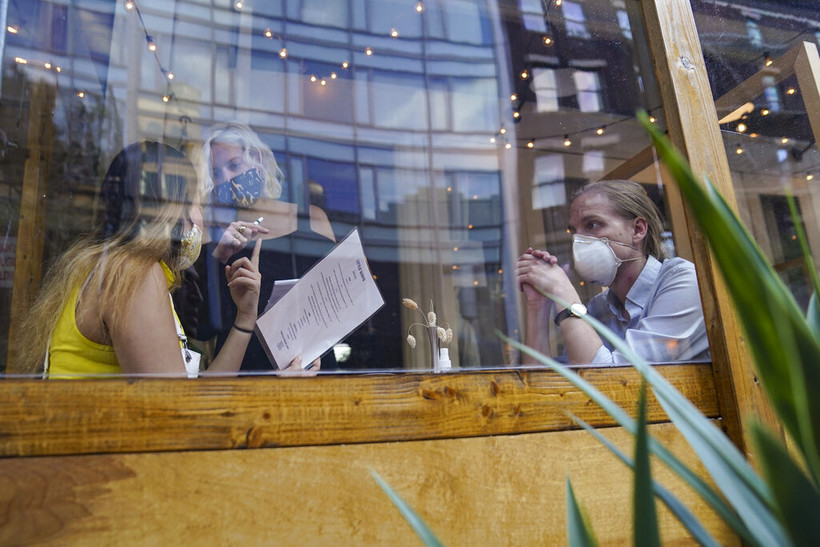 Diners are served at a restaurant amid the coronavirus pandemic, Saturday, Oct. 3, 2020, in New York. John Minchillo/AP Photo

A day after COVID-19 cases in Wisconsin topped more than 3,000 and the state reached a record 907 hospitalizations, a new coalition of business, education and health groups has formed in hopes of controlling a virus that's spreading much faster in the state than it is in most of the country.

"Unfortunately, Wisconsin is one of the hottest of all the COVID hotspots in the United States," said Wisconsin Hospital Association Chief Medical Officer Mark Kaufman, who noted that only Texas and California have had more cases in the last seven days. Those states have vastly larger populations than Wisconsin, he added.

WHA is part of the effort called "Stop the COVID Spread!"

Restaurants and bars have both seen revenue hits because of the pandemic. But only the Wisconsin Restaurant Association is listed as a coalition member. The Tavern League is not.

Organizers of the coalition say it was put together very quickly due to the urgency of the current public health crisis the state is facing, and additional members are expected.

Coalition efforts will include statewide public service announcements as well as a digital advertising campaign "in the five figures," said WHA President and CEO Eric Borgerding. The advertising campaign will urge Wisconsin residents to take preventive measures — like mask-wearing, social distancing and handwashing — "seriously" in order to prevent hospitals from being overwhelmed, protect workers' health and prevent further shutdown of Wisconsin businesses, according to a press release.

"It is a two-way street. The protocols set in place at a business is only as good as how they are followed, both by the business and those who patronize the business," said Wisconsin Restaurant Association President and CEO Kristine Hillmer during an online press briefing Friday.

Many of the precautions the group is urging people to take have likewise been emphasized by Gov. Tony Evers, along with other state and local health officials, for months. Despite this, COVID-19 cases continued to rise and now all seven of the state’s health care emergency readiness regions are seeing "record or near-record numbers of hospitalized COVID patients," warned Kaufman.

One preventive measure, face coverings, has been especially controversial and is being challenged in court by the conservative Wisconsin Institute for Law and Liberty.

"What we know is masks work," Borgerding said. "And whether it’s through a mandate or through very vigilant use and encouragement of using masks, we know that it works."

Local health departments struggling to keep up with testing and contact tracing welcomed the coalition efforts.

"The coalition is showing true leadership at a time when our local public health departments and healthcare systems are under considerable strain. We need everyone to understand how serious the situation is, and do their part to protect our communities," said Jamie Michael, director of the Wisconsin Public Health Association in a statement.

A look at the graphs that chart the course of the pandemic in Wisconsin shows an uneven path: a recent steep climb preceded by gentler increases and decreases. With each dip or rise, hospitals tried to adjust by restricting visitors and postponing non-urgent surgeries.

On Friday, Madison’s three hospitals announced they're assessing how to make room for COVID-19 patients while continuing elective surgeries and non-urgent procedures. In a joint statement, UnityPoint Health-Meriter, SSM Health St. Mary’s Hospital and UW Health said that, in limited cases, such services may be postponed.

In March, hospitals across the state postponed some surgeries in order to preserve doctors, beds and other resources for COVID-19 patients.

But then the curve started to flatten at the end of May as new cases rose at a slower pace and the WHA urged people not to put off care. Doctors say some went without treatment for serious illness out of fear of contracting COVID-19, resulting in a steep drop in patients and revenue for hospitals.

At that time, COVID-19 cases were relatively steady. The seven-day average was around 500 positive tests daily, according to data from the Wisconsin Department of Health Services.

Since then, daily cases have increased nearly five times that amount. On Oct. 3, the seven-day average hit a high of 2,450.