People who shop for groceries online can now add another item — alcohol — to their list, but only in communities that allow such purchases.

In a growing number of cities around Wisconsin, grocery stores are asking municipalities to extend their liquor licenses so they can bring alcohol purchased online out to a customer's vehicle.

The so-called "click and collect" option is relatively new. Retailers tout the service as a convenience to customers. Critics say it could allow minors to buy alcohol and provides easier access to a substance the state is known to overindulge in.

In 2017, Walmart and Pick 'n Save were the first retailers in Wisconsin to offer curbside pickup of beer, wine and spirits in the Milwaukee and Fox Valley areas, respectively. Other stores soon followed.

But retailers are finding it a hard sell in some cities. 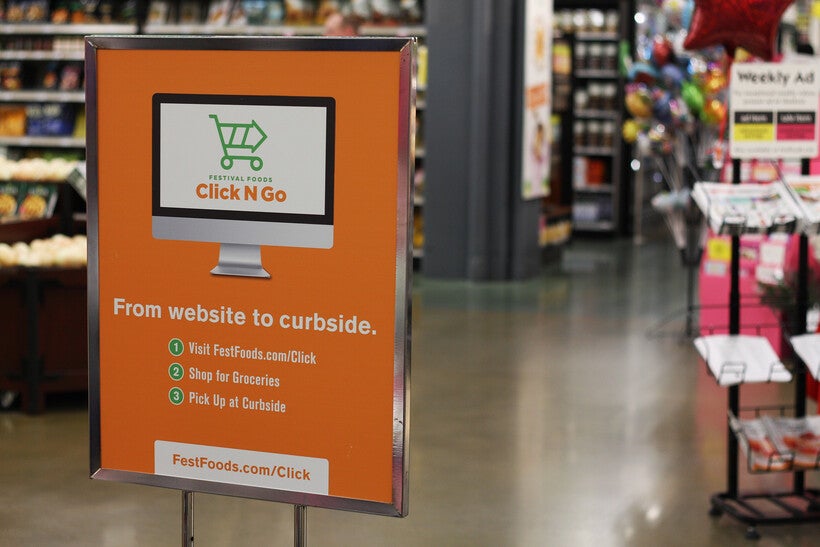 Festival Foods on East Washington Avenue in Madison offers a "click and collect" program where shoppers can order groceries — including alcohol — online and drive up to get it at their convenience. Jenny Peek/WPR

Despite heated debate among Madison officials, community reaction so far has been ho-hum.

A Tenney-Lapham neighborhood meeting was held at Festival Foods in early March prior to the retailer offering the service at its East Washington Avenue location in Madison. The community meeting drew only four people: Ledell Zellers, the district's then-alderwoman, the neighborhood association president and two city of Madison police officers.

Most stores have been low key about promoting their expansion of online grocery shopping to include alcohol; so customers may not even be aware of the service if it's new, while others may be hesitant to use it.

Ezra Ostlie was shopping at the Festival Foods on Madison's east side early one evening. He was buying items to make dinner for his girlfriend. In his cart, he had fresh fish, vegetables and a six-pack of beer. The 24-year old could have ordered it online and picked it up four hours later using what Festival Foods calls Click N Go. But he likes picking out some purchases in person, not on a computer screen. 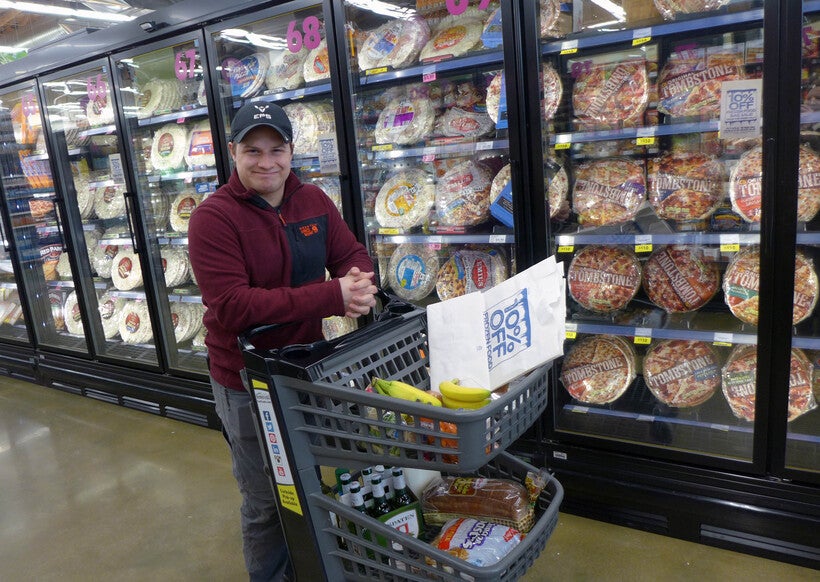 In this March 2019 photo, Ezra Ostlie shops at the Festival Foods on East Washington Avenue in Madison. Shamane Mills/WPR

"People with kids, you know, don't want to bring their kids in," said Zellers.

She voted to allow curbside pickup of alcohol at grocery stores even though she said she has mixed feelings about it.

"They can just pick things up including beer or wine," she said. "The other side of it is, as most people probably know, we are a state that is known for drinking and sometimes binge-drinking."

And that's why curbside pickup has been a non-starter in Neenah, where Alderwoman Marge Bates helped lead the charge against online alcohol. She said it could make binge-drinking worse in the Fox Valley — something that gets splashed across the national news whenever there's a story on alcohol consumption.

She laments that Neenah's efforts to burnish its image as "family friendly" are undermined by its proximity to a college town, Oshkosh, which a student newspaper editorial referred to as "Sloshkosh" in 2015.

"Neenah is conservative with alcohol outlets and where alcohol can be consumed," Bates explained. "We're very family-oriented, very family-friendly. Our parks do not allow it. We do not sell it at gas stations because of the connection with driving. We also have a sober server law."

The city of Neenah has been asked to amend retail liquor licenses to permit curbside pickup of alcohol ordered online, but it hasn't happened yet. Grocery stores say Wisconsin has strict alcohol laws and that they follow procedures to make sure alcohol doesn’t get into the wrong hands.

"There's a few municipalities we asked that did not allow curbside pickup of alcohol but they’re the exception rather than the rule," said James Hyland, vice president of communications for Roundy's Supermarkets which operates Pick 'n Save, Metro Market and Copps stores in Wisconsin. 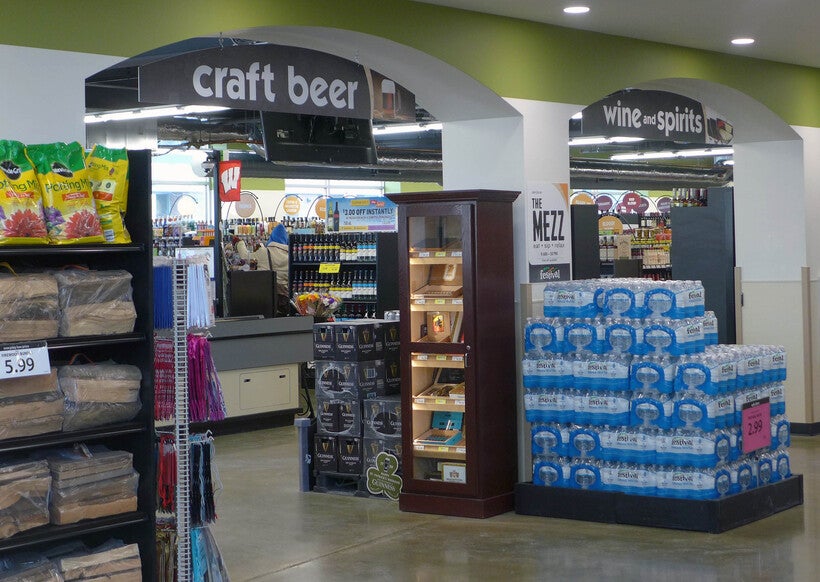 People between the age of 25 and 34 are driving the online trend, although retailers hope it will catch on with older shoppers, too.

"The millennials have really been the early adopters of the overall e-commerce trend," Hyland said. "Clearly, they're the demographic that appreciates the curbside alcohol pickup option. The demographic, though, is really spread across the entire spectrum of our customer base." 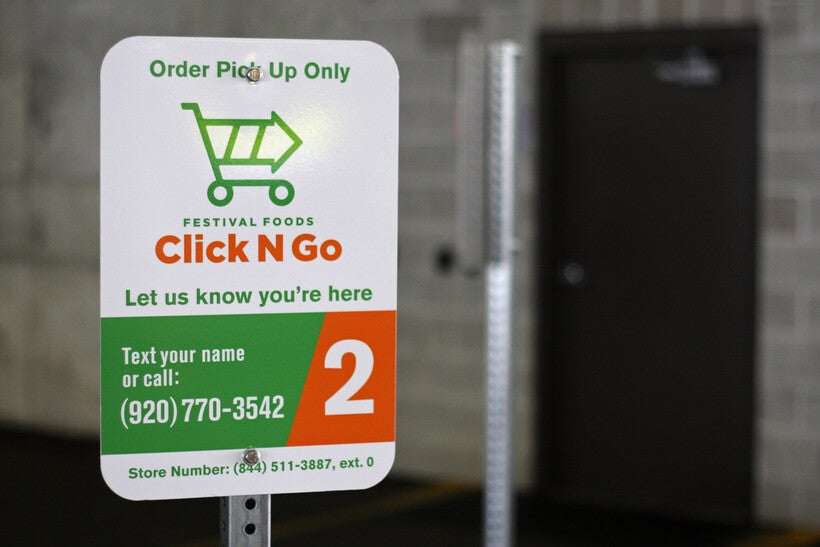 Festival Foods on East Washington Avenue in Madison offers a "click and collect" program where shoppers can order groceries — including alcohol — online and drive up to get it at their convenience. Jenny Peek/WPR

This spring, the League of Wisconsin Municipalities provided its members an analysis of click-and-collect services along with questions policymakers might want to consider.

Despite the reservations of some public officials, grocery stores expect online shopping to grow rapidly.

"Does it exacerbate an existing problem? Does it create a new problem? I think those are legitimate discussions people should have, but when you get right down to it this is a customer service issue. This is something people want. It’s not being forced on anybody," said Wisconsin Grocers Association President Brandon Scholz.

He predicts someday online grocery sales will be the norm and will be double the amount of purchases made in store.

Right now, curbside pickup of groceries ordered online in Wisconsin is estimated to be between 1 and 15 percent, the lowest in the nation. 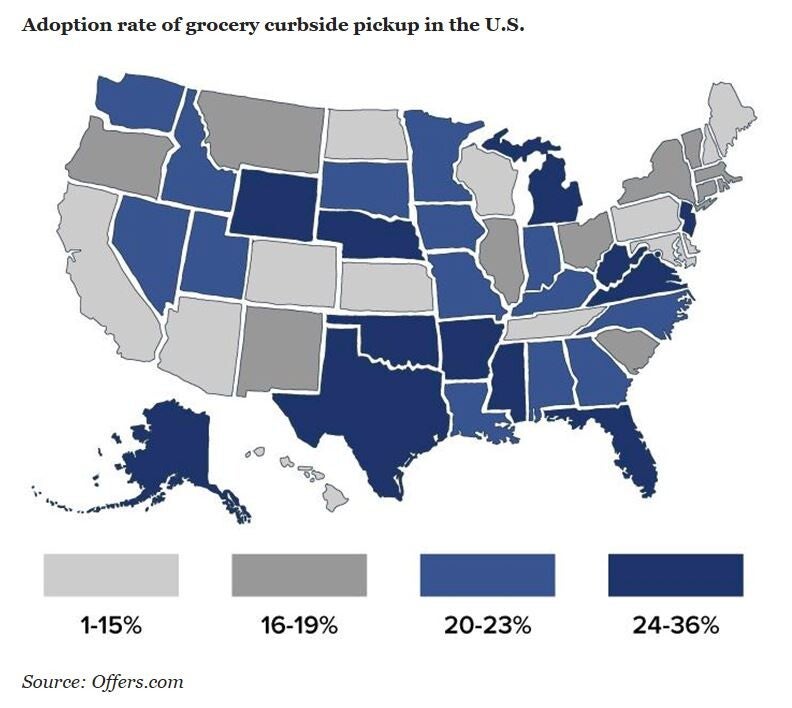