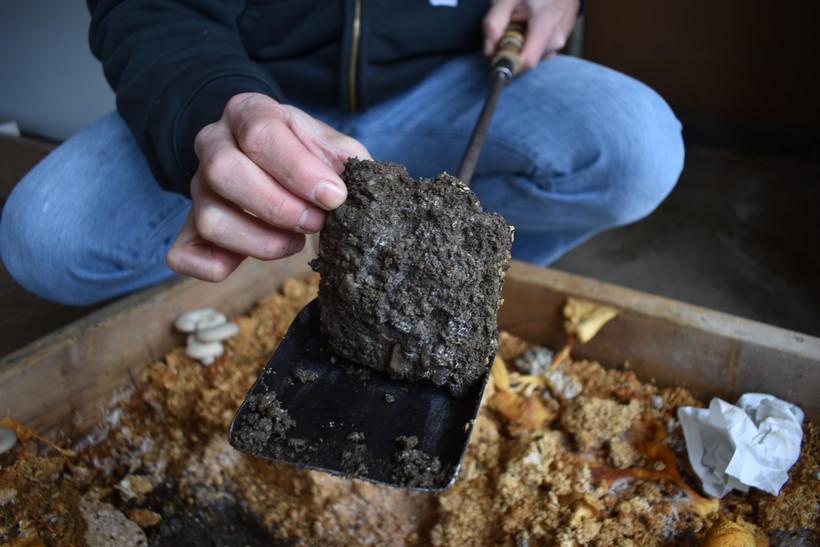 Jerome Segura holds a soil sample where mushrooms grew as part of an experiment in "mycoremediation," or using fungus as an environmental cleanup tool, in Marathon County, November 12, 2021. Rob Mentzer/WPR

In the garage of a vacant farmhouse at the Marathon County landfill, mushrooms are growing in contaminated soil.

The soil was the site of an oil spill in the Fox Valley. Plants won't grow on it. It's not safe to leave it. In fact, there's not much that can be done for it: The usual result of such a spill is that all the contaminated soil needs to be dug up and carted to the landfill.

The mushrooms may hold the key to changing all that. They're part of an innovative pilot project to study the effects and potential applications of "mycoremediation," or cleaning soil by growing mushrooms on it.

This study is using pearl oyster and Italian oyster mushrooms — gourmet varieties. Mushroom farmer Jerome Segura, whose Stevens Point-based business Segura Mushrooms sells all over the country, takes a sample of the soil from one container, noting the dense network of mycelium that has grown below its surface.

"It's definitely penetrating in, which is good," said Alex Thomas, a graduate student at the University of Wisconsin-Stevens Point and a researcher on the project, which is being run by the Marathon County Solid Waste Department.

The mushrooms here are 10 weeks old at this time, and still growing despite the chilly mid-November weather.

"Those are good-looking mushrooms; I could sell those at market," Segura jokes.

But these are the last soil samples the team will take from this experiment. From here, the samples are headed to the lab, where scientists test whether growing the mushrooms here effectively cleansed the soil of contaminants. 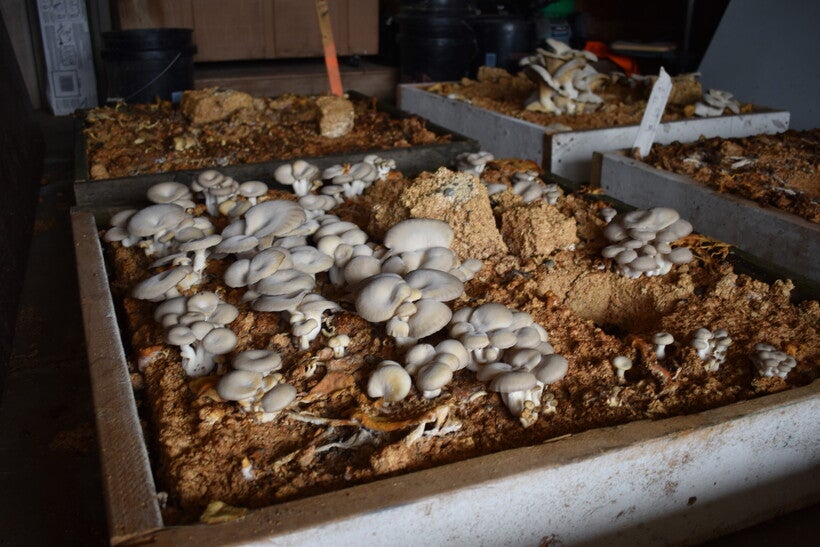 Mushrooms grow in a garage at the Marathon County landfill as part of an experiment in environmental cleanup. Rob Mentzer/WPR

Mycoremediation isn't widely practiced in the United States, but scientific studies out of Germany, Finland and elsewhere support the idea that growing mushrooms can be a surprisingly effective way to clean up soil. A study out of India even found mushrooms removed 100 percent of certain contaminants from soils.

In central Wisconsin, solid waste department director Meleesa Johnson teamed with Segura, Thomas and Solid Waste Management Board member Ashley Lange to create the study. The pilot launched in September, and they're expecting preliminary results in December. In the meantime, the team already has plans to expand the experiment and test other uses and applications.

Johnson said it's part of the department's mission to consider "how we can be better stewards of the land by finding alternative uses for waste materials."

"Our control soils, if you dig into it, it smells like oil," Thomas said. After mycoremediation, the soil "came back smelling really clean — to me it almost smelled like baby powder. That's an early indication that hopefully we'll see some results."

Petroleum is a fossil fuel, made of carbon. Mushrooms can feed on the organic compounds and break down the lignins that bond them. Previous studies have shown that they not only remove the petroleum-based contaminants from the soil, but also break them down in such a way that even the mushrooms themselves are nontoxic. You wouldn't want to eat them, but they can simply be composted back into the now-clean soil.

In other uses, such as soil contaminated with heavy metals, the mushrooms would become toxic materials that require disposal at the landfill. But they would take a fraction of the space required to dispose of contaminated soil. 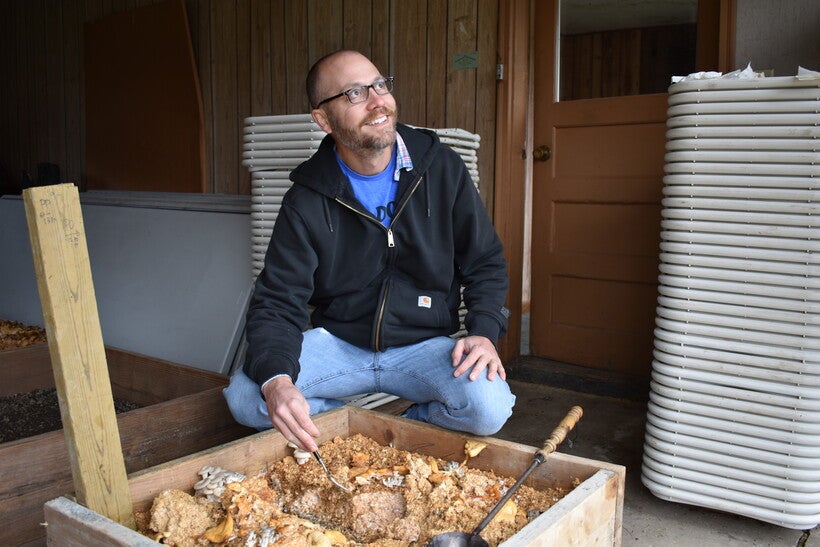 "Traditional methods would be to excavate the dirty soil, haul it away and dispose of it in a landfill," Segura said. "What we're actually trying to do is spread mushroom compost on top of the dirty soil on site, and have all of this done in a way that the soil is never really disturbed."

It's all preliminary, and Johnson acknowledges that lab tests could show little change or not enough cleanup potential to make mycoremediation a plausible alternative.

The team is planning separate studies this winter to test whether mushrooms have any utility in cleaning up PFAS, the "forever chemicals" linked to cancer risks that have been found to make drinking water unsafe in multiple Wisconsin communities.

"All the systems (for dealing with PFAS) are really just sequestering them," Johnson said. "They don't break them down. Could mushrooms be used on PFAS? ... That's what we have to find out."

In practice, that application is probably a long way off. But even in this early stage of research, it's a measure of the potential mycoremediation advocates see in the technique.

"We've been stagnant in the world of solid waste management for a long time," Johnson said. "It's when we step outside the box like this that we are actually moving toward something else."