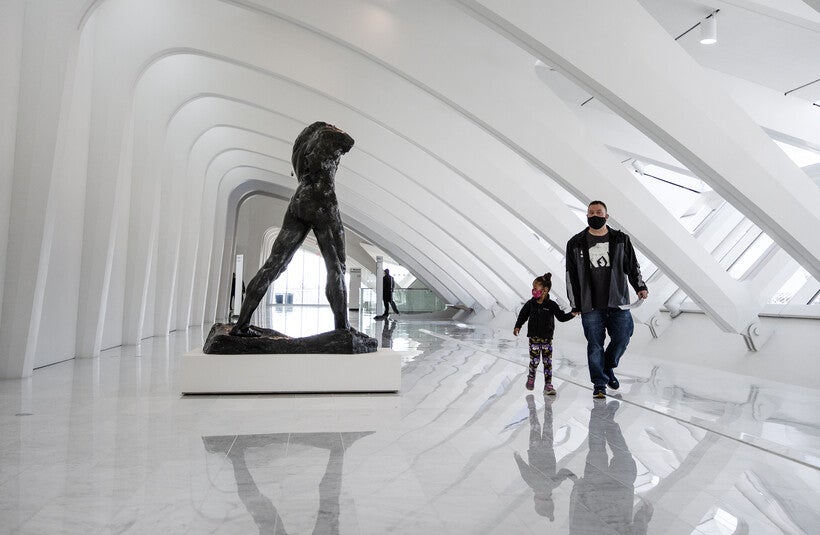 Paul Ducat and his daughter, Norah, walk to the galleries Friday, March 5, 2021, at the Milwaukee Art Museum. Angela Major/WPR

The city of Milwaukee will lift nearly all of its COVID-19 restrictions next month.

Beginning June 15, Milwaukee will no longer impose limits on gathering sizes for businesses or events, city officials announced Thursday during a virtual press conference. Milwaukee’s health restrictions have been in place since the pandemic began 14 months ago.

The city’s mask ordinance will still remain in place.

Milwaukee Mayor Tom Barrett said the pandemic is not over, but it is time to begin moving forward.

"I know this last year has been a sacrifice for everyone," Barrett said. "Lives have been lost and disrupted. Personal and economic consequences have been severe. But because of everything you did, we are moving in the right direction."

Capacity limits at festivals and sporting events, including the Milwaukee Bucks and Brewers, will also be lifted, although it will be up to individual teams to decide if they want to increase capacity. The Brewers announced they would return to 100 percent capacity June 25.

"This is great news for our fans and our community," Rick Schlesinger, Brewers president of business operations, said in a statement. "We appreciate the support of Mayor Barrett and Milwaukee Commissioner of Health Kirsten Johnson in getting us back to full capacity."

Earlier this week, the Bucks and Brewers announced they were increasing capacity to 50 percent. (The Brewers will put the new capacity guidelines in effect starting Saturday. The Bucks will implement the new guidelines starting with the NBA playoffs later this month). Representatives from the Bucks could not immediately be reached for comment.

Johnson said the coronavirus is still present in the city, but cases have declined enough that she feels comfortable lifting restrictions.

"I think we’re reaching a point where we are recognizing this disease is going to exist in our population, it’s going to be endemic," Johnson said.

Johnson said the city will continue to monitor the number of cases.

"If at any point it starts to look like anything that occurred last fall, we’ll have to put restrictions back in place," she said. "The goal is for that not to happen, we really want people to be vaccinated and for us to move forward as a community."

As of Monday, 29.5 percent of the city's population was fully vaccinated, according to the Health Department.