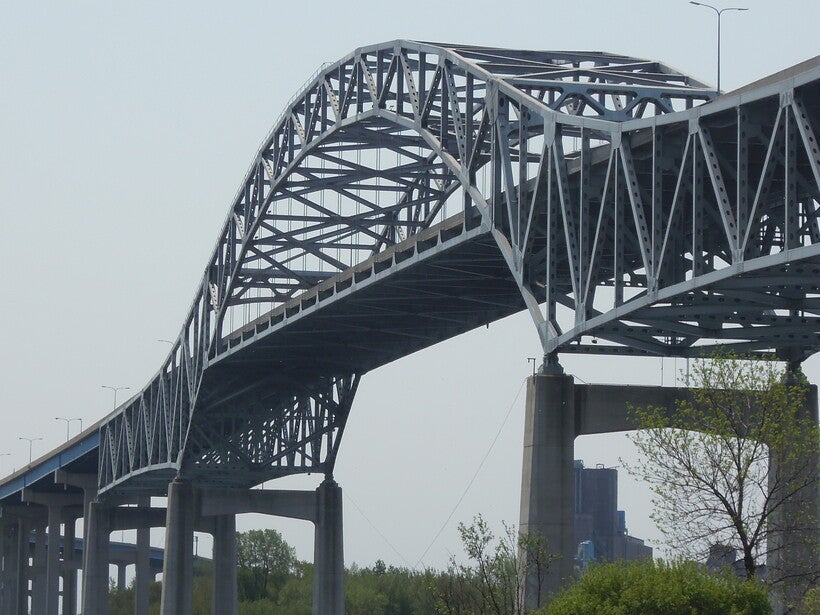 The Blatnik Bridge first opened in 1961. After 60 years, the bridge is deteriorating and nearing the end of its useful life. Around 33,000 drivers use the bridge each day to travel between the two cities. Danielle Kaeding/WPR

Biden set to visit Superior a day after his State of the Union address to Congress
By Danielle Kaeding
Share:

President Joe Biden is visiting Superior on Wednesday to promote the $1 trillion bipartisan infrastructure law that local officials are hoping can be used to repair aging bridges and roads and create jobs in the process. Biden is visiting the far northern Wisconsin city a day after he delivers his State of the Union address to Congress.

Local leaders and union officials are eager to hear more details regarding how the money may benefit the city, including Superior Mayor Jim Paine.

"Because we have significant infrastructure needs, the greatest of which … is the Blatnik Bridge project," he said.

The Minnesota and Wisconsin Departments of Transportation are looking to replace the aging bridge that crosses the St. Louis River and connects Superior to Duluth, Minnesota. The project is estimated to cost $1.8 billion, including inflation. Construction is expected to begin in 2028.

"It's a slow planning process. But it's a very, very urgent need, not just because it's an old bridge, but it's just not functional for 21st Century use," Paine said. "It doesn't serve the cities of Duluth and Superior the way we need it to, and so I'm really hoping he's going to talk about that bridge and ways we can speed up that project."

After more than 60 years of use, the bridge is deteriorating and nearing the end of its useful life. The bridge opened in 1961 and is being inspected every year to ensure its safety. It's currently under load restrictions because of deficiencies in the bridge's primary trusses. Around 33,000 drivers use the bridge each day to travel between the two cities.

Minnesota and Wisconsin are working together to secure federal funding for the project, which they hope will cover the majority of the project's cost. That cost would be split 50-50 between the two states. But because it qualifies as a major interstate bridge for Wisconsin, funding its replacement requires legislative action and approval.

Kyle Bukovich, president of the Northern Wisconsin Building & Construction Trades Council, said any funding for the Blatnik Bridge, roads or water infrastructure would be greatly welcomed.

"Especially since we are climbing out of COVID," he said. "We're such a rural area up here. A lot of these road projects are much needed to boost the economy and provide more family-sustaining jobs."

He added the region is "overshadowed by Madison" and has struggled to obtain funding to address its deteriorating roads. Local leaders and community members have long lobbied for a half-percent sales tax to increase funding for road repairs, but those requests have met opposition from Republican lawmakers.

Biden last visited Wisconsin eight months ago when he touted the $1.2 trillion infrastructure plan in La Crosse prior to its approval by Congress in November. He last visited the Twin Ports region during his 2020 presidential campaign.

The passage of the bipartisan infrastructure law marked a significant victory for Biden and the largest infusion of federal funding for the nation’s aging infrastructure in decades.

The infrastructure law includes $550 billion in new spending over five years. About $650 billion would be shifted from existing funds and projects. The plan devotes $110 billion for roads and bridges and provides $55 billion to address the nation’s deteriorating water infrastructure and eliminate lead pipes. There's $65 billion to expand broadband internet.

Tylor Elm, president of the Superior City Council, said the infrastructure funding could accelerate a $31 million plan to build a city-owned broadband network.

"We're going to take and make use of any grant that's available, and that includes the infrastructure law," Elm said. "We’ll absolutely be looking at all those resources to make the connections possible at an affordable rate, helping solve the digital divide, planning for the future, in terms of having fast connectivity for everyone."

Superior’ mayor said the city has selected a contractor for the broadband project and hopes the city council will sign off on that selection by the end of March. Paine also mentioned that $1 billion in funding through the infrastructure law could help to clean up the St. Louis River, one of the Great Lakes' most polluted sites.

The president’s visit comes as Biden has announced new sanctions against Russia amid its invasion of Ukraine and the subsequent surge in oil and gas prices. Securing domestic energy production was addressed in a statement from the Republican Party of Wisconsin.

"If Joe Biden wants to talk infrastructure during a global state of emergency, he should commit to maintaining pipelines like Line 5 and restart construction of Keystone XL. His record against miners is in direct opposition to the values of northern Wisconsin,” said Anna Kelly, spokesperson for the party.