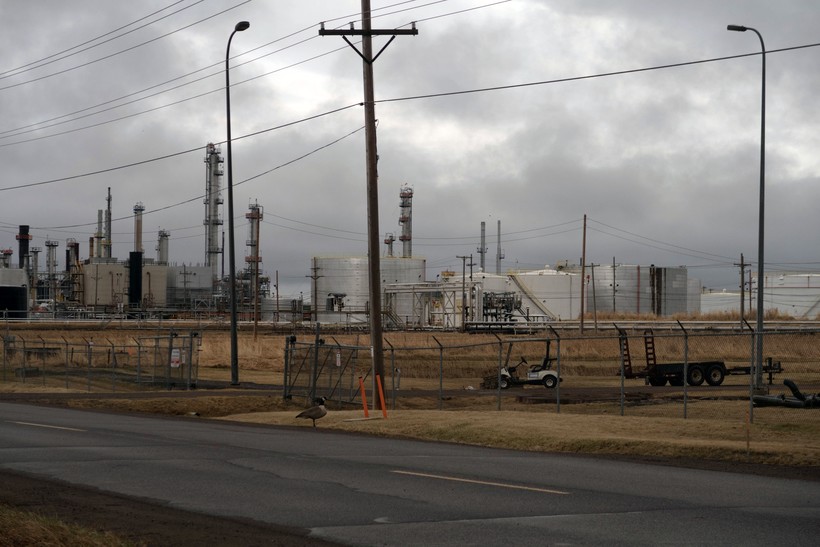 US Chemical Safety And Hazard Investigation Board To Do Metallurgical Analysis
By Danielle Kaeding
Share:

The initial explosion at Husky Energy's oil refinery in Superior took place in the fluid catalytic cracking unit, a senior advisor with the U.S. Chemical Safety and Hazard Investigation Board said Tuesday.

"That is a part of the distillation process where the crude oil is being heated and extracted to create gasoline and petroleum-based products," said Tom Zoeller, senior advisor for the CSB.

A series of explosions and fires at the refinery last Thursday injured at least 20 people and forced a temporary evacuation in the city. Zoeller said they plan to do a metallurgical analysis of the unit to understand why it failed.

That type of analysis is designed to look at the physical and chemical properties of metal and is often done to determine failures or flaws in a piece of metal.

"What they will look to determine is were their cracks in the metal, fatigue in the metal, that weakened it during the process of the shutdown when there were temperature or pressure changes that the metal failed and gave way, causing it to break apart," said Zoeller.

He said the safety board usually hires consultants to conduct an analysis to determine if any flaws or cracks existed in metal that caused the unit to fail. However, Zoeller said it's unclear if the agency contracted with a consultant since it's still early on in the process.

The refinery was preparing for a five-week turnaround when the incident occurred. Zoeller said start-ups and shut-downs are generally the most dangerous periods for refinery operations.

"There needs to be greater attention to detail because you’re dealing with products and systems that work with different pressures and temperatures," he said. "Those, if they’re not closely monitored, can create problems."

The investigative team hasn’t been able to access the interior of the refinery since they arrived late Thursday because it’s not structurally sound, Zoeller said. The team hoped to begin examinations within the refinery within the next several days or week.

The safety board’s four-person team has been meeting with management to request documents, conduct interviews with employees and collect photographic evidence for the investigation. Zoeller said he expected the agency’s team to remain on site for the next week.

The CSB investigates chemical accidents, identifies whether there are any gaps in safety that can be addressed, and makes recommendations. The agency does not have any enforcement authority or issue penalties related to their findings.

Zoeller said the agency investigated a similar case at the BP America Refinery in Texas City, Texas, where a series of explosions occurred, killing 15 people and injuring 180 workers. A distillation tower that was being restarted became overpressurized, leading to the explosion.

Officials with the U.S. Environmental Protection Agency have been monitoring air quality near the refinery and surrounding community since last Thursday. They’ve been working with the Wisconsin Department of Natural Resources on water quality testing to monitor any runoff from the refinery in addition to water monitoring by the company. The agency determined Husky was using adequate resources to monitor air quality Monday.

"The EPA has been involved in the development of the company's long-term air monitoring plan," said EPA spokeswoman Rachel Bassler in a statement. "EPA remains ready to return with air sampling capabilities should another event occur."

The DNR is also overseeing water cleanup and an oil boom that has been placed in Newton Creek to prevent any residual oil or firefighting product from reaching the Hog Island Inlet.

Kim Guttormson, spokeswoman for Husky Energy, confirmed Tuesday that company President and CEO Rob Peabody was in Superior meeting with employees and answering their questions.

"It’s important for me to be here, on the ground, to see the refinery with my own eyes, to assure employees that Husky remains committed to them, and to offer my thanks to the many first responders for their professionalism and bravery," said Peabody in a statement. "We are working with government agencies on their investigations and we have launched one of our own to find out what happened and to make sure something like this doesn’t happen again."

The use of hydrogen fluoride at the refinery prompted the evacuation last Thursday. On Tuesday, Superior Mayor Jim Paine posted on his Facebook page that he spoke with Peabody and chief operating officer Rob Symonds.

"I asked them to discontinue its use and convert to a safer chemical process and to report back to me on any and all cost and infrastructure challenges that might prevent them from doing so," wrote Paine. "In the meantime, I asked them to disclose all of the safety measures they had and still have in place that prevent this chemical from harming the public as well as any other relevant facts regarding HF so that the public can remain informed during this debate."

Paine had earlier said that alternatives to hydrogen fluoride should be examined. Duluth Mayor Emily Larson also called for the refinery to end use of the toxic chemical on her Facebook page Tuesday.