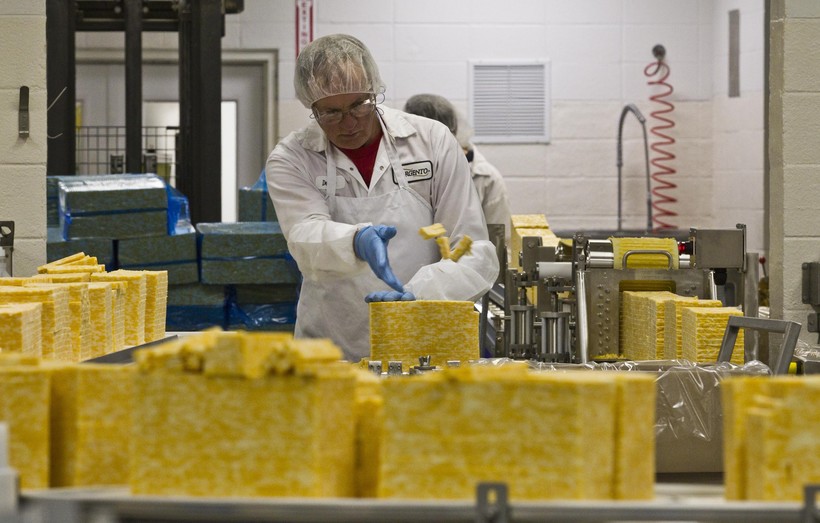 Despite American's love for cheese, consumers haven’t been able to keep up with the nation’s supply.

While Americans consumed 37 billion pounds of cheese in 2017, the nation’s surplus of cheese reached 1.4 billion pounds late last year, a record high since the United States Department of Agriculture has been keeping track.

Measuring in at 900,000 cubic yards, that mountain of cheese is equivalent in size to the U.S. Capitol building.

"It's not an ideal situation," he said. "But … one thing I like to note is that the surplus … is a constant, there’s always cheese in storage and it's only going up about 2 percent a year."

So, how did it happen? In short, the oversupply of milk is driving it.

The U.S. has increased milk production by 13 percent since 2008, yet at the same time the days of drinking milk with every meal are long gone as more Americans are opting out or replacing it with nut milk alternatives. In the 1970s, Americans drank about 30 gallons of milk a year, today, it’s closer to 18 gallons.

To pick up the slack of declining milk consumption, excess milk is turned into cheese because of its longer shelf life. While cheese consumption hasn't been able to break even with production, cheese consumption in the U.S. has remained strong — even increasing marginally each year.

While Umhoefer said it’s not a cause for panic, a cost does come back on dairy farmers and cheese makers.

"There's actually a cost for storage … that perhaps they hadn't anticipated," he said. "It does have a depressing effect on the cheese market and ultimately the price that's paid to dairy farmers."

Brian Gould, a University of Wisconsin-Madison professor of agribusiness, expects this degree of excess to be a temporary situation.

"The industry ... is not alarmed to a large degree, I mean there is some concern of course if these stick around, but I haven't seen a tremendous drop off in those cheese prices over the last six, seven months," he said.

Changes in the market for nonfat dry milk — the other most common thing to turn excess milk into — could take the pressure off cheese, Gould said.

"The price of nonfat dry milk ... is increasing," he said. "And so the thought being that we should see some declines in those cheese stocks as we go through time because more milk is going to be shifted into nonfat dry milk production and less into cheese manufacturing."

The year 2018 was also slightly unusual from other years because it hasn't seen the seasonality dip yet, Gould said. Typically come fall and winter, the excess supply drops because people eat more cheese, then peaks in summer because cows are more productive in the spring.

"Those stocks are burdensome, and if they stick around it could be a significant event,"  he said. "But I'm cautiously optimistic that those stocks are going to go down with what's going on into the nonfat dry market."