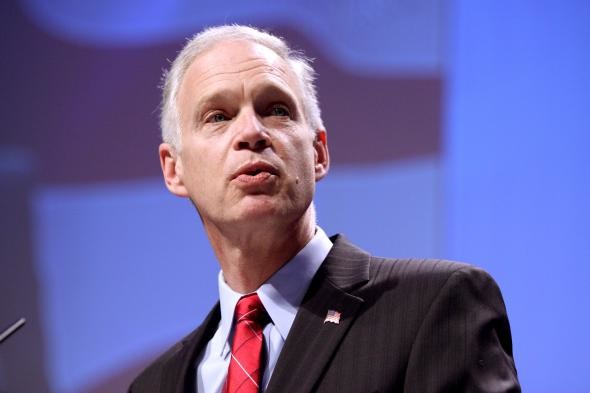 In A Change From 2016 Stance, Ron Johnson Favors Vote On SCOTUS Nominee

Four Years Ago, Johnson Said He Opposed Confirming Justices Until After A New President And Senate Were Elected
By Shawn Johnson
Share:

Wisconsin Republican U.S. Sen. Ron Johnson said Saturday that he supports confirming a new Supreme Court justice this year, an about-face from 2016 when he said the process should wait until after a new president and Senate were elected.

Johnson's comments came the day after the death of Supreme Court Justice Ruth Bader Ginsburg, as President Donald Trump said he might nominate a new justice as soon as next week and Senate Majority Leader Mitch McConnell promised to give the nominee a vote.

Ginsburg, who died at 87 after a battle with pancreatic cancer, was one of four justices nominated by Democratic presidents to the U.S. Supreme Court. If Trump moves forward with his nominee, and the Senate confirms them, it would give conservatives a 6-3 majority.

"That puts the American people in charge really by their votes in November in terms of what direction the Supreme Court is going to take," Johnson told reporters on May 6, 2016.

Days later, after Johnson met with Garland, he issued a written statement on May 10, 2016, unequivocally opposing a vote on a nominee before a new president took office.

"Let the American people have a voice in the composition of the Supreme Court," Johnson said. "Instead of a lame duck president and Senate nominating and confirming, a new president and Senate — elected by the people only a few months from now — should make that important decision. I can’t think of a fairer or more democratic process."

Johnson's office did not respond to a request for comment Saturday, but in interviews with the Milwaukee Journal Sentinel and Wispolitics, he said the situation was different now than in 2016 because the same party controls both the Senate and the White House.

"Right now, we don’t have divided government," Johnson told the Journal Sentinel. "That makes all the difference in the world."

Asked by the newspaper why "letting the voters decide" doesn't apply when the same party controls the Senate and the White House, Johnson said, "It's just the reality of the situation."

"President Trump was elected for a term that runs into January. Republicans have control of the Senate until the end of this Congress. We should fulfill that constitutional duty,” Johnson told Wispolitics.

Johnson pointed to a story in the conservative National Review that showed presidents throughout history had nominated Supreme Court justices to fill vacancies in election years, and Senators had historically confirmed nominees from their own party.

Wisconsin Democratic U.S. Sen. Tammy Baldwin, who favored a confirmation vote for Garland in 2016, issued a statement Saturday arguing that Republicans should heed the standard they set four years ago.

"If Ron Johnson shatters the trust of his constituents by voting for a nominee before the next Senate is seated, he will cement his legacy as a disgrace to Wisconsin and demonstrate to voters that he is unworthy of public office," Wikler said.

Collins said in a statement Saturday that the decision for a lifetime appointment to the Supreme Court should be made "by the President who is elected on November 3rd."