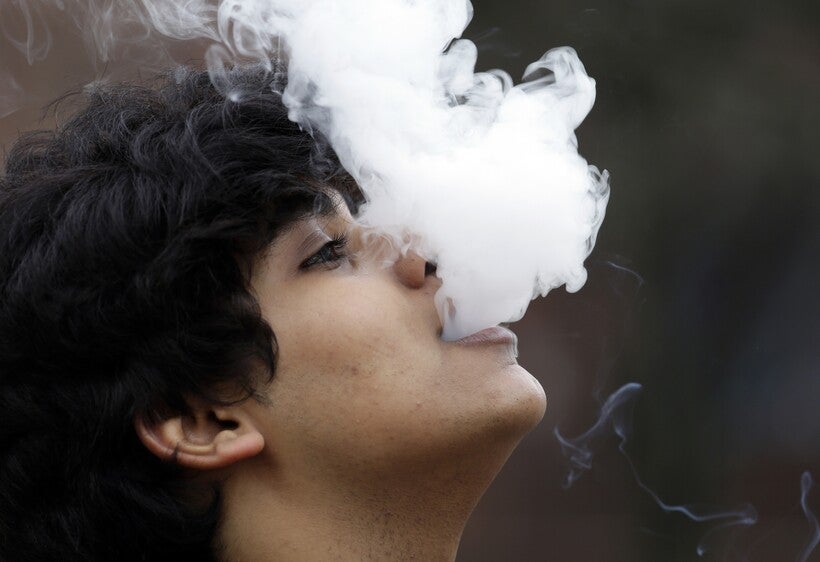 In this Jan. 7, 2016 photo, a man who declined to be identified blows out a cloud of smoke as he puffs on a small pipe outside at Seattle Central College in Seattle. Elaine Thompson/AP Photo

Cases Of Lung Disease Linked To Vaping Surge Across US

In Wisconsin There Are 43 Suspected Cases In 15 Counties
By Shamane Mills
Share:

Federal officials said Friday cases of severe lung disease associated with vaping are likely to rise from the 215 already confirmed nationwide. Altogether there are 450 suspected cases in 33 states across the United States, according to the Centers for Disease Control and Prevention. Wisconsin has 46 possible cases.

The health crisis was first noticed in Milwaukee when a cluster of young adults were admitted to Children’s Hospital of Wisconsin with symptoms of fatigue, difficulty breathing and weight loss in early July.

Three people have died in Illinois, Indiana and Oregon, officials said. A fourth death is still being investigated for a connection to inhaling substances contained in vaping cartridges. All reported using e-cigarettes prior to seeking treatment.

Jon Meiman, chief medical officer for the Wisconsin Department of Health Services, said a joint investigation with Illinois began after cases started showing up in Milwaukee.

"About a third of the patients needed mechanical ventilation, you know, assistance of a breathing machine. The remainder needed some other support," he said Friday.

Dr. Dana Meaney-Delman, who is leading the CDC’s investigation into the illness, said "while the investigation is ongoing, the CDC is advising that individuals consider not using e-cigarettes because as of now this is the primary means of preventing the severe lung disease."

It’s too early to single out specific cigarette products or substances that could have caused the health problems, according to an article in the New England Journal of Medicine. Because there’s no evidence of infectious lung disease in the patients, the illness is likely due to chemical exposure, officials said.

The Food and Drug Administration is testing 120 samples of e-cigarettes which are being analyzed for nicotine, THC and other cannabinoids, cutting agents, pesticides, opioids and poisons, said FDA Center for Tobacco Products director Mitch Zeller.

"The samples we’re continuing to evaluate show a mix of results and no one substance or compound — including vitamin E acetate — has been identified in all of the samples tested," said Zeller.

It’s believed vitamin E was mixed in with some e-cigarette cartridges of cases examined in New York.

As of Thursday the Wisconsin Department of Health Services had 46 suspected cases of severe lung disease in 15 counties.