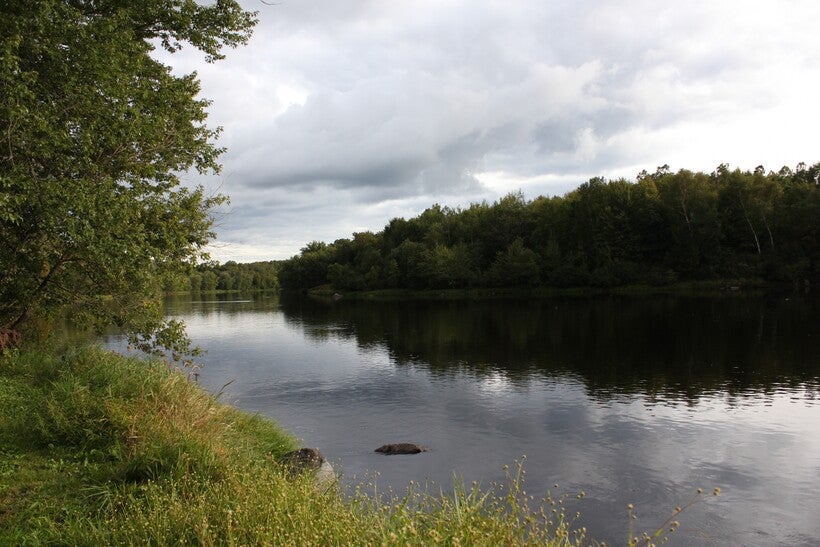 This body of water was once the site of the Flambeau Mine. Rich Kremer/WPR

Plans to conduct exploratory drilling for gold and copper in north-central Wisconsin appear to be moving ahead now that a Canadian mining company has received an exploration license.

GreenLight Metals, a Toronto-based company, submitted a $5,000 bond to the state and received an exploration license on Feb. 17 doing business as Green Light Wisconsin. The license expires June 30, but can be renewed.

The company also filed technical reports with Canadian authorities this month on the Reef and Bend mineral deposits in Taylor and Marathon counties, stating the deposits contain copper and gold reserves of "economic interest" that warrant further exploration.

The Bend deposit, located within the Chequamegon-Nicolet National Forest in Taylor County, contains 4 million tons of mostly copper and gold. The Reef deposit, which is roughly 12 miles east of Wausau in Marathon County, contains around 454,000 tons of gold reserves.

According to the reports, the company plans on conducting an exploration program "in due course" for the Bend deposit and begin compiling data on the Reef site this year. Even so, the company would need more approvals before it begins drilling, according to Ben Callan, chief of the integration services section at the Wisconsin Department of Natural Resources.

"They would have to take another step of filing a notice of intent with the department," said Callan. "Then, in that submittal, they would detail what their plan is."

Callan said the company plans to collect updated information on wetlands and surrounding habitat during the growing season that would be incorporated into its plan. Additional permits might be necessary.

In a statement, GreenLight Metals President and CEO Dan Colton said officials haven't finalized a timeline around their plans.

"GreenLight is in the process of filing the paperwork required to obtain the necessary permits and authorization for work to begin so we can provide a significant economic boost to the region while protecting our environment and transitioning our country as it accelerates toward green, clean energy," said Colton.

The transition to clean energy technologies is set to increase demand for minerals like lithium, nickel and copper, according to the International Energy Agency. Gold isn't listed among them.

A 2021 report by the agency said demand for copper is expected to grow more than 40 percent to reach goals under the Paris Climate Agreement, adding existing mines would supply 80 percent of copper needs by 2030.

The company has four prospecting permit applications that are pending with the U.S. Bureau of Land Management, which officials hope to receive this year.

The company's geological consultant recommended drilling seven boreholes in two phases at the Bend site. At the Reef site, drilling would be conducted in grids at six sites with 15 boreholes in each grid. The cost of the exploration is expected to run around $1.3 million combined.

Metals like gold and copper that occur in sulfide ore bodies haven't been mined in Wisconsin since the Flambeau mine shut down in 1997. The mine served as a catalyst for the state's sulfide mining moratorium that was repealed in 2017 under a law passed by the Republican-controlled state Legislature.

The moratorium required companies to prove other mines operated and then were closed for 10 years without causing environmental harm. Industry officials hope the 2017 law will open the door to mining and bring high-paying jobs, while environmental groups and tribes fear it will lead to environmental degradation.

Both the Bend and Reef deposits are near water resources that include the north branch of the Yellow River in Taylor County and Eau Claire River in Marathon County.

The pending permits at the Bend site would cover sections of the Kidrick Swamp State Natural Area. The state's nonferrous metallic mining law includes state natural areas as land deemed "unsuitable" for mining. The Milwaukee Journal Sentinel reported residents near the Reef site have feared any development of that deposit may pollute another state natural area: The Dells of the Eau Claire River.

Blouin said technical reports filed by the company are early estimates of resources that exist.

The company's consultant cautioned its findings relied on historical data, saying verification and redrilling are necessary. The reports added there can be no assurance the resources might become economically viable.

GreenLight Metals is among many companies that have showed interest in the deposits.

Aquila Resources last explored the Bend and Reef mineral deposits in Taylor and Marathon counties a decade ago.

Aquila is the same company that sought to build the Back Forty mine near the Menominee River on the Michigan-Wisconsin border. The project experienced setbacks on its mining and wetlands permits last year, and Gold Resource Corp. bought Aquila in December. Gold Resource is conducting a feasibility study of the project and hopes to obtain permits next year.