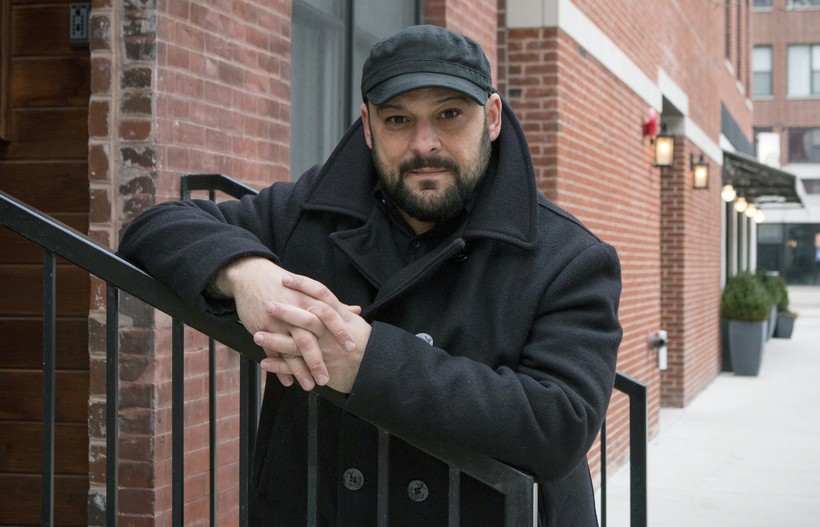 In this Jan. 9, 2017, photo, Christian Picciolini, founder of the group Life After Hate, a domestic program dedicated to helping people leave white power groups including neo-Nazi organizations and the Ku Klux Klan, poses for a photo outside his Chicago home. Teresa Crawford/AP Photo

Can You Change The Mind Of A White Supremacist?

This week marks the one-year anniversary of the deadly Unite the Right Rally in Charlottesville, VA. Christian Picciolini knows that world intimately. He joined America’s first neo-Nazi skinhead group when he was 14 years old. He rose through the ranks of what would become the Hammerskin Nation, one of the most violent white-power groups in the world. He went on to front a white-power punk band, White American Youth, writing songs that inspired — among others — Dylann Roof. Then he had a baby and a change of heart.

In 2011, Picciolini co-founded the nonprofit Life After Hate. He works intensely, one-on-one, to help people leave hate groups, particularly white supremacy groups. His method is compassion and forgiveness. And according to him, it works.

Last year, Picciolini reached out to Richard Spencer — one of the organizers of the rally in Charlottesville. "To The Best of Our Knowledge's" Charles Monroe-Kane talked with him about that meeting.

Christian Picciolini: Richard Spencer is famously known as the Nazi who was punched by an antifa member or the person who said "Hail Trump" in D.C. after Trump won the election. I think most people would recognize him as one of the most prominent faces and voices of the white supremacist movement in America today.

In December of 2016, there was an incident in Whitefish, Montana. Most people don't know this, but he lives there about 50 percent of the time while he lives another 50 percent of the time in Virginia. Richard Spencer's mother was involved with a Jewish real estate agent and they had a falling out. A white supremacist web site called the "Daily Stormer" attacked the Jewish community, published their names, their photos, their phone numbers online and they received thousands and thousands of death threats and a threat of an armed march in their town. Richard Spencer was a part of the terror that came to this community. I was asked by the community to come speak to them because they wanted to understand what was happening.

I tweeted to Richard Spencer and said, "Hey, I'm in your hometown. In fact, I'm speaking about you tonight. If you're in town, you should stop by." I certainly never expected him to respond. But he showed up.

Nobody really knew he was there; he walked in when it was dark. After I finished my talk, the last question I received was: "Obviously you're aware of Richard Spencer and the damage he's done to our community. What would you say to him if he were standing in front of you right now?" I simply turned to the balcony in the audience and spoke right to Richard and I said, "Richard, would you like to go out for a cup of coffee?"

We met for two hours after that.

CP: First of all, I’ve heard everything he has to say. I used to say it. So, when Richard would try to feed me propaganda or try to shift the conversation to one of ideology, I would ask him a simple question – like, how his relationship was with his daughter, or what's his relationship like with his father. I think I did shock him a little bit because he’s not used to being asked questions like that and probably has never really thought about how to answer them.

He comes from extreme privilege. He's very isolated. I believe he's struggling with an identity crisis. I think there are a lot of issues at play there.

Most people like to think of these people who do these awful things as monsters. And I was one of those people.

CMK: And you weren't a monster.

CP: I wasn't a monster. I was a broken individual who was willing to do monstrous things to get attention. Most of the time they're blaming other people and they're wishing ill on the other because of things that happen in their lives not necessarily perpetrated by those other people, but they're rationalizing their own pain, their own self-hatred, or projecting it onto other people to diminish their own pain.

CMK: At one point you ask him if you can hug him. Really?

CP: Yeah. I wanted him to know that if there was ever a voice in his head that caused some confusion, I would be a welcoming, friendly ear for him to vent to.

CMK: So you're available now if he gives you a buzz at two in the morning and says, "Oh my God I'm hurting, I want to change. Help me out?"

CP: In theory I am there for him for that. It hasn't happened yet and we've had a couple of conversations since then that have not turned out quite so well. I hope there is a moment someday where he realizes and takes a step back from this moment of fame that he's experiencing and says, "My God, I've set this world on a course that is destructive." Just like I did. It may or may not happen, but I can guarantee you that there aren’t a whole lot of people that are willing to give him a chance right now. And if there's nobody willing to give him a chance, the chances of him going down a better path are slim to none.

CMK: It seems so complicated to get out of hate.

CP: It is very complicated, not only because there's hard work to do but because there is such a stigma around having been involved and the belief that once you've done that you can never change. That is the biggest struggle for most people when they decide to leave. No matter what I do, will people still judge me for what I've done? There's a lot of amends that need to be made and there’s accountability. So even 30 years after the amends that I’ve made, I still know that I planted all these seeds of hate many, many years ago that I will forever pull the weeds from.

CMK: What do you do if a skinhead that you work with falls off the wagon?

CP: I'll introduce the haters to people they think they hate. I've spent dozens of hours with Holocaust survivors and Holocaust deniers and Islamophobes and Muslim families and homophobes and LGBTQ communities. Because once you've met somebody that you think you hate and you realize that hate comes from demonization and it's suddenly destroyed by humanization, it's really hard to walk back from that.

CMK: For many years you saw minorities, gays and Jewish people as the "other," the person you hated. Now many people see the kid with a swastika on his neck as the one to hate. What should we do with that guy? Because it makes me mad. It scares me.

CP: We should be scared, because when people are lost in this ideology, myself included, we were capable of anything. There were times when I was very adamant about committing acts of violence and even mass acts of violence during that period. Every single person in that movement, whether they are part of a group, or a lone wolf, or just indoctrinated online, has gotten to that point because they have felt marginalized or broken. We cannot continue to marginalize them further because that just pushes them further away.

Now, I'm not suggesting everybody hug a Nazi like I did with Richard Spencer, but we need to bring them in closer.