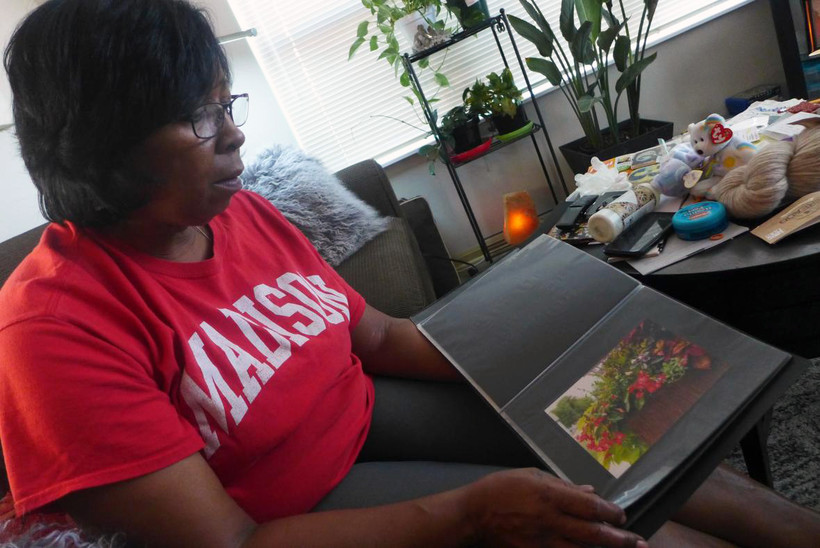 Carmen Evanco shows off a portfolio of her work as a professional gardener. She previously worked for the University of Wisconsin-Madison. Now she does landscaping for private clients. Shamane Mills/WPR

Health Care Was A Top Issue In Campaign; Protections For Pre-Existing Conditions, Expanded Care For Poor At Stake
By Shamane Mills
Share:

Carmen Evanco had a potentially life-threatening health problem two years ago. At the time, the Madison resident didn’t realize what was happening. It wasn’t until she got to the hospital that she found out she was having a heart attack.

"I just had this weird stomachache all day that was annoying," recalled Evanco, 56. "And I ended up going in, thinking maybe it was an ulcer or something like that. I almost didn’t go because I wasn’t sure about the status of my health insurance at the time."

There had been a technical error processing Evanco’s Medicaid eligibility. Her income hadn’t changed but her coverage appeared to be in jeopardy. In the end, it all worked out: Medicaid, known as BadgerCare in Wisconsin, paid for Evanco’s angioplasty to open a blocked heart artery, along with physical therapy.

But the single mom might lose benefits again when her last child leaves home unless the state expands Medicaid. Right now the program covers single adults up to the federal poverty level, a little more than $12,000 a year.

As a professional gardener for private clients, Evanco’s income fluctuates, and there's a chance she could make too much to receive Medicaid.

"I’m terrified. Absolutely terrified," she said. "I can’t go without health care and I think most people shouldn’t have to."

During the gubernatorial campaign and after his election, Gov.-elect Democrat Tony Evers promised to do things differently. Republican Gov. Scott Walker had rejected federal money to expand Medicaid; Evers said he would take it.

"We can change how health care is delivered in Wisconsin by taking that (federal) Medicaid money. That’s absolutely important. And we’ll do that," Evers promised prior to winning the Democratic primary in an interview with Wisconsin Public Television’s "Here & Now."

That’s not the only change Evers, who will be sworn in next month, hopes to make. He wants to get Wisconsin out of a lawsuit approved by Walker that would end the Affordable Care Act and gut protections for pre-existing conditions.

Evers also recently indicated he could stop a Walker initiative to make the poor work for health care.

Arkansas is the only state that has implemented such work requirements. Thousands of people lost Medicaid coverage, prompting dozens of organizations, including the American Academy of Pediatrics, to write a letter urging U.S. Health and Human Services Secretary Alex Azar to halt federal waivers allowing work requirements in states like Arkansas.

"We further urge you to suspend the work requirements/community engagement waivers you have approved in Indiana, Wisconsin and New Hampshire, and to refrain from approving any similar Section 1115 Medicaid waiver proposals, including Kentucky, until the lessons from Arkansas are understood and actions are taken to minimize the harm to beneficiaries," they said in the Nov. 21 statement. 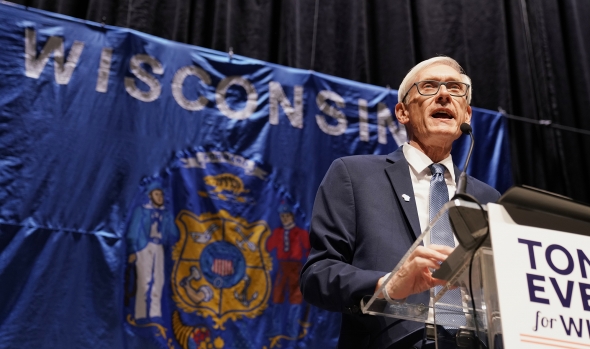 Between undoing Walker's legacy and pursuing his own agenda, Evers wants some big changes when it comes to health care in Wisconsin. Whether he can deliver remains to be seen.

"No, I don’t think things are clear cut," said Donna Friedsam, health policy programs director at UW Population Health Institute, about how many proposed changes will be implemented.

"I think, though, it was a consequential change with the new governor taking office. I think we’ll absolutely see certain changes being made or at least significant effort toward change being made," she predicted.

The question is whether that effort will matter.

Republicans still hold large majorities in both houses of the Legislature. Assembly Speaker Robin Vos, R-Rochester, has dug in against Medicaid expansion.

"Why would I want to put more folks on to BadgerCare knowing that would raise the private insurance rates?" Vos said during an interview on WISN-TV.

Evers might have more leeway when it comes to changing Walker's Medicaid work requirements.

"The new governor-elect, even with that approval from the Centers for Medicare & Medicaid Services, could decide not to implement that provision," said Robin Rudowitz, associate director for Medicaid and the uninsured at Kaiser Family Foundation.

But Evers could lose the power to make that change himself depending on what the Legislature passes in a lame duck session before Walker leaves office. Lawmakers could also block Evers' power to get out of the federal ACA lawsuit led by Schimel. Whether Wisconsin is in or out, other states will continue that fight against the ACA.

That's not to say the outcomes of these fights are set in stone.

For example, the Wisconsin Hospital Association has been strongly supportive of Walker's approach to funding BadgerCare in Wisconsin. But CEO Eric Borgerding has never closed the door to Medicaid expansion because of all the federal money it could bring to the state.

Preliminary estimates indicate the state would save $280 million if it accepted federal Medicaid money in the next budget.

Some remain hopeful that health changes will happen because many voters indicated that’s what they want.

Whatever lawmakers decide could affect people like Evanco. The heart attack victim is now fully recovered and working but she says she can’t afford health insurance after paying for rent, food and transportation.

"I’m hopeful that we’ll have some better things going on for Wisconsin in more situations than just health care with a different governor," she said.

But how much change there will be could depend on politicians who didn’t agree on much before the election and still don’t.