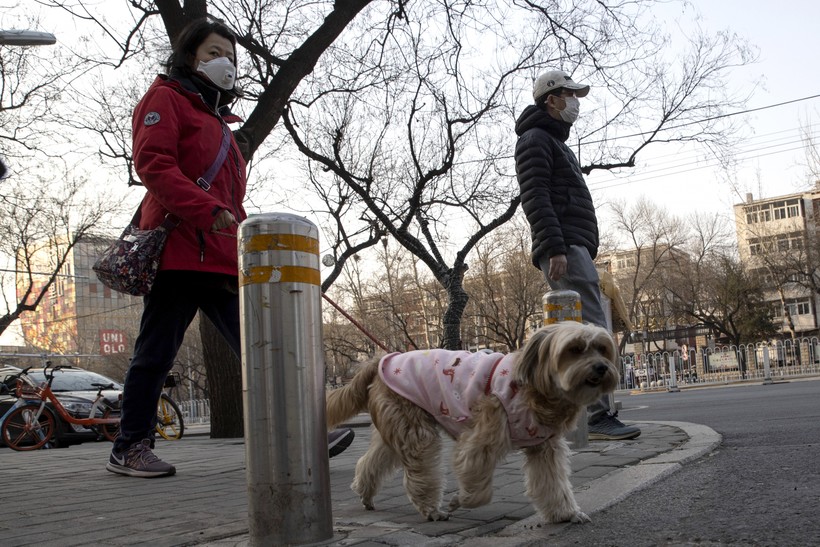 A resident wearing a mask walks her dog on the streets of Beijing on Thursday, March 5, 2020. Ng Han Guan/AP Photo

Can Pets Contract Or Transmit COVID-19? A Virologist Answers Your Household Pet Questions

Risk Is Low, But Little Data And Research At This Time
By Mary Kate McCoy
Share:

As COVID-19 continues to spread in Wisconsin, questions have surfaced on how household pets and livestock are affected by the virus, and what can be done to protect them.

WHYsconsin has received numerous questions from audience members about COVID-19 and we are working to answer them. Here are the answers to some of those questions you have submitted. WPR's Mary Kate McCoy spoke with Kristen Bernard, a virology professor at the University of Wisconsin-Madison, to answer some of your questions.

Kristen Bernard: As far as we know, the answer is not easily. There has been one single report in Hong Kong of a dog testing positive for the coronavirus-19. It was a very low positive and its owner had contracted COVID-19. So it's possible, but there's really very little data, and we don't think that it readily happens.

Q: What would the symptoms be like in a pet that had contracted COVID-19?

KB: We have not seen any type of respiratory disease in pets that’s unexplainable. If this readily happened, we would expect that there would be a number of cases especially where there was a lot of human disease. And we would expect to see some kind of respiratory signs in our pets (like coughing or nasal discharge), or maybe even diarrhea, because some coronaviruses can cause diarrhea in different species.

Q: Is there any evidence that the virus can be transmitted by pets and livestock?

KB: Most of the transmission we know is happening as human to human. If pets or livestock could become infected at a high level and really start to shed the virus, then that is a possibility. Again, we don't see any evidence for that, including not just in the United States, but anywhere in the world right now.

Sometimes we think of animals having the virus, say on their fur, could they then transmit it to humans just like we've been warning people about touching surfaces that might be contaminated? Really, that kind of transmission happens more when it's a hard surface, a non-porous surface, like a door knob, like a countertop or a sink, handles, things like that. So it's a very low probability of that happening.

Q: Evidence suggests COVID-19 came from an animal, can you talk more about that?

KB: Right, to the best of our knowledge. There will be ongoing studies I'm sure for years. We still don't know exactly which species, but all the evidence points to it coming from a wild animal. And most likely a wild animal in a live animal market in Wuhan, China. That's our best evidence so far.

And we don't know … if there's an animal species that is most highly suspected as being the original transmitter. Prior to that, it probably came from bats. And we know that due to the relationship of the virus to other coronaviruses that have come from bats. We think most likely it came from bats, went into another wild animal, which then was transmitted to people at a live animal market situation.

Q: How does it work for a virus to cross species?

KB: Every virus is a little bit different in how it does that. Some viruses are very strict in what animal species, including humans, it can infect. Others have a little more wiggle room. If it has the right opportunity it can get into another animal and then maybe adapt to that animal, and then vice versa it can change a little bit and get into humans. Then it might adapt to humans and be able to transmit between humans better.

So it depends on ... the parts of the cells that the virus requires, if there's enough similarity between an animal and a human — such that the virus can now replicate in humans. So it really depends on the virus. But we do see this. And we do sometimes see it going the other way, we see humans giving viruses to animals, which is potentially what we would be concerned with in the case of COVID-19 in our pets.

Q: What do pet owners need to know in terms of caring for their pets right now?

If you're not sick, I would not worry at all about taking care of your pets and just continue on as usual.

Maybe if you have somebody else that could take care of your pet for a little bit, that would be helpful, too. But some people don't have that choice.

Q: Has there been any testing on pets at this point?

KB: Really minimal. That's one reason why we're always cautious to say that it can't infect a dog or cat. There has been a test that's been put out by a commercial company that does testing for animals. And they've tested ... samples and haven't found any positives. But of course, we haven't had the virus here in the U.S. very long. So it's really still out there and right now the priority is in testing humans. So I don't think we'll have that definitive answer, but I'm sure it'll come at some point in the future.

This story came from an audience question as part of the WHYsconsin project. Submit your questions or concerns about COVID-19 here and we will do our best to answer it.