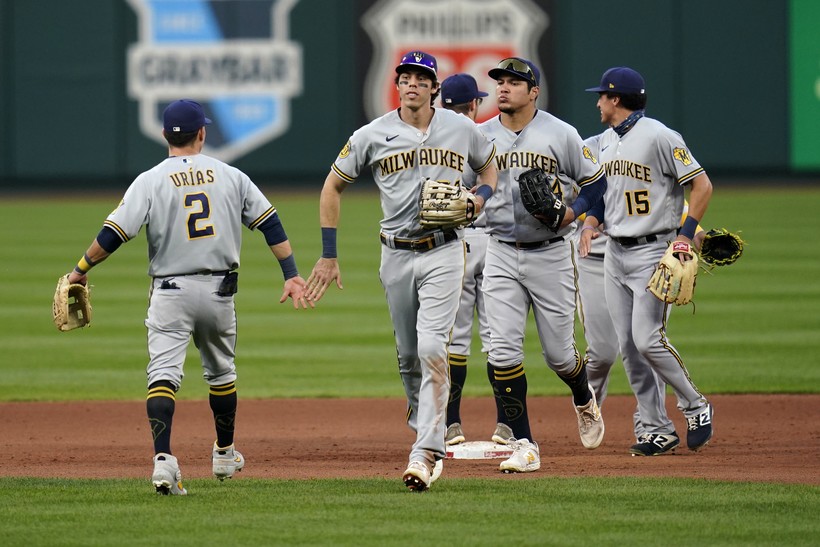 Members of the Milwaukee Brewers including Luis Urias (2) and Christian Yelich, second from left, celebrate a 3-0 victory over the St. Louis Cardinals in the first game of a baseball doubleheader Friday, Sept. 25, 2020, in St. Louis. Jeff Roberson/AP Photo

Can The Brewers Beat The Dodgers? Christian Yelich Thinks So

Milwaukee's Offense Needs To Turn Things Around If The Brewers Hope To Make A Playoff Run
By Megan Hart
Share:

It’s unusual for a team to celebrate after a loss, but that’s what the Milwaukee Brewers found themselves doing Sunday.

Despite dropping the final game of the regular season to the St. Louis Cardinals, the Brewers clinched the National League’s eighth and final playoff seed.

"It wasn’t pretty the whole way," outfielder Christian Yelich said. "We took a beating sometimes, had ups and downs, and we were able to find a way and sneak in."

It’s the first time in franchise history the Brewers have made the playoffs in three consecutive seasons. But the road ahead is daunting.

The Brewers flew to Los Angeles Sunday, where they’ll face the top-seeded Dodgers in a first-round, best-of-three series beginning Wednesday night. The Dodgers finished the regular season with the best record in baseball.

Beating L.A. will be tough, but any team can win two games, Yelich said.

Milwaukee never got over .500 this season, but Major League Baseball introduced an expanded playoff format that allowed the Brewers to eek in. This season, the Brewers and the Houston Astros became the first teams in MLB history to reach the postseason with a losing record.

He’s hoping to pay back the Dodgers for beating the Brewers in Game 7 of the 2018 National League Championship Series, he said.

Pitching has been Milwaukee’s strength this season, but against the Dodgers they’ll be without their ace — Cy Young contender Corbin Burnes left a game Friday with an abdominal injury.

"Obviously, losing Burnes is a huge blow, and he was a big reason why we’re here today," pitcher Brandon Woodruff said.

When asked if he’d be willing to start Wednesday on short rest, Woodruff said he’s "up for anything," though Brent Suter is most likely to take the mound. Suter has thrown over 31 innings for the Brewers this season with a 3.13 earned run average.

Last year, the Washington Nationals beat the Brewers in the NL Wild Card game before going on to win the World Series. The Nationals clicked at the right time, Woodruff said. He’s hoping Milwaukee can do the same thing this postseason.

If the Brewers hope to upset the Dodgers, their struggling offense will need to be firing on all cylinders. Los Angeles scored 349 runs this season, more than any other team. Meanwhile, Milwaukee ranked 26th in that category.

Right-hander Walker Buehler is expected to start for the Dodgers Wednesday. He pitched four scoreless innings last week against the Oakland A’s after missing time due to a blister. Three-time Cy Young winner Clayton Kershaw is likely to start Game 2.

Everyone in the organization — from the Brewers’ medical staff to the stadium operations crew who adapted Miller Park amid the coronavirus pandemic — played an important role this year, he added.

"This goes beyond the normal contributions from a number of segments of our organization. First just to allow us to have a season and to make our players comfortable, and second, to be able to scratch out enough wins to now be in the playoffs," he said. "Everyone is 0-0, and we’re going to go to L.A., and we’re going to give it our best shot."