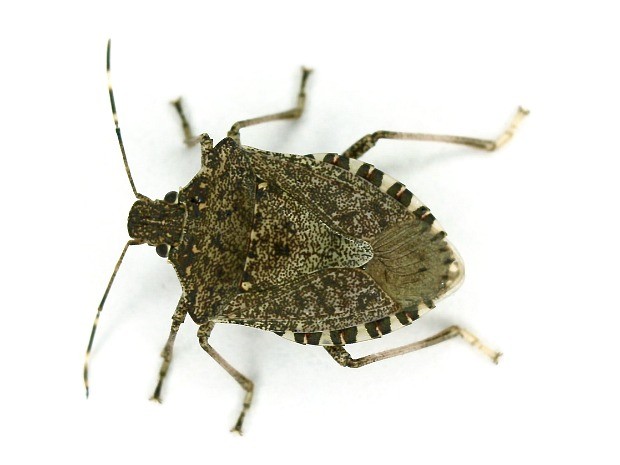 Biological controls for the brown marmorated stink bug in Wisconsin are not known.

Can Biological Control Take A Bite Out Of Brown Marmorated Stink Bug?

Nature is full of checks and balances. Of the roughly 1 million species of insects known to science, there's an amazing intricacy to the food web. In natural settings, insect pests like the brown marmorated stink bug and their diverse predators, parasites and pathogens (all describable as "natural enemies") adapt over time, establishing a general balance and coexistence. In most cases, these natural enemies engage in a lot of ongoing, behind-the-scenes interactions that help keep pest populations in check. When an invasive species becomes established, the idea of "classical" biological pest control is to investigate an invasive pest's native range to find any natural enemies that normally keep it in check. While biological control sounds great in textbooks, can it actually work out in the real world? The answer: It all depends on the situation.

To put this uncertainty into perspective, a few examples shed light on the history of biological control.

Shortly after the U.S. Civil War, an unusual insect known as the cottony cushion scale was accidentally introduced to California from Australia, resulting in significant damage to the citrus industry. Damage by this invasive pest was so bad that in some cases growers cut down citrus trees and burned them in an attempt to stop the insect. Luckily, an observant entomologist noticed that an Australian lady beetle known as the vedalia beetle loved to feed on the cottony cushion scale. By the late 1800s the vedalia beetle had been imported to the United States and quickly turned the tide against the destructive cottony cushion scale.

However, biological control isn't always so effective or prompt. In some cases years, if not decades can pass, before any results are noticed.

Consider the example of the gypsy moth. The fungus Entomophaga maimaiga is a disease affecting the gypsy moth in Asia. Scientists realized this fungus may help control gypsy moth outbreaks in the U.S. and introduced it to New England in the early 1900s. Fingers were crossed and the scientists waited for the results to come in. Much to their dismay, the expected results didn't materialize and the research program was abandoned. Nearly 80 years later, everyone was surprised when the fungus popped up and killed large numbers of gypsy moth caterpillars. Sometimes it simply takes time for things to click and for a new balance to be achieved.

With the brown marmorated stink bug emerging in earnest in Wisconsin, could biological control be a solution? Early studies have offered a grim outlook and suggested that North American natural enemies are not capable of controlling these stink bugs. However, more recent research has found that some native natural enemies, such as katydids, crickets and ground beetles, can readily consume the eggs of the brown marmorated stink bug. Therefore, these species may be having a larger impact on the invasive stink bug than originally thought.

Other species are being studied. The U.S. Department of Agriculture is screening miniature, stingless, egg-parasitizing wasps for their biological control potential. Ironically, while this process has been in the works, one of the candidate parasitic wasp species (Trissolcus japonicus) has made its way to the U.S.

The source of these wasps is unknown, and it's presumed that their introduction was accidental. Will our native natural enemies and/or these parasitic wasps ultimately be able to keep the brown marmorated stink bug in check? It's certainly a possibility, although only time will tell for sure. In the meantime, brace yourself for "the bug."