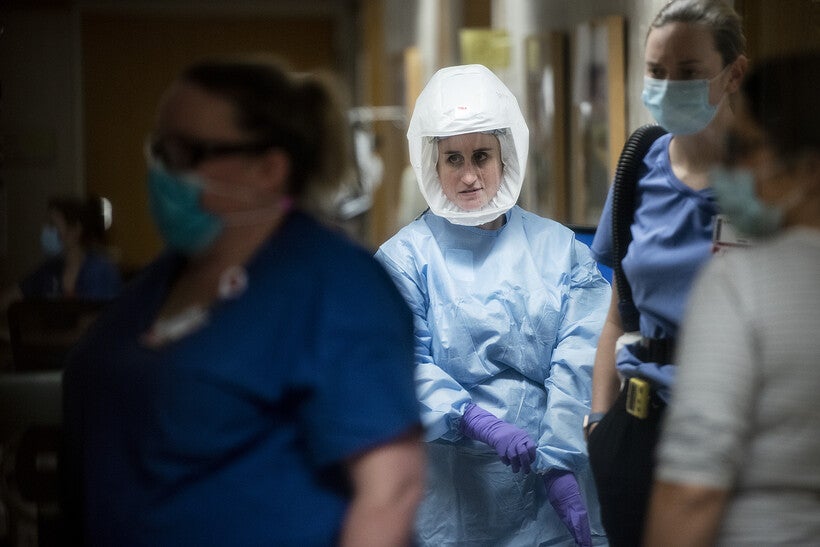 Nurses and doctors at UW Hospital walk through a hallway Tuesday, Nov. 17, 2020, in one of the hospital’s COVID-19 units, where patients are treated for the disease. Angela Major/WPR

Business and health groups were largely at odds Tuesday as the state Assembly’s health committee heard public testimony about a brand-new, GOP-backed proposal to respond to COVID-19 in Wisconsin.

Republicans are lauding the wide-ranging bill, which includes more than 44 provisions, as a long-awaited response to the virus’ social and economic effects across the state, while Democrats point out it includes numerous provisions Gov. Tony Evers has called "poison pills." Those provisions include stricter requirements on schools that want to provide virtual instruction and limits on local health officials’ power. The bill would also provide legal immunity for businesses that don’t follow local, state or federal requirements aimed at curbing the spread of coronavirus.

During testimony, Assembly Speaker Robin Vos, R-Rochester, who is sponsoring the plan, said it would provide "much-needed relief to the citizens of our state."

"COVID-19 has affected every citizen of our state — from the loved ones who have become ill to the hospital staff working long hours with overflowing beds, the parents who have become teachers and businesses who are struggling," Vos said.

However, several health organizations have registered their opposition to the proposal, including the Wisconsin Public Health Association, Wisconsin Association of Local Health Departments and Boards, and SEIU Healthcare Wisconsin, the state’s largest health care workers union.

Julie Zugenbuehler, who worked as a nurse in Madison for decades, wasn’t able to testify at the hearing in person, but provided written testimony raising concerns about the bill. She argued it doesn't include much-needed protections for health care workers who are on the front lines of fighting the virus — protections like workers compensation and hazard pay.

"Since the start of the pandemic, employers and lawmakers alike called essential workers heroes, but we have yet to see action taken to back up those words," Zugenhuehler said. "This bill does nothing to address the needs of front line healthcare workers to ensure that we have what we need to make it safely through this crisis."

Zugenhuehler was diagnosed with COVID-19 over the summer and has since been unable to return to work because she was out sick for too long and they filled her position, she said.

In its testimony, the Wisconsin Public Health Association argued the bill, "unnecessarily (makes) it more difficult for local health departments to effectively manage their statutory responsibility to prevent and suppress disease during this pandemic."

The bill limits local health officers’ ability to restrict capacity of businesses during the pandemic to 14-day periods, unless the officer's local government approves an extension of such an order. Each extension could only last 14 days.

Business groups largely testified in support of the bill, including the Wisconsin Restaurant Association and Wisconsin Manufacturers and Commerce (WMC), the state’s largest business group.

Cory Fish, general counsel at WMC, said the group firmly supports the liability protections for businesses. He argued people are filing "frivolous" lawsuits after contracting COVID-19, attempting to get money from businesses as cases settle out of court.

"These lawsuits are filed knowing that you’re never going to be able to actually prove that (a business) spread COVID," Fish said.

He said businesses are settling the lawsuits to avoid economic and emotional strain, as well as bad publicity.

The proposal puts Evers in a difficult position.

Evers has the power to veto the bill, but in doing so he would nix a number of measures in the plan he and Democrats agree with, like extending the temporary suspension of the state’s one-week waiting period for unemployment benefits.

In Wisconsin, the governor only has partial veto power for appropriations bills, which this plan is not. So Evers would either have to sign the entire measure or veto it in its entirety.

Other elements of the bill Evers and Democrats support include requirements that insurers cover COVID-19 testing costs, and that state health plans for low-income individuals and seniors cover vaccine costs. They also support an included extension of operating hours for the state unemployment insurance call center.

During a Tuesday afternoon call with reporters, Evers said lawmakers should have embraced his COVID-19 proposal, released last month, which he says includes measures agreed upon during meetings with GOP leaders.

"We had a bill that had 20 to 25 major points that the Republican leadership had agreed to," Evers said. "And instead, they have decided that that bipartisan effort was not to their liking, which is an odd position to take."

Evers said he has not reviewed the GOP proposal closely enough to decide about a veto.

"But if it involves some of the (proposals) that I absolutely couldn't agree to, the likelihood of a veto is probably pretty strong," he said.

The bill was approved by the committee Tuesday afternoon, with Republican members voting in favor and Democrats against. It is expected to go before the full Assembly later this week.

A spokesperson for Senate Majority Leader Devin LeMahieu, R-Oostburg, didn’t respond to a request for comment about the bill’s prospects in the Senate. However, Vos said Monday the plan was drafted in consultation with the GOP senators.

Assembly Republicans released the bill Monday, on the first day of the new legislative session. It followed months of disagreements between Evers and the GOP-controlled Legislature over how state government should respond to the pandemic, with the governor calling on legislators to do more to support people and businesses in the second half of 2020.

Prior to the new bill’s introduction, lawmakers last met in April to pass the state’s first COVID-19 response bill.