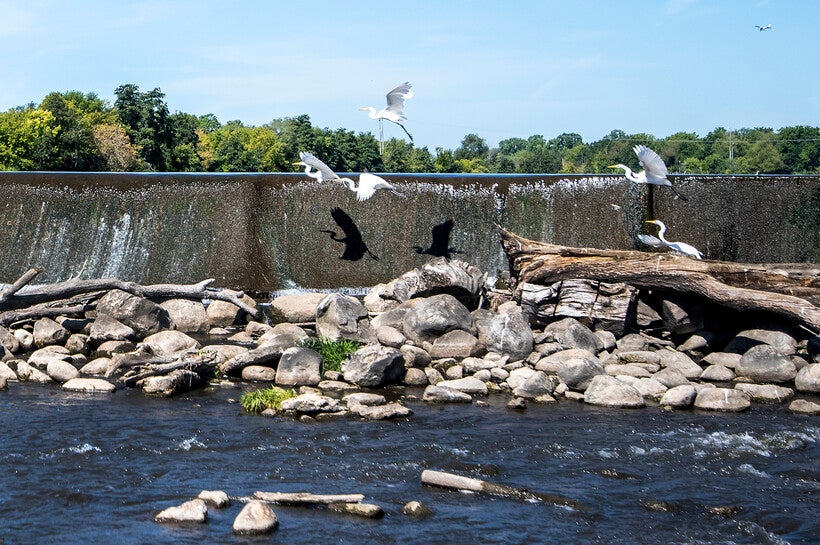 Burlington’s Echo Lake Dam must be removed or modified. Voters will decide themselves what they want this November.

Echo Lake is a centerpiece of Downtown Burlington. It’s a short walk from Adrian's Frozen Custard. Fans watching baseball games at Burlington’s Beaumont Field can see the lake from the stands. A park and playground sit next to it, including the Veterans Terrace at Echo Park.

The Echo Lake Dam was constructed in 1835 to generate power for flour and saw mills. Now, nearly 200 years later, an advisory referendum could help decide the fate of the dam and the lake it created after the Wisconsin Department of Natural Resources said the current state of the dam isn’t safe. The lake doesn't only draw visitors and residents, it is also a place to see wildlife, like egrets and ducks. You might even see an eagle there, according to Yvette Moeller, who wants to save the dam and lake.

Moeller, like many Burlington residents, has a personal connection to the area — her son was married at the Veterans Terrace, an events venue adjacent to the dam.

"Echo Lake is the people's lake, it's a place where people of every walk of life come to enjoy," Moeller said.

But some residents would rather remove the dam and restore the nearby White River.

"I think there’s all sorts of ways for Burlington to turn that area into an iconic area for Burlington. They (city leaders) have to get down and discuss it and all get on the same page," said Cody King, who wants the dam to be removed.

On Nov. 8, voters in Burlington will decide themselves. 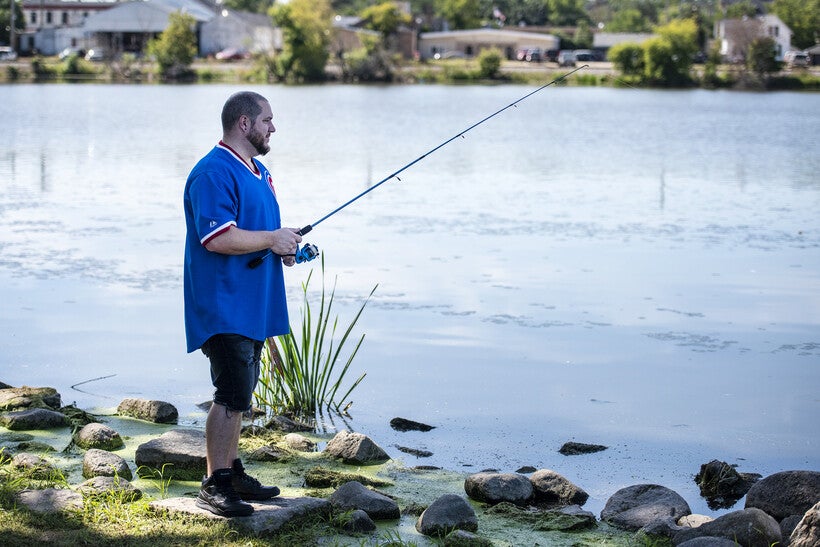 The dam is on the White River, just north of the confluence with the Fox River. The impounded waters create Echo Lake, which is now 70 acres. The dam has not served the city as a source of power since 1933.

All dams across the state are inspected by the Wisconsin Department of Natural Resources. The DNR estimates there's 3,900 dams in Wisconsin. About 17 percent of those are owned by a municipality. Faced with their own deteriorating dams, Janesville and West Bend opted to remove the structures and restore the rivers running through their communities in recent years.

In 2013, Burlington performed a dam failure analysis. The results found the spillway wasn’t able to contain a 500-year flood, as required by the DNR.

"What that means is during a catastrophic flood, our dam is not able to keep the waters within its bounds and water circumvents the dam, coming around the edges and that’s where bad things happen and where dam failure can occur," said Peter Riggs, the Burlington director of public works.

That’s what the city and the DNR are trying to prevent.

The city is required to fix the problem by 2025. Two options were quickly identified, the first being to repair and modify the dam.

"Or an easy way to be compliant to dam rules, is to not have a dam," Riggs said. 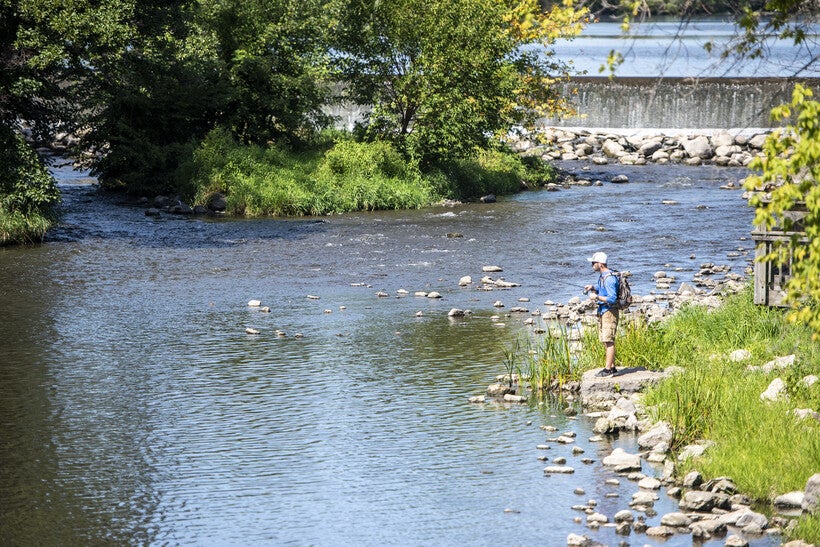 A fisherman casts a line near the Echo Lake Dam on Thursday, Sept. 1, 2022, in Burlington, Wis. Angela Major/WPR

To modify the dam, the floodgate would be removed and three new gates would be installed. The concrete retaining wall downstream from the dam would also be reconstructed. Echo Lake would be dredged, the shoreline would be stabilized and improvements would be made to a nearby city park.

If the city removed the dam, it would also restore and reshape the river as well as restore the drained lakebed to a mixture of lawn, natural areas and wetlands, according to a city document.

This past summer, a citizen steering committee came up with cost estimates and plans for each option. After those options were presented to the common council, the council decided to get input from the community through an advisory referendum.

Removing the dam would cost $7.7 million, while repairing it would cost $8.1 million. The city also received a $1 million grant from the DNR for the project. There could be other grant opportunities depending on the selected project.

Signs that read "Save our Echo Lake and Dam" can be seen throughout the city and surrounding area.

Moeller helped start the Facebook group "Friends of Echo Lake and Dam," which has over 900 members.

"I don't want to lose Echo Lake. It's part of our heritage. It's our gateway into the city of Burlington Historic District. It's been here since 1835," Moeller said. 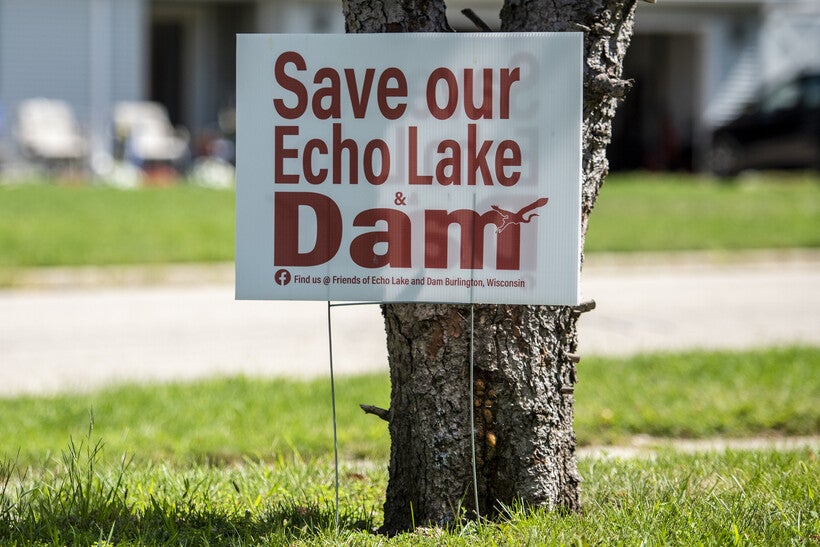 A sign is on display in a front yard Thursday, Sept. 1, 2022, in Burlington, Wis. Angela Major/WPR

Moeller is worried taking away the dam will disrupt wild birds that flock to the area. She also pointed out that many visitors come to see the lake, and she's concerned taking it away would destroy the look and feel of the community.

"When you drive into Burlington and you're coming in, (the dam is) kind of like your home," Moeller said. "It's like your friendly reminder that you're back in your home. It's peaceful, it's tranquil."

The group is also calling for the lake to be dredged as part of the plan.

A city survey found that 60 percent of residents supported repairing the dam. Moeller is hopeful that sentiment will be reflected in the results of the referendum.

"If the people vote that they want to keep the lake and dam, it would really be foolish for them (city officials) not to follow what the people want, right?" Moeller said. "But on the same respect, that's a double-edged sword, because what if it goes the other way?"

Cody King has lived in Burlington his entire life. The 34-year-old lives about a mile from the dam.

Standing in front of a sign that reads "Remove the Dam, Restore the River," he said the debate around the issue has caused a bit of turmoil for the community. He also believes he might be in the minority. 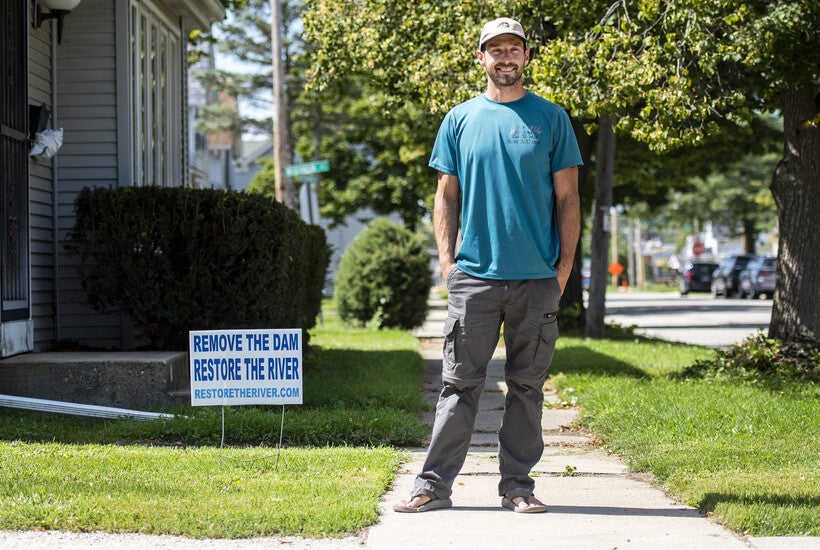 "People look at me kind of funny," King said.

The webpage for the Remove the Dam group says, "The lake is no longer a thing of beauty nor offers much recreation outside of ice skating. A restored river could allow for more recreation options, including better fishing."

King said he understands Echo Lake's sentimental value, but he also has faith in the DNR if the city decides to remove the dam. Over 150 dams have been removed from Wisconsin streams since 1960, according to the DNR.

"There’s just a lot of stuff they can do there… It’s a big chunk of property," King said, adding that apartments could even go there, or a new firehouse.