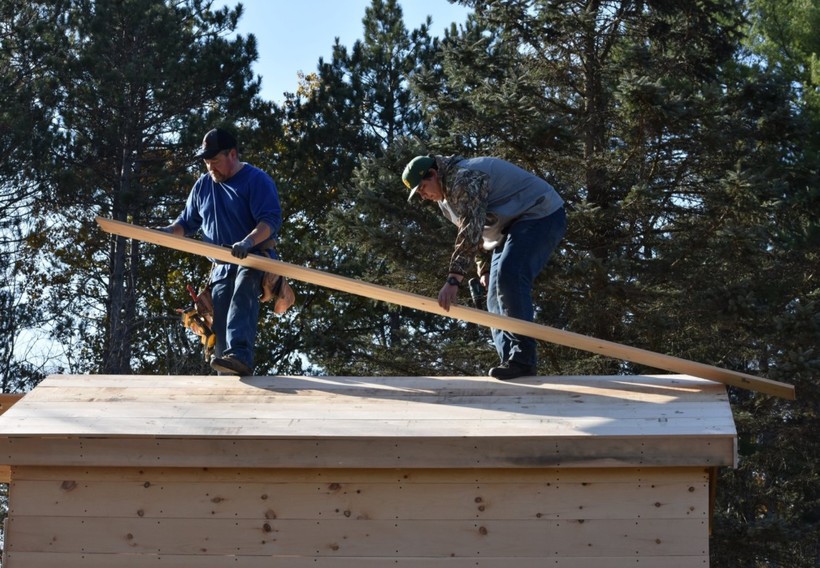 Construction of the tiny house was completed this summer, and the first resident moved in shortly after. The Community Rebuilders organization recently received a grant to build two more tiny homes. Photo courtesy of Menīkānaehkem - Community Rebuilders

Building On A Dream: Menominee Nation Builds Tiny Homes For Its Members

Project Is One Of Several Initiatives Started By Grassroots Organization Working To Revitalize Its Community
By Elizabeth Dohms-Harter
Share:

Long ago, in the Menominee Nation, there were the dreamers — "the ones who can see it coming." If something in life was confusing or required an answer, the Menominee could ask those members of their Nation for help and clarity. People would bring tobacco and return in a few days for answers to their questions.

But somewhere along the way, the Nation lost the ability to dream — or maybe it was taken from them, said Guy Reiter. Reiter, who also goes by the name Anahkwet, is the executive director of Menīkānaehkem — Community Rebuilders, a grassroots organization focused on revitalizing the Nation's communities.

In hopes of spurring on ideas for ways to help the community, Reiter called on Menominee volunteers to join him in dreaming up ideas for revitalization. About 30 people came together on the Menominee reservation in Keshena, in northeast Wisconsin, outside in front of a whiteboard. That was about a decade ago.

From those dreams sprung the idea of tiny homes — the first of which was built this summer on the Menominee reservation. These homes are safe places for people to live during transitional periods in their lives, where they can rest, heal and find community support.

There are five employees and about 40 volunteers who comprise Menīkānaehkem — Community Rebuilders. Its Tiny Homes for Healing initiative is one of several that have been taken on by the group, along with efforts to protect the Menominee River, and promote food sovereignty and energy sovereignty.

The group built the first tiny home in about two weeks this summer, and housed its first resident starting about a month ago, Reiter said. Residents will be allowed to stay in the homes for about 90 days, but Reiter said that timeline is flexible, depending on the needs of the person living there.

Residents who move into the tiny homes are helped through their transition period by a mix of Menominee residents that comprise what Reiter called a support circle. That group might include community members, family and members of Menīkānaehkem. 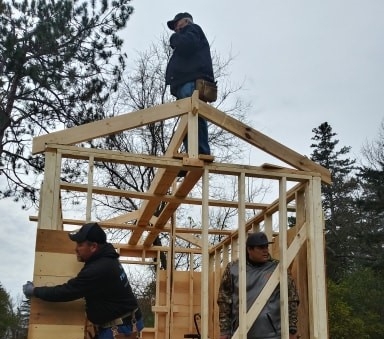 Kristin Welch, who is lead organizer for the Women's Leadership Cohort for Murdered and Missing Indigenous Women — another of the Community Rebuilders' initiatives — said that there's not much of a restriction on who stays in the tiny homes, just that they need to be looking toward a place of healing or recovery.

"That can be anyone from our domestic violence and sexual assault survivors to those transitioning out of detention," she said. "A lot of people need emergency housing, especially with COVID, and we do have a lot of young people that transition from home to home in need of space, too."

Reiter said while there's no specific goal in mind for the number of tiny homes, a greater objective is to build as many homes as possible on 80 acres on the reservation.

The first home was built with dollars raised through fundraising, and Reiter said the organization recently received a grant to build two more tiny homes. Anyone interested in donating can reach out to Anahkwet or visit Menīkānaehkem's website.

Reiter said Menīkānaehkem wants to change the narrative that has been forced on members of the Menominee, something that causes harm and damage to people who believe that the narrative is true.

"There's no way that a group of people could have went through what we went through and be looked at as weak, as lazy, as not resilient," Reiter said.

Welch said the tiny homes project is an example of resiliency among generations of Menominee, and speaks to the kind of strength that's setting the foundation for how the Nation moves forward.

"So, it's bringing those strengths back and bringing them to this present time," she said.

Reiter explained that the builders of the tiny homes employ the same care and attention that goes into the revered teaching lodge, a community gathering space. Instructions for how the lodge is built have been passed down orally through the generations.

The teaching lodge is a rectangular-shaped building that from start to finish, requires a level of mindfulness from its builders. Anyone working on the building should have good feelings, and anyone with angry or resentful feelings is expected to step away. Before harvesting wood for the lodge, its builders offer tobacco and prayers to the spirits.

"That's the care in which we're going about (the tiny homes) building and constructing," he said.