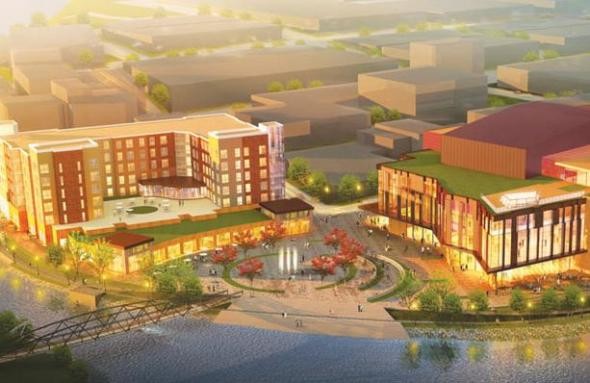 An artist's rendering of the Confluence Project.

Walker Budget Had Set Aside $15M For Confluence Project
By Rich Kremer
Share:

A proposed performing arts center in Eau Claire will not get any state funding after the Legislature's budget committee pulled $15 million out of Gov. Scott Walker's state budget.

During a campaign stop last summer, Walker vowed to set aside $15 million in his budget for a proposed performing arts center in Eau Claire called the Confluence Project. But with revenue projections looking poor, the state’s Joint Finance Committee quickly pulled the earmark.

"It’s like a really bad game show where you can’t win," he said. "You do everything that’s expected to be done, you get all sorts of bipartisan support for a project. Yet of the 16 of us (on the committee), 12 of us have said, 'No, just go to the back of the line,'" said Erpenbach.

The JFC ordered the Department of Administration to work with Confluence developers on a new funding plan by 2017.