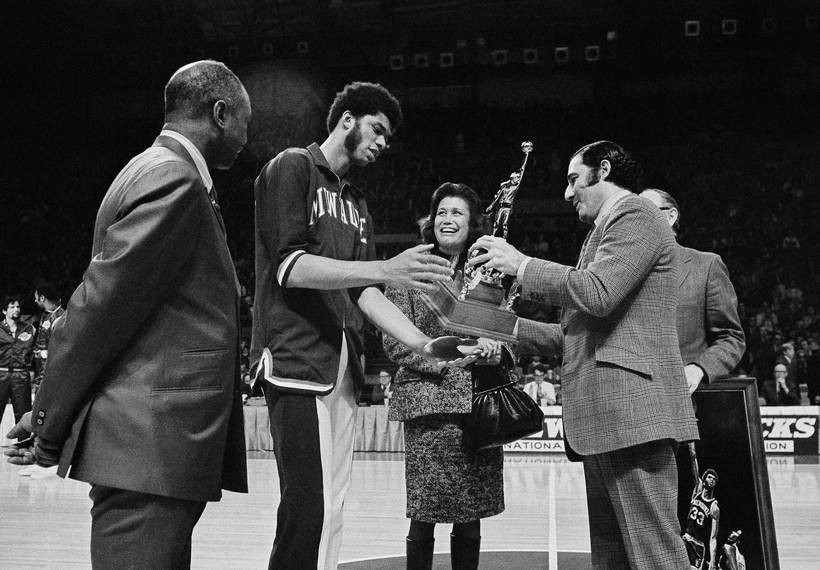 As Bucks Aims To Even Series, A Look Back At The Coin Flip That Shaped Their Past

Sports historian Rick Schabowski has been to big games before.

He watched the Milwaukee Bucks play in the NBA Finals in the 1970s. He has attended World Series games and Final Fours. Still, the scene was unbelievable Sunday as he walked through the Deer District and into Fiserv Forum, he said.

"And inside it was even more amazing. My hearing aids, I didn't need them. It was deafening in there. It was really something," he said.

The Milwaukee Bucks beat the Phoenix Suns in Game 3 of the NBA Finals on Sunday.

Schabowski has literally written the book on the Bucks. His book, "From Coin Toss to Championship: 1971 - The Year of the Milwaukee Bucks," examines that pivotal time in the team's early history.

The fact that the these two teams are now facing off for basketball’s biggest prize is an echo from the past. This isn't the first time their stories have overlapped in important ways.

The Bucks and the Suns both entered the NBA in 1968 — growing the league from 12 to 14 teams. In Milwaukee, there was a contest to name the franchise, Schabowski said. Someone from Whitefish Bay submitted the winning suggestion.

Today, basketball uses a lottery system to determine the first four teams to pick in the NBA Draft. Back then, it came down to a coin toss that would have a major impact on the Bucks' future. 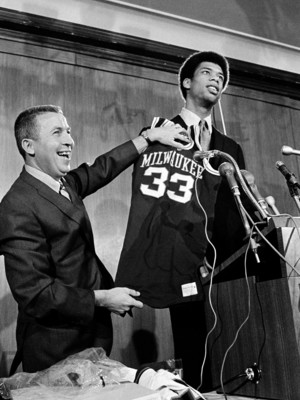 General Manager John Erickson of the Milwaukee Bucks holds up a No. 33 team jersey against newly-acquired player Lew Alcindor, who changed his name to Kareem Abdul-Jabbar, during a news conference in Milwaukee, Wis., Monday, April 15, 1969. Abdul-Jabbar was the club's first choice in the NBA draft and held a news conference during his first visit to Milwaukee. AP Photo

The flip would decide which team — the Bucks or the Suns — would get the top pick in 1969. The stakes were high: Arguably the greatest college basketball player ever was on the board.

"I remember being a junior in high school, at Pulaski High School, and I had my headphones hidden in my ear during geometry class listening to the coin flip," Schabowski said.

The Suns polled their fans who voted to call heads.

"In my book, there's a picture of one of the original owners of the Bucks, Wes Pavalon, who was very, very excited," Schabowski said. "He was on the phone, listening to the flip. It was funny, he said, 'I always like the other guy to make the mistake,' and that's basically what happened."

The coin showed tails, and Milwaukee selected Kareem Abdul-Jabbar. But it wasn't a done deal. The ABA's New York Nets were also in the running to sign him, Schabowski said. The Bucks made a better offer.

Despite later requesting a trade, Abdul-Jabbar left his mark on Milwaukee, Schabowski said. He's not sure if the Bucks would have won a championship in 1971 without him, despite other talented players on the roster.

"For those five years, he played hard," Schabowski said. "He was determined. He played his heart out for this town and hats off, we have that NBA title."

No expansion team in the history of American professional sports had ever won a title more quickly, and the Bucks haven't won one since.

Meanwhile, the Phoenix Suns are vying for their first championship.