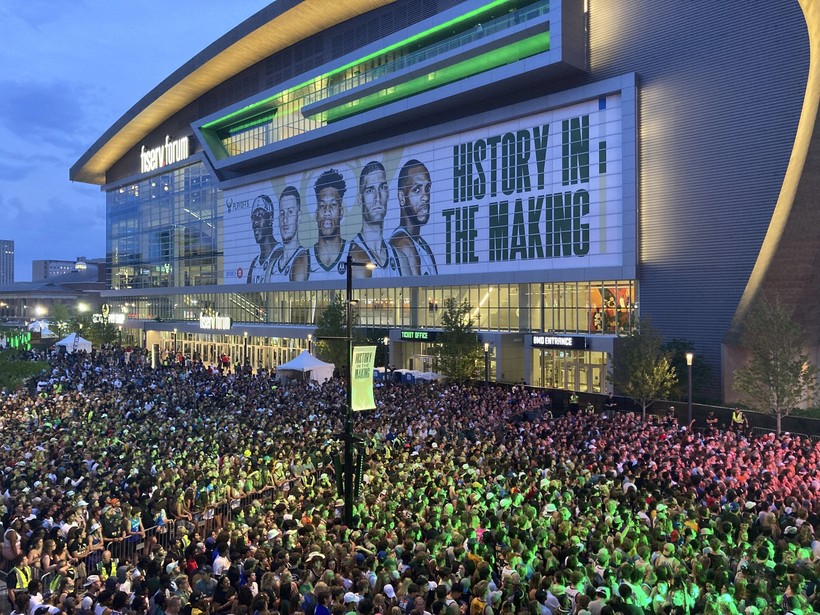 Thousands of fans gather outside Fiserv Forum to watch on a video screen as the Milwaukee Bucks play at Phoenix in Game 1 of the NBA Finals on Tuesday, July 6, 2021, in Milwaukee. Bucks officials said 9,000 fans watched the game on a video screen inside Fiserv Forum and another 20,000 watched in the “Deer District” outside the arena. The Bucks are in the finals for the first time since 1974 as they chase their first championship since 1971. Steve Megargee/AP Photo

Already in these playoffs, the Milwaukee Bucks have come back from 0-2 to win a series. They’re a step closer to accomplishing the feat again after beating the Phoenix Suns in Game 3 of the NBA Finals on Sunday, 120-100.

The Bucks have lost just once at Fiserv Forum these playoffs, while the Suns had dropped just two road games before Sunday.

The teams were evenly matched in the first quarter. Deandre Ayton opened the scoring for Phoenix, finishing the quarter with 12 points, including a couple of jumpers for the 6-foot-11 big man. Meanwhile, Giannis Antetokounmpo recorded five rebounds and four assists for Milwaukee. Head coach Mike Budenholzer said Antetokounmpo did a little bit of everything on Sunday.

"He’s just doing whatever it takes to help his team, to help us. He’s in an aggressive mindset. He always plays that way," he said.

The Bucks moved the ball well in Game 3, finishing the contest with 28 team assists. But after 12 minutes, the Suns had a tight 3-point lead.

It was the second quarter when the Bucks got into trouble in Game 2, with the Suns eventually winning, 118-108, after pulling away before halftime.

Phoenix aimed to replicate that success in Game 3 — going on an 8-0 run to put the Suns up by 6 points, before Milwaukee took a timeout. Brook Lopez ended their streak with a dunk, and then his team went on a run of its own. 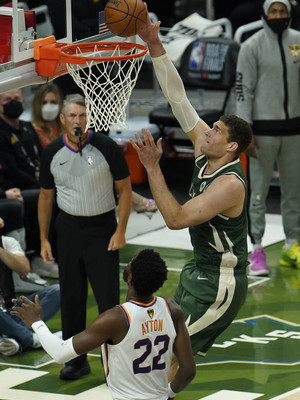 The Bucks dominated in the paint, and just a few minutes later, they had their own 6-point lead, fueled by a 20-6 run. The Bucks finished the first half up 60-45, thanks to a couple of corner 3-pointers from fan favorites Bobby Portis and P.J. Tucker.

Khris Middleton capped off the half with a couple of made free throws after drawing a foul on Ayton — his third of the game. Middleton went into halftime with a quiet 15 points — a big improvement from the 11 he scored in Game 2.

Ayton had another foul against Antetokounmpo early in the second half, and he came out of the game. Meanwhile, Antetokounmpo shot relatively well from behind the line, finishing the game making 13 of 17 free throws.

The Suns pulled within 4 points in the third quarter, with the help of Jae Crowder, who made six 3-pointers and finished the game with 18 points for Phoenix. The veteran player was on the Miami Heat team that bounced the Bucks from last year’s NBA bubble. Crowder has a history in Milwaukee having played at Marquette.

But the Bucks never let them get too close, and Milwaukee finished the third quarter with a 98-67 lead, thanks to 16 consecutive points. Bucks fans enjoyed the final quarter without much stress. 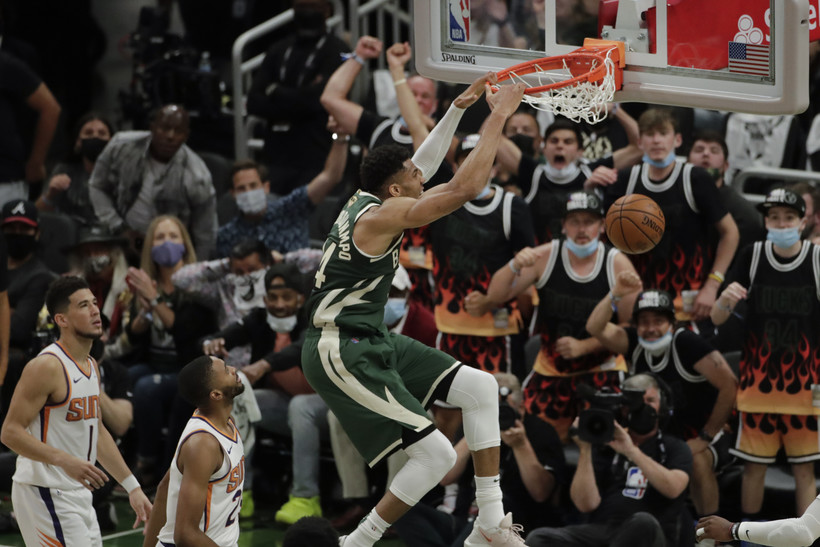 Milwaukee Bucks' Giannis Antetokounmpo (34) dunks during the first half of Game 3 of basketball's NBA Finals against the Phoenix Suns, Sunday, July 11, 2021, in Milwaukee. Aaron Gash/AP Photo

The Suns didn’t get enough help Sunday from star Devin Booker, who finished the game with just 10 points, after making seven 3-pointers in Game 2. He only played 29 minutes after struggling in Game 3. But Budenholzer said he doesn't think Booker will stay down for long.

Antetokounmpo led scoring for Milwaukee, with 41 points. It was his second consecutive 40-point game and only his third game back from a knee injury suffered in the Eastern Conference finals.

Jrue Holiday made big shots at key moments for the Bucks. He finished with 21 points.

Sunday marked the first time Milwaukee has hosted an NBA Finals game in almost 50 years. About 18,000 fans watched from inside Fiserv forum, with thousands more gathered outside. Fireworks exploded in the Deer District after the game.

Game 4 is set for Wednesday in Milwaukee. Tickets are available starting at $395.