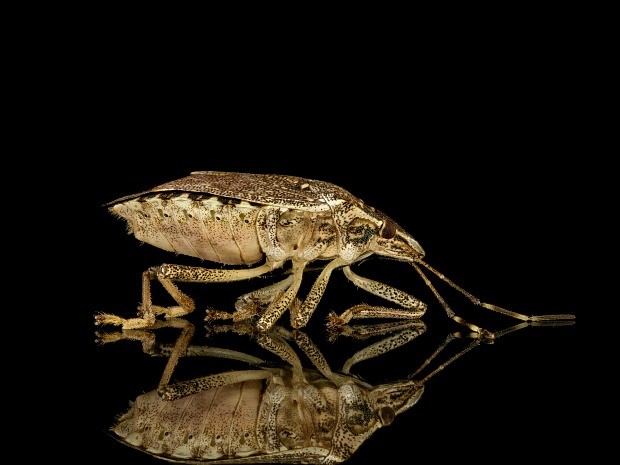 Invasive Insect Feeds On Dozens Of Crops, Other Plants
By Karen Faster and Scott Gordon
Share:

A smelly and increasingly infamous agricultural pest that is expanding through the U.S., the brown marmorated stink bug is native to East Asia, where it challenges farmers throughout the region.

The insect's scientific name is Halyomorpha halys, and it's part of the Pentatomidae family of terrestrial insects, which includes multiple species known colloquially as stink bugs and shield bugs.

Similar in shape and size to its relatives, the brown marmorated stink bug has a shield-shaped body that is a half-inch to five-eighths of an inch long. The color of its body is a marbled pattern of multiple shades of brown, with dark and light bands on its antennae, as described in a University of Wisconsin-Extension guide. This bug also has red eyes, and light and dark brown spots on the abdomen where it extends beyond the wings.

The bug lays its barrel-shaped, light green to yellow eggs in clusters of 20 to 30 on the undersides of leaves. After hatching, the immature nymphs range from the size of a pinhead to half an inch long. These young bugs vary in color, changing from yellowish-red to creamy white with reddish spots just prior to turning into adults. The bugs live six months to a year, and adults overwinter in protected sites and become active during the first warm spring days. The brown marmorated stink bug can emit a vile odor through two holes in its abdomen. This defense mechanism can prevent the bug from being eaten by its natural predators, which include birds and lizards. Adults store the chemical in a gland on their thorax and release it through one or both openings. Nymphs have glands on the tops of their abdomens that their wings cover.

"Odor isn't a foolproof deterrent; most birds have no sense of smell and happily chow down on them," wrote Kate Redmond, an environmental educator with the UW-Milwaukee. When humans move, scare or hurt the bug, it may emit a horrible odor that lasts a long time and makes a room intolerable until it is aired out.

The brown marmorated stink bug doesn't pose a health hazard to humans, but it is a nuisance. The bug's eclectic appetite makes it especially worrisome as an agricultural pest.

In China, the bug eats eucommia, a small tree that is grown for traditional medicine and is considered threatened in the wild. The insect also eats fruit and ornamental trees. The bug appeared in northern Japan in the 1990s and was a significant pest by 2011, consuming soybeans and fruit crops. Its menu in Korea, meanwhile includes soybeans, sweet persimmons, yuzu and citrus.

Overall, the brown marmorated stink bug feeds on more than 150 types of plants, including more than 30 agricultural crops.