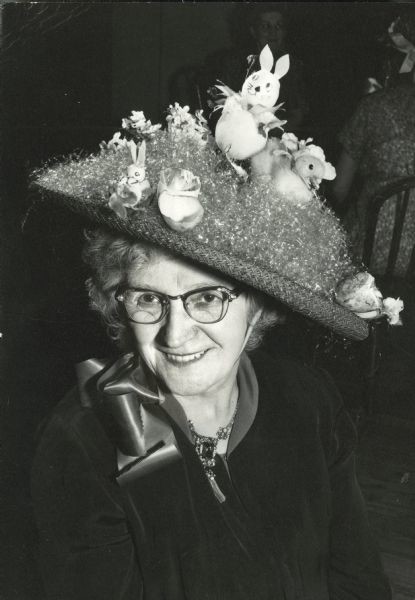 A Brief History Of The Easter Bonnet In Wisconsin

Composer Irving Berlin brought the Easter bonnet into popular culture with his 1933 song "Easter Parade." The song is about the New York City elites who attended Easter services at churches on Fifth Avenue and then strolled down the block showing off their new spring outfits. The popularity of the Easter bonnet hit its peak in 1948 when Judy Garland serenaded Fred Astaire on screen in a film with the same name as Berlin's tune.

In your Easter bonnet
with all the frills upon it,
You'll be the grandest lady in the Easter parade
- Irving Berlin, "Easter Parade"

But the idea of new clothes for Easter and for spring dates at least back to Shakespeare. In Romeo and Juliet, Mercutio rebukes Benvolio for his short temper by pointing out how Benvolio will even pick a fight with his tailor for wearing a "new doublet" before Easter.

Americans became more interested in a special Easter outfit in the late 19th and early 20th centuries. Women decorated their hats with the flowers that were newly blooming. Those in colder climates or without access to fresh flowers made paper or fabric flowers.

Easter bonnets don't have to be, strictly speaking, bonnets. Bonnets were the most common type of head covering for a 19th century woman when the Easter hat became popular so the word, if the not the style, stuck.

Ephraim settler Anna Petterson wrote to her mother back in Norway in 1888 that her sister-in-law was making herself a new Easter dress. "That may be her wedding dress, too," wrote Petterson. She also thanked her mother for the new shoes for her children, sent just in time for Easter.

For some, it seemed the Easter bonnet was an excuse to throw off the yoke of winter. The Wisconsin State Journal noted in 1960 that women "dash out and buy the most fetching, beflowered, and un-winterish hat they can put their hands on." Some of the best were featured in the newspaper modeled by students at the University of Wisconsin-Madison.

By the mid-20th century, many Easter bonnet wearers went for quirky rather than strictly flowery, as the woman in the above image illustrates. These hats are often featured in Easter parades around Wisconsin, including in Madison with its annual Easter Hat Parade.