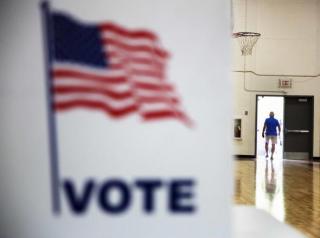 Judge Brian Hagedorn declared victory Wednesday in the tight race for Wisconsin Supreme Court, but talk of a recount is still looming.

Hagedorn, who serves on the state Appeals Court, would replace longtime Justice Shirley Abrahamson. Current vote counts have Hagedorn defeating fellow Appeals Court Judge Lisa Neubauer by 5,962, or about half a percent. That’s within recount range, but Neubauer will likely have to pay for it if she wants it.

"We made history in a significant way and our margin of victory looks to be insurmountable," Hagedorn said. "For me, this is a win not just for me, but a win for the state of Wisconsin. I ran this race saying my commitment is to the rule of law. The job of the judge is to say what the law is and not what I think the law should be. I think that won last night."

The statewide race was officially non-partisan, but Hagedorn was backed by Republicans. Neubauer was favored by Democrats.

Should his victory survive a recount, Hagedorn's win would be a boon for conservatives. They first captured a majority on the Wisconsin Supreme Court in 2008 and a Hagedorn win would mean they'd likely preserve that majority until at least 2023.

Neubauer's campaign said Wednesday it's raising money for a recount.

"This isn't the outcome we hoped for, but it's what our campaign for justice must now tackle: with the vote total neck and neck, it looks like we're heading into a potential recount," a campaign statement said. "We ran this campaign without bringing in partisan politics, true to Lisa's vision for an impartial, fair, and just Supreme Court. Unfortunately, we faced a deluge of outside spending — over $1 million in the last week alone."

In a video on Facebook, Neubauer asked for donations to fund a recount for the election she said has a "razor thin margin."

Hagedorn said his campaign is also fundraising for a recount, but he doesn't believe it's necessary. The Hagedorn campaign estimated a recount would cost about $2 million, but didn't know the exact amount.

The cost is dependent on how many counties are recounted.

During an interview Wednesday morning on Wisconsin Public Radio, Gov. Tony Evers said it appears the election is close enough for a recount.

"I know everybody that voted, even those that did not vote, want every vote to count," Evers said. "So it's likely to be a recount and we'll just have to wait until after that to declare a victory."

During his acceptance speech Wednesday morning at the Ingleside Hotel in Pewaukee, Hagedorn credited his victory to community members who believed in him. He said he needed a grassroots campaign because he was outspent.

"It has been a hard fought race," Hagedorn said. "Due to the outside advertising, many have said and believed things about me that aren't true. This was a grassroots effort. An organic campaign of people who gave so generously to this campaign and this work."

The last time Wisconsin went through a statewide recount was in 2016, when President Donald Trump defeated Democratic presidential nominee Hillary Clinton by a margin of almost 23,000 votes. There was also a recount in the 2011 Supreme Court race when Justice David Prosser defeated challenger JoAnne Kloppenburg by about 7,000 votes.

Hagedorn has been a judge for three years. He clerked for former state Supreme Court Justice Michael Gableman, whose 2008 election established the conservative majority on the court that still exists today.

Republican Gov. Scott Walker appointed Hagedorn to be his first chief legal counsel. He held that job for more than five years.