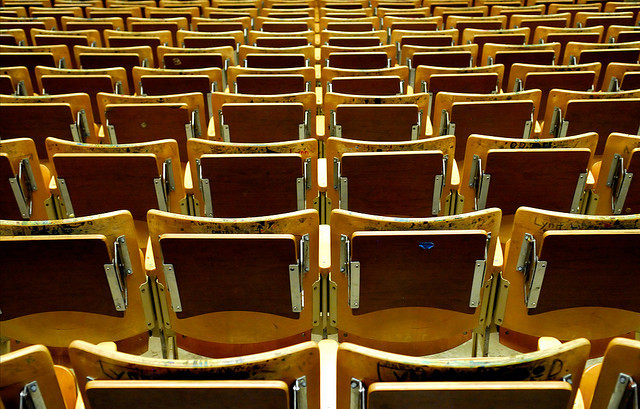 Above, an empty lecture hall on the University of Wisconsin-Madison campus. Photo: Kevin Lau (CC-BY-NC-ND).

UW Professor Says State Loses 14K College Graduates Per Year, Most Of Them Between Ages Of 21 And 29
By Shamane Mills
Share:

As people age out of the workforce, state job growth will depend in part on young educated professionals staying in Wisconsin. However, many young graduates are leaving, joining a trend commonly referred to as the “brain drain.”

Stevens Point native Brian Novotny has been at the University of Wisconsin-Madison for six years. He calls Madison an “amazing” city, but he wants to leave the state after he graduates and use his master’s degree in kinesiology to coach sports or work in physical therapy.

“I don't like winter, so I'm hoping to move to California or North Carolina,” he said.

Angela Limbach, from Milwaukee, has an undergraduate degree in geology, and is finishing up a certificate in geographic information systems at the UW. She'll locate where there are suitable jobs, but as a climber, she'd like to be around mountains.

“My family's here and I love it here, but going somewhere that fits my recreational interests would be better for me,” said Limbach.

The departure of young people like Novotny and Limbach from Wisconsin is a cause for concern for many economic experts. They say such people are needed not only to help bolster job growth, but to help form a stable tax base and boost declining populations in rural areas as well.

Earlier this year, the Governor's Conference on Economic Development discussed the brain drain. One of the featured speakers was UW-Madison's Morris Davis with the Wisconsin School of Business, who had crunched some numbers on age and job growth that he wanted to share.

“Job growth is on everyone's mind, and I wanted to get a handle on what kind of job growth we could expect in Wisconsin,” said Davis.

Still, he said, Wisconsin is doing better than neighboring states.

“If you were to rank the (Midwestern) states we're second-best relative to Minnesota,” said Davis. “But it doesn't mean that we don't have a problem. It’s just that Illinois and Michigan’s problems are worse than ours.”

Communities in Search of a Solution

The brain drain isn't new to Wisconsin, according to Jeff Sachse, a labor economist with the Department Workforce Development.

“It's an issue that we've certainly been aware of within the department, and certainly others have been looking at this since the 1990s,” said Sachse.

What's different now, he said, is that quality of life issues are increasingly important for young professionals and new college graduates. Groups like the Wisconsin Public Interest Research Group and the Rockefeller Foundation say access to public transportation is one factor that helps millennials decide where to live.

Once residents leave, it can be hard to get them back. In Price County, the population actually grew during the ’70s and ’80s but shrunk in 2000.

“When the wood industry declined, I lost a lot of human capital to the Twin Cities,” said Gail Huyke, the community development educator in Price County. “Young engineers, folks who served on school boards, heads of civic groups. When the economy took a downturn, a lot of them left our community and the state to go to the Cities.”

Price County is currently conducting a survey aimed at those between the ages of 29-39 to find out why they left and what would bring them back.

On a bigger scale, the state's lead economic development agency, the Wisconsin Economic Development Corporation, along with the Wisconsin Alumni Association, is hoping to lure some Wisconsin natives back.

“In fact we just hosted a reception for Wisconsin graduates in Denver when we were out there for another conference,” said Reed Hall, CEO of WEDC. “These are small things, but we'll be doing more of these things to remind people Wisconsin is a great place to live and work.”