The Borax Dinner Party That Kickstarted The FDA

Science Writer Deborah Blum On The Government Scientists Who Made The Case For Food Regulation By 'Eating Dangerously'
By Mark Riechers
Share:

Complain all you want about overzealous government regulators, but without them we’d still be drinking dirt in our coffee and finding formaldehyde in our baby formula. That's how it was in the early days of industrialization within the United States food economy, when the industry was beginning to experiment with using newly discovered chemicals as additives in what Americans bought at the grocery store. 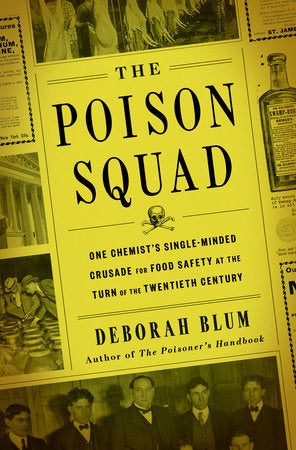 "There was an insane amount of food fraud in the late 19th century," says Deborah Blum, science journalist and director of the Knight Science Journalism program at MIT. "It was like a carnival of adulteration — there's no government standards for anything."

In this conversation with "To The Best of Our Knowledge," Blum shares the story of one chemist — the subject of her new book, "The Poison Squad" — and his quest to empower federal government scientists to protect the American public from the dangerous things being added to their food — like borax.

Steve Paulson: Borax is the stuff that I used to scrub out my sink, or put on the counter to keep the ants away. You're saying people put that in food intentionally?

Deborah Blum: Yes. I kind of love the borax story. They'd discovered these huge mining opportunities with borax out in California, and that it also had antiseptic qualities. It was anti-microbial, and it doesn't taste that bad, which is one of the things that's really important.

So they put it in butter going to England. You actually have them saying "Ah, the British love the taste of borax in their butter. This is a wonderful thing and everything tastes better with borax."

Because they were using borax — and then formaldehyde, which is an ammonia fluid — they started calling these preserved products "embalmed beef" or "embalmed milk." One of the manufacturers, when he was talking about the use of borax in meat, would say "we all eat embalmed beef, and we love it."

SP: Embalmed beef. What a horrible thing to say about what you're eating! Did embalming food work?

DB: Formaldehyde is a good preservative. It stops bodies from rotting. And in milk, it worked really well. Take this with a grain of salt because I did not drink formaldehyde, but the story is that it's kind of slightly sweetish in taste. So you see this conversation in the 19th century about how it restores the taste of bad milk. Thanks to the wonders of formaldehyde, it has that fresh, sweet taste again.

SP: So was it actually dangerous to put these substances like formaldehyde and borax in these foods?

DB: People got sick or they died. Especially children. You're feeding what turned out to be higher and higher doses of formaldehyde to young children in their milk — they died. There was a case in Indianapolis and they clocked more than 400 deaths.

SP: Wow. Let's talk about the man at the center of your story, this chemistry professor named Harvey Washington Wiley, who was brought into the government to start testing some of these foods. Who was this guy?

DB: He was a Midwesterner— got a (master's degree) in Indiana. He got a chemistry degree at Harvard. And he had actually gone to Europe, where they were much more advanced about this stuff. He was recruited by the federal government to be the chief chemist in agriculture's tiny bureau of chemistry — it had six chemists working in a basement.

SP: And then there was another thing he did — he actually got some of his people to taste some of these foods to see if they would get sick.

DB: He set up this experiment that was nicknamed "the poison squad" by the local newspapers in which he got young male government employees, clerks who had very little money and were happy to get free meals. This experiment started in 1902, and there is none of the human subject protection rules that we have now. He's just like, "Yo, I'm going to ask for volunteers in the federal government to dine dangerously," and that's what he did.

And that was the sort of deal with the devil: we'll give you three free meals a day, beautifully cooked by our master chef and only using great ingredients — you're not allowed to eat anything anywhere else. But half of you, for given periods of time, are going to have to also take capsules of the suspect compound of that particular test. So you'll be having borax with every meal. And you'll be having formaldehyde with every meal.

SP: Sounds like a sort of dinner party — where you're poisoning the guests.

SP: So how sick did they get?

DB: Some of them got really sick, and it really depended on the compound. With formaldehyde, people were really throwing up. (They got) so sick so fast that they just canceled the test.

With borax, it was more gradual. They took very low doses. And then they would ratchet the dose up. What they found was at very low doses, some of them were a little whiny but no one was really sick. By the time you start hitting a medium dose, people had stomach upsets, they had G.I. upsets, they had headaches, they had bloating. Eating this cleanser on a daily basis was not working for them.

SP: So he came up with all of these results — this really kind of remarkable science experiment, testing all these different foods. How did the food industry respond?

DB: The food industry was really unhappy. The Pacific Borax Company —the term we'd use today (would be) "fake news" — had their publicists assume a fake name and plant fake stories in newspapers across the country, each criticizing Wiley and pretending that people were (actually) dying of food poisoning because borax was not in their food. It was really crazy.

SP: Wow. There's some other fascinating characters in the story that you tell — one is the writer Upton Sinclair, whose 1906 novel "The Jungle" was all about the appalling conditions in the stockyards of Chicago. He wanted to expose how horrible the working conditions were in these slaughterhouses, but it sort of had other unintended effects, didn't it?

DB: People were sort of already starting to simmer, and then you get these really crazy descriptions of food processing in "The Jungle" in which they're poisoning rats and then just chop up the rat bodies and throw it into the meat. Meat is rotting and molding, and they scrape that off and throw a little of formaldehyde or borax in it, and blood is dripping everywhere. There was just a firestorm of a response.

SP: Well if you haven't made our listeners queasy up until now ...

DB: I can do better! When ("The Jungle") came out, of course the packers are like, "This is fiction! This is fiction!" And Doubleday Page had sent a copy of it to President Teddy Roosevelt, and he said "This can't be right." So he sent an investigative team. Everyone is like "this can't be right. And they found that it was worse." There's these horrible descriptions in their report of cows falling into the workers latrines, and then just being dragged across the floor, and chopped up after that.

Roosevelt, when he got this report, uses it to blackmail Congress. The first Meat Inspection Act passed in June of 1906, and with it, Wiley's long-fought-for food and drug law was passed right after that. So the one led to the momentum that finally pushed to the other over.

SP: So this sort of seems like ancient history now. All of this happened 100 years ago or so, we have a whole regulatory system in place to monitor food safety. Most of our foods are labeled. How safe is our food now?

SP: Even though we are now eating them.

DB: That's exactly right. One of the myths is that if it's on your label, it's been safety tested. It hasn't necessarily been.

SP: Sounds like in some ways we are still living in Harvey Wiley's world.