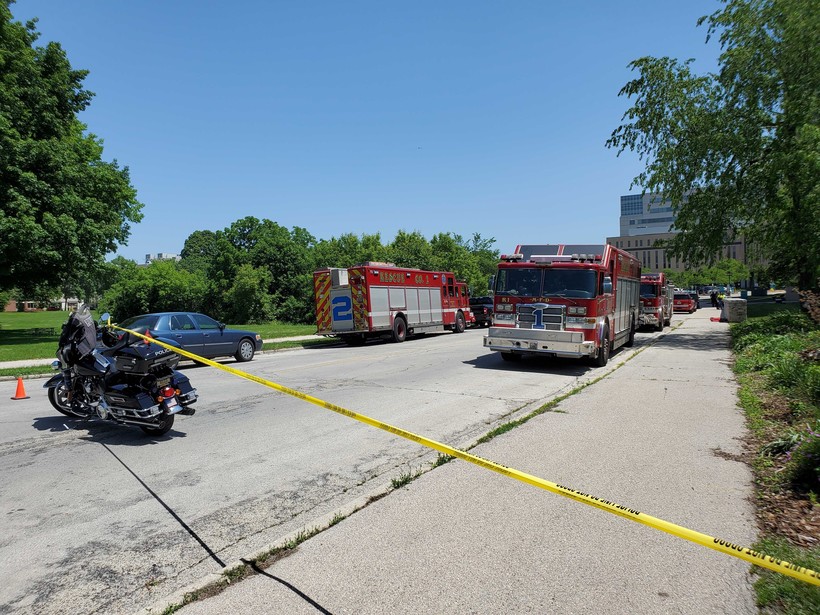 Crews blocked off an area near Aurora St. Luke's Medical Center on Tuesday as they searched for the bodies of an 10-year-old boy and two adults who drowned in high waters on Monday evening. Rob Mentzer/WPR

Boy was chasing after soccer ball when he fell into a concrete drainage ditch
By Rob Mentzer
Share:

The bodies of two men who drowned trying to save an 10-year-old boy were found by searchers Thursday, nearly three days after they were swept away by high waters.

The boy who drowned was identified Thursday afternoon as Mohammed A. Roshidulcah by the Milwaukee County Medical Examiner.

Early Monday evening, Mohammed was outside playing soccer with a friend after a storm. He was chasing after the soccer ball when he fell into a concrete drainage ditch on the city's South Side. He struggled against the fast-moving current from the recent downpour.

His father jumped in to save him, "giving him a bear hug," according to the medical examiner’s report. When his father also struggled against the current, another man went in after them in an attempt to create a “human chain” to the shore of the drainage ravine. That man, too, was swept away.

Crews from Milwaukee’s police and fire departments searched for the men beginning Monday night and continuing early Tuesday morning. Members of the dive teams from the both departments searched in drainage tunnels and in the Kinnickinnic River, and the departments used boats, drones and underwater cameras in the search. Citizens helped with the search as well; one of them first spotted Mohammed's body on Tuesday afternoon, more than a mile downstream from where he fell into the drainage ditch.

The medical examiner confirmed that the two bodies found in the river on Thursday were identified as Mohammed's father and the other man who tried to save them. Authorities have not released the father's name or the other man's identity, but in a brief press conference Thursday afternoon, Milwaukee police inspector David Feldmeyer said one of the men's bodies was spotted Thursday morning by a citizen, and the other was recovered by officials in the afternoon.

Police and fire officials said they hope the recovery of the bodies can help their families and communities in the grieving process.

"We are hopeful, and we offer our support that they are going to be able to pull through this and find strength on the other side," Milwaukee Fire Chief Aaron Lipski said. "Not any one of us can imagine what such a huge loss in this community must feel like."

Mohammed would have turned 11 on July 4.