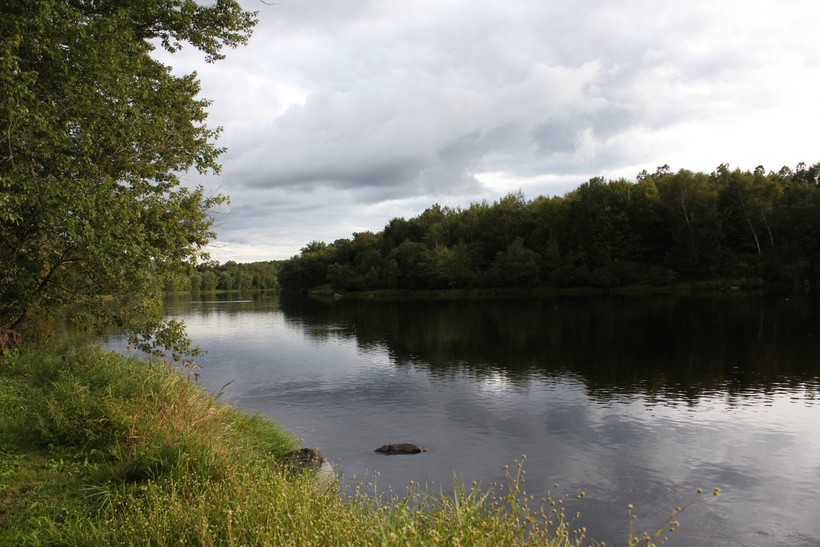 This body of water was once the site of the Flambeau Mine, which is the only nonferrous mine that has operated in Wisconsin in the last 40 years. Rich Kremer/WPR

The Wisconsin Natural Resources Board voted to postpone action on proposed new permanent rules that would make mining companies pay more for permits and licenses for nonferrous mines. The new regulations would also require companies to avoid areas that have been deemed "unsuitable" for mining.

On Wednesday, a mining company official told the board it's waiting for clarity on regulations before it moves forward with the exploration of Reef and Bend mineral deposits in the state as soon as next year.

Board members considered an amendment to the rules that would further define which areas of the state would be designated as unique or unsuitable for mining. They also considered an amendment to rules requiring that tribes be notified of proposed mining projects. Several board members voiced discomfort with changing language at the last minute, opting to table a vote to allow more time to amend rules that would be put in place.

The new rules would apply to nonferrous metallic mineral mining, which includes extraction of minerals like gold, zinc and copper. The changes are being made to comply with a 2017 law that lifted the state's decades-old moratorium on sulfide mines.

The moratorium required companies to prove other mines operated and then were closed for 10 years without causing environmental harm.

The 2017 law changed permitting standards for nonferrous mines that require projects to find mines are using technology to ensure compliance with environmental laws and minimum standards for bulk sampling. The law also repealed requirements on overseeing activities near wetlands and an irrevocable trust fund that pays for long-term care of a mine site into perpetuity. Those items would be removed from the new rules.

The Wisconsin Department of Natural Resources hasn't updated rules for those nonferrous mine operations since the rules took effect in 1982.

The proposed rule changes are estimated to increase costs for mining companies by about $502,000 over the life of a project, according to board documents. The DNR proposed increasing exploration fees and costs for the regulatory review of projects. The DNR's mining rules coordinator, Larry Lynch, said the average estimated fee increases was roughly $33,000.

State regulators have approved only one nonferrous mine in more than four decades, which was the 80-acre Flambeau Mine located south of Ladysmith along the Flambeau River in northwestern Wisconsin. The mine stopped operations in 1997. The mine served as a catalyst for the state's sulfide mining moratorium that was repealed through the 2017 law.

The proposed rules also include a list of areas where mining wouldn’t be allowed based on a statutory definition of "unsuitability" that declares unique lands off-limits or unsuitable for mining.

Those areas would include wild and scenic rivers, state parks and wilderness areas, among other sites. Many public comments requested expanding the list of areas that would be unsuitable for mining. One such place being the Wolf River, Lynch said.

Badger Minerals, a subsidiary of Canadian-based Can-American Minerals, conducted mine exploration in the headwaters of the Wolf River in southeastern Oneida County earlier this year. The company has since abandoned further plans to explore minerals in an area known as the Shoepke site in the county.

Scott Manley is the executive vice president of government relations for Wisconsin Manufacturers and Commerce, the state’s largest business group. He told the board that the definition of unsuitability included in the rules does not track with state statutes.

"When we have a definition of unsuitability as we do under this rule, where we have the authority, or at least the apparent authority, that the department can designate unilaterally wide swaths of our state as unsuitable, and, therefore, off-limits to mining, that doesn't do anything to improve regulatory certainty," said Manley.

Attorney Rob Lundberg with Midwest Environmental Advocates disputed the business group's claims that the DNR was changing the definition of areas deemed unsuitable for mining. He noted the definition is consistent with the current rule "that has been in place for nearly 40 years."

Mining company Aquila Resources supports the new rules, said David Anderson, the company's general manager of the Back Forty mine project that is near the Michigan-Wisconsin border. Anderson said he echoed remarks by WMC related to lands deemed unsuitable for mining.

He said they're waiting for regulatory certainty prior to exploring mineral deposits in Wisconsin.

The company hopes to advance mineral exploration on those deposits next year.

Tina Van Zile, environmental director for the Mole Lake Band and Sokaogon Chippewa Community, said the tribe continues to object to changes made under the law passed in 2017 while recognizing that the proposed rules had to be brought in line with the statutes.

She objected to the department's definition of groundwater that may be a source of drinking water for people because it excludes consideration of other living beings and potential impacts. She also requested the department include a provision that was omitted in the proposed final rules. That provision would notify tribes within 60 miles of a proposed mine or exploration activity.

"Otherwise, it could be interpreted that if you are outside of federally recognized treaty rights areas, they literally have to have a portion of their land up against the boundary of the proposed prospecting or mining activity in order to get notified," said Van Zile.

Lynch said the omission wasn't intentional and the department was actually trying to broaden notification around projects.

The board will revisit the rules at its next meeting in January. The rules would be subject to approval from lawmakers and Gov. Tony Evers.