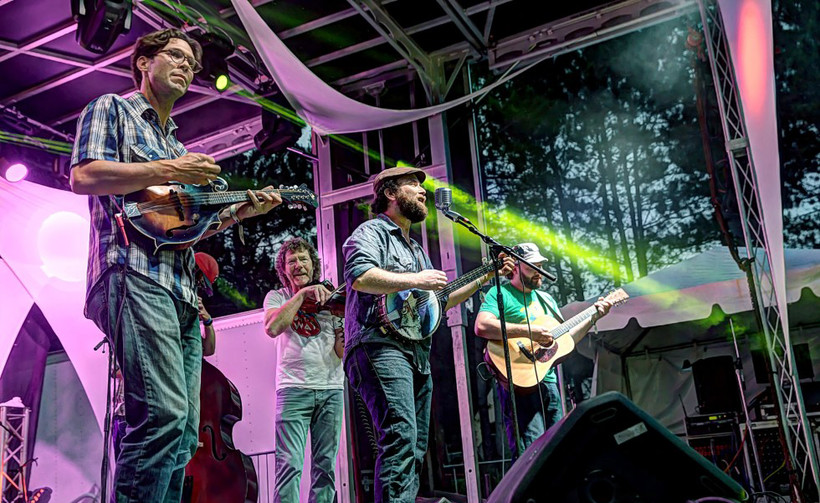 Pert Near Sandstone and Sam Bush playing at Blue Ox Music Festival in 2015.

The number of major music festivals held in the Chippewa Valley is blossoming. Recent reports show five festivals alone bring in millions of dollars to the economy. One of those, the Blue Ox Music Festival, is this weekend, June 9 to June 11.

It’s hosted by Pert Near Sandstone, a band that formed more than a decade ago as friends jamming in their Minneapolis living room. Fast-forward a few years and they’re touring the country and performing on "A Prairie Home Companion." They credit music festivals in Wisconsin and Minnesota for helping shape their sound and performance.

"Playing music festivals is what took us to a whole new level as a band, said J Lenz, guitar player and founding member of the band. "There were a lot of festivals in Minnesota and Wisconsin back in the day when we were starting out. There are still a few, but not as many when we started 12 years ago."

And now, Pert Near Sandstone is hosting their own festival in Eau Claire. Blue Ox Music Festival features bluegrass, Americana, classic country, and more. A number of national acts, like Bela Fleck and the Flecktones, Railroad Earth, Del McCoury Band, and Sam Bush will play. Many regional mainstays will also take the stage, like Charlie Parr, Horseshoes & Hand Grenades, the Big Wu, and Useful Jenkins.

Bluegrass is a music style that has been around for centuries and Pert Near Sandstone banjo player Kevin Kniebel said it’s thriving in the music festival scene for a reason.

"It’s a very accessible and organic form of music that transcends genres and generations," he said. "People can’t help but be happy when they listen to it."

"One thing about bluegrass festivals and music is that it’s very cooperative," added Lenz. "People are camping out and hanging around campfires and playing music with other people all night. That’s a different kind of scene from a lot of other music festivals."

Pert Near Sandstone is working with Country Jam USA President Jim Bischel and his family to host the festival. The band members say it was "a great stroke of luck" to find an "amazing and strong partner."

"This community thrives in Wisconsin, Minnesota, and the Dakotas," said Nate Sipe, Pert Near Sandstone mandolin and fiddle player. "We’ve gotten close with the organizers and a lot of these bands. Blue Ox is our festival, we curate it. But we think of it more as the region’s festival. We can all be proud this exists in our area."

For more, listen to the full conversation with Pert Near Sandstone here.