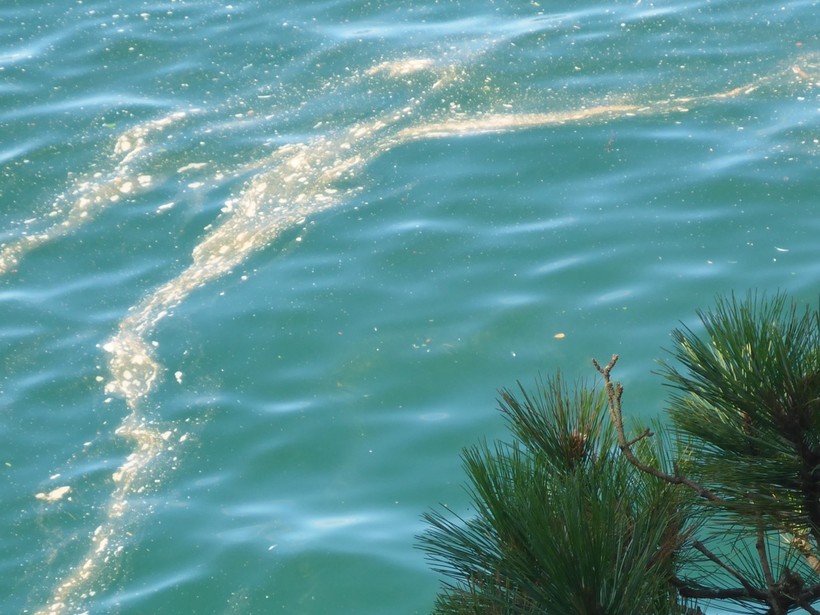 Blue-green algae was spotted before on the shores of Lake Superior in 2012.

The National Park Service has once again spotted blue-green algae on the shores of Lake Superior near the Apostle Islands, and flooding from July’s storms may have played a role.

Brenda Moraska Lafrancois, regional aquatic ecologist with the National Park Service, spied the pollen-like scum floating on the shore while swimming one day near Meyers Beach in late August. She said the blue-green algae was last spotted near the Apostle Islands sea caves four years ago.

"It’s one that also turned up in the 2012 algal blooms following the big 2012 floods … It’s a colonial filamentous blue-green algae," she said. "It’s one of the ones that’s a known toxin producer under certain circumstances."

But the ecologist said there’s no evidence the blue-green algae was producing toxins. Even if it was, she suspects levels wouldn’t warrant any public health concerns.

Gina LaLiberte, statewide blue-green algae coordinator for the Wisconsin Department of Natural Resources, said this year’s flooding may have played a role in the algae's appearance, but it’s hard to tell, LaLiberte said, noting the bloom was discovered several weeks later.

"And this particular species that bloomed in Lake Superior, at least in Europe, has been found even in lakes that have low to moderate nutrients," LaLiberte said. "At least this isn’t one of the species that typically blooms in really nutrient-impacted systems."

LaLiberte said they see the most problems with warm shallow water areas with a lot of nutrients. Early September is the peak of the blue-green algae season when waters are often at their warmest, she said.

"One of the things we’re trying to understand better is whether what’s going on in the nearshore is really a separate phenomenon from the offshore," Moraska Lafrancois said. "We might get a situation where you get nutrients or algae blooming close to shore, and that’s not mixing real well with offshore waters, so you end up with conditions that look more like a nutrient-enriched lake than Lake Superior close to shore."

LaLiberte said it’s difficult to characterize what they’re seeing with blue-green algal blooms in the state because they’re difficult to track. Although, she noted efforts are underway to remotely monitor blooms via satellite on larger bodies of water. She added it’s also difficult to determine which blooms will become toxic.

"We’re still working on the science to figure out when and why they produce toxins," LaLiberte said. "There are a lot of factors that go into it, and those factors may be very water body specific."

However, LaLiberte said people should take precautions if they’re swimming or recreating in waters with algal blooms.

"Even if it’s not blue-green algae, it’s always a good idea to avoid swallowing surface water because there are a lot of organisms other than blue-green algae that can make you sick," LaLiberte said.