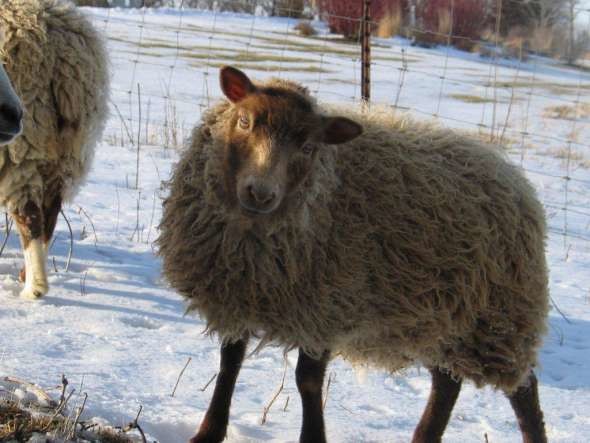 Jim and Laura Thompson’s Jefferson County hobby farm had nine new lambs. But one looked a little different from the rest.

She was tiny, much smaller than the others. She stayed close to her mother, quiet and afraid. And she was moving her head all about, keeping her nose in the air.

"It seemed clear to me that she was really trying to get a handle of what was going on around her, five minutes into the world, with her hearing," Jim said. "...I had a suspicion she may be blind."

The next day, the veterinarian confirmed: the lamb was completely blind. He told Jim and Laura that if they raised it, they would be in for a challenge.

But Laura had made up her mind.

"She had already named the lamb, a small brown thing with a little white halo on top of her head," Jim said. "She said, 'We’re gonna name her Peanut, and she’s gonna be just fine. We just need to give her a little help.'"

Jim said he knew Peanut had an interesting story. But he didn’t realize until he began the writing process how few children’s books existed like this one.

"There have been very, very few children’s books written about, especially happy stories like Peanut’s, about disabled animals that have overcome," he said.

Peanut’s story is a happy one, but it is a journey, too, that began her second day in the barn.

Peanut had easily learned to nurse and be cleaned. But Jim and Laura noticed Peanut had not yet laid down.

"She did not understand that it was time to take a nap, lay down. Had never seen it done," Jim said. "Maybe lambs get a little clue about laying down from watching their mother."

So Laura took Peanut through the motions to get her to understand, folding the lamb’s front legs, then back legs.

On the third try, Jim said, Peanut "clunked right out" and went to sleep.

"We couldn’t take for granted that she knew how to do anything, really," he said.

While Peanut dealt with bullies, she learned how to find food and drink water, all with a bit of Jim and Laura’s guidance.

But ultimately, Peanut figured things out on her own. She learned to fend for herself.

"About a year and a half of her being with us, I thought it was just a cool story, watching her adapt and overcome these hurdles," Jim said.

He wrote a story about it for national publication Sheep magazine. They suggested that he turn it into a children’s book.

He couldn’t see why not.

"There was really no good reason not to, other than had I known the amount of work,” he said. "Which is fine. It was a labor of love."