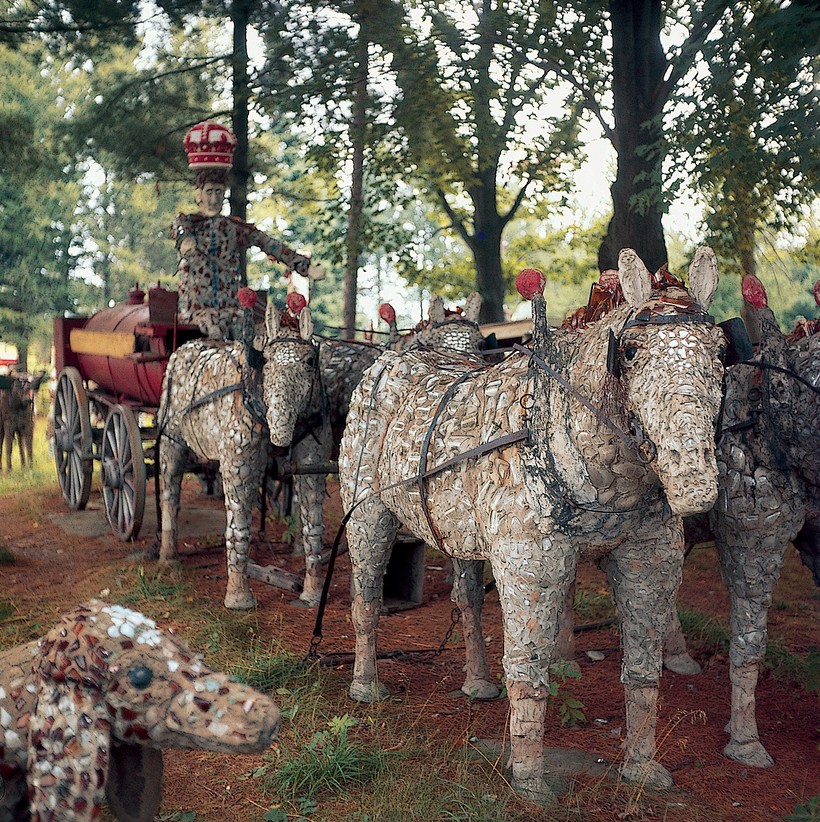 Nonprofits Across The Midwest Strive To Take Care Of Artist Environment Sites
By Tim Peterson
Share:

That's how Cortney Anderson Kramer described the texture of the space at Wisconsin's Dickeyville Grotto.

"When you go there, it's built up at a Catholic church. It is a monument to patriotism as well as Catholicism. And it is a sort of architectural grotto shrine, that is encrusted with everything from geodes and rocks, to what is recorded to be a Ford gear shift knob," Anderson Kramer told WPR's "Central Time" host Rob Ferrett. 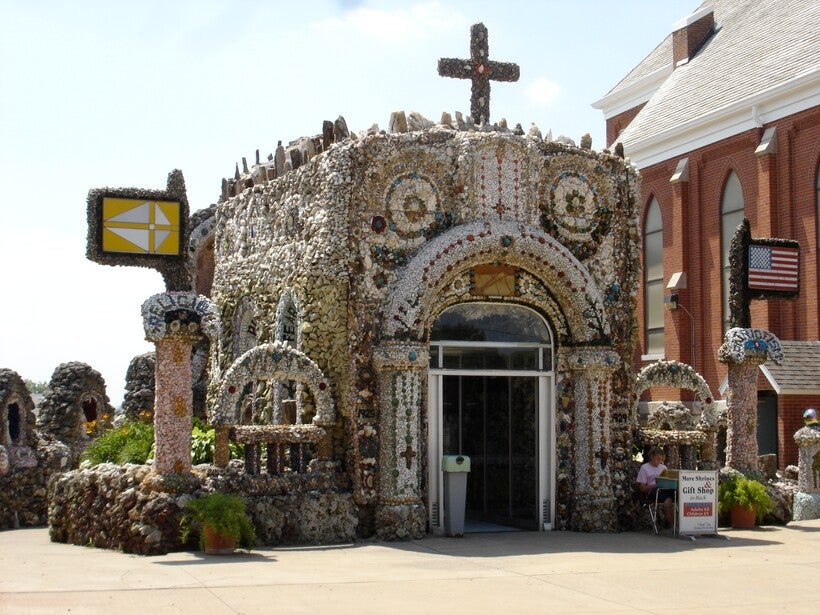 Anderson Kramer is a Ph.D. candidate with the University of Wisconsin-Madison Department of Art History, where she focuses on concrete sculpture gardens in the Midwest.

WPR turned to Anderson Kramer after receiving an audience question about this type of monumental artwork from Chris Murphy in Madison. He asked: "Why are there a higher concentration of outsider artist environments in Wisconsin than anywhere else in the U.S.?"

For starters, what is an outsider artist environment?

Anderson Kramer offered this definition: "An outsider art environment is going to be a space that is an artwork that is monumental in terms of its size, and the amount of time that it took to make. But it can also be monumental in the number of parts."

Like Dickeyville, the Wisconsin Concrete Park located in Phillips is another great example of this type of work, Anderson Kramer said.

"There are hundreds of sculptures on this site that the artist Fred Smith created over the course of decades," she said. 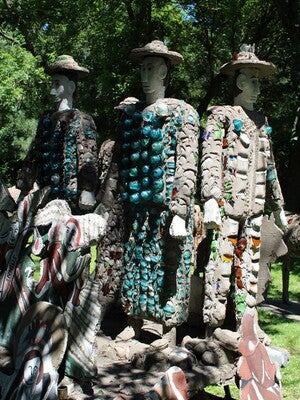 Similar art can be found all over the world, Anderson Kramer said, but she added that organizations in the Midwest, especially Wisconsin, do a great job of taking care of artist environment sites. One such organization is the John Michael Kohler Arts Center (JMKAC) in Sheboygan.

Laura Bickford, an associate curator with JMKAC, told Ferrett on WPR's "Central Time" that it's important to preserve the cultural contribution of this kind of art, as with any artwork.

But specifically for artist-built environments, Bickford said, "I like to think of them as a genre-busting genre, where they’re really made by people across walks of life who ordinarily maybe wouldn’t feel that they were able to make works of art, or wouldn’t have access to a museum."

"So they can really speak to a kind of everyday vernacular," Bickford continued, a "sort of really true way that people are living on the land."

For Anderson Kramer, a favorite example of this is the Rudolph Grotto Garden in Rudolph. "It’s a beautiful, sprawling garden," she said. "It was once a plot of farmland, that’s transformed into this woodland. And it is absolutely stunning." 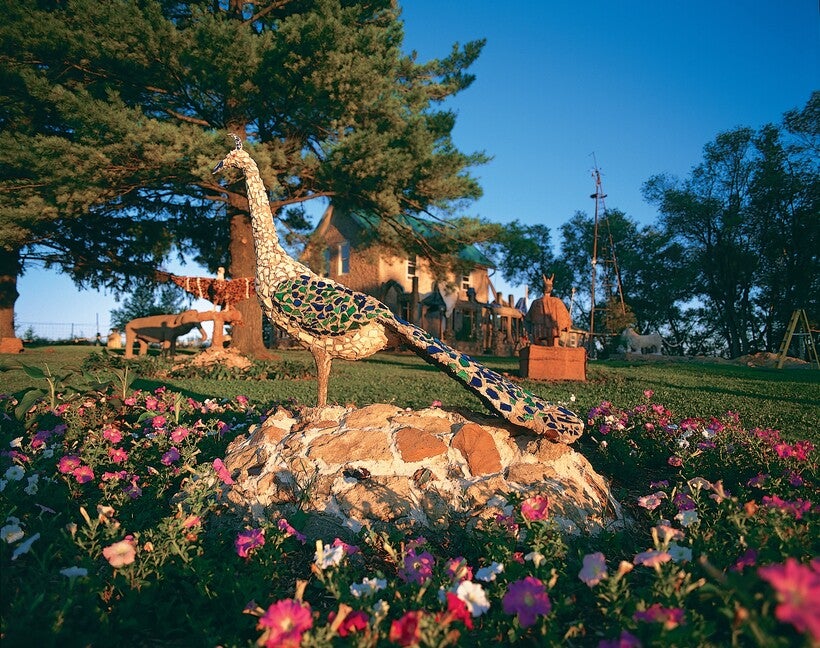 Come To The Concrete

Anderson Kramer admitted there are a lot of these environments in Wisconsin, "and that’s owing to tourism at the time. You think of around the ’30s and ’40s when these are being made, we’re seeing lots of tourism to the (Wisconsin) Dells, to Door County, and homeowners are capitalizing on this traffic, creating artworks, sculptures that are driving people to their homes."

The increasing accessibility of concrete — during that period — as a tool for do-it-yourself garden-building was also a big factor, Anderson Kramer said. This could be anything from creating a border for the garden, to making your own bird bath, or bird house — whatever people thought would increase the beauty of their garden.

"It just so happens that these artists really sort of were bitten with the concrete bug and just continued to grow in their confidence," Anderson Kramer said, "in how they created with concrete, creating sculptural spaces, architectural spaces, adding concrete to their homes."

It doesn’t hurt that concrete sculptures can pretty well withstand the Midwest’s climate.

Bickford and JMKAC took on the challenge of gathering and displaying examples of this type of art in Sheboygan at a new Art Preserve structure, which she curates.

"All of the work was made somewhere else and designed to be in that place forever," Bickford said. "So we’re already starting out with this work that doesn’t really belong necessarily even inside, or certainly not in a museum."

To solve the problem, they dedicated 56,000 square feet in a new building, to house pieces — and sometimes entire works — from more than 32 different artists from the U.S., and one from India. Featured artists include Fred Smith of the Wisconsin Concrete Park, Nick Engelbert who created Grandview in Hollandale, and Madeline Buol, the artist behind the self-named grotto in Dubuque, Iowa.

The new building fits into a hillside, Bickford said, so "despite it being three stories, on every level you’re still sort of on ground level, which I think makes for these really interesting vistas. In a single view you can really take in the spectrum of these environments."

Bickford said visitors can expect to see a mixture of elements of a typical art exhibition, "but then also sort of open painting racks, sort of glass shelves where people can see objects at rest. There’s peeks into the conservation workshop. So this is really kind of a working, functioning museum storage space that also happens to be open to the public, where people can come and learn about this form of art." 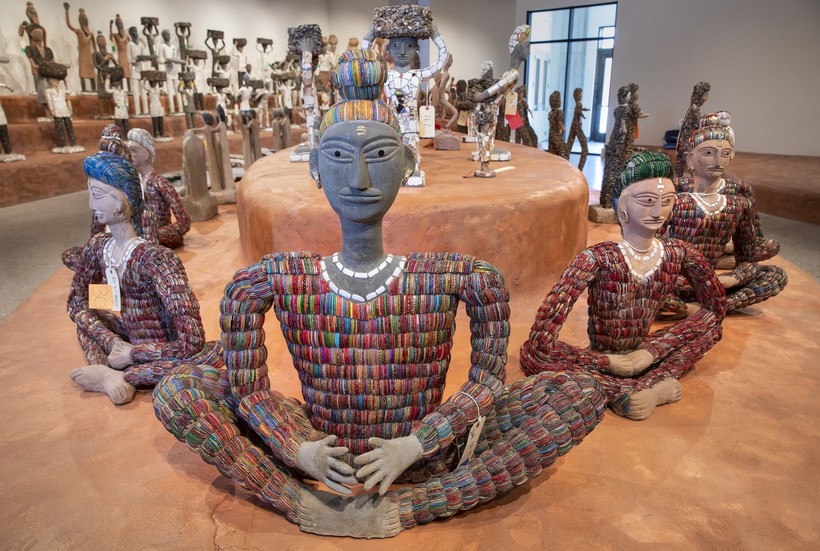 "Wandering Wisconsin" is a downloadable state map that Bickford recommends of many of the major artist environments Wisconsin nonprofits are caring for.

But there could still be undiscovered, or at least less well known or documented, examples off the beaten path.

"I would always say the best way is to never take the highway, and you’ll never know what you’ll find when you take the long way around," she said.