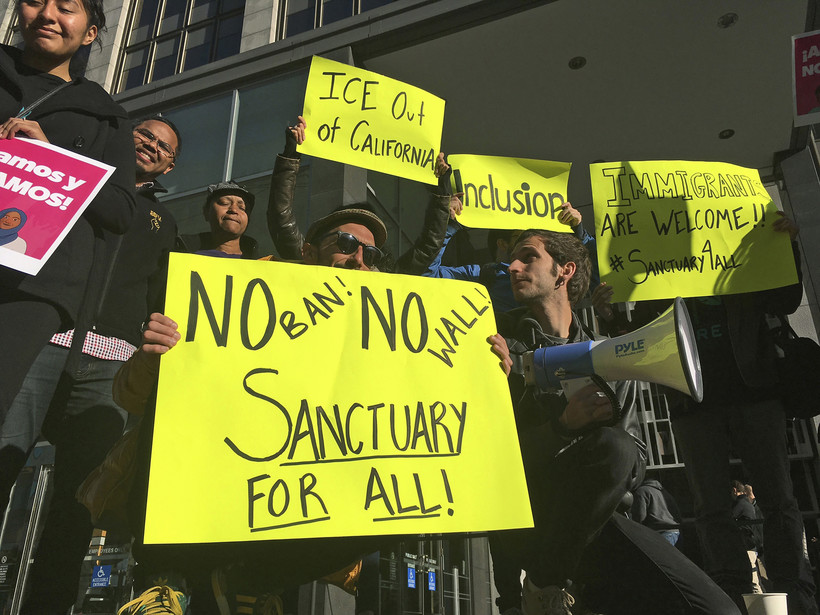 In this April 14, 2017, file photo, protesters hold up signs outside a courthouse in San Francisco. A federal appeals court gave the Trump administration a rare legal win in its efforts to crack down on sanctuary cities. Haven Daley/AP Photo

Bill To Ban 'Sanctuary Cities' Back In State Legislature

Republicans in the state Legislature are resurrecting a measure to ban municipalities in Wisconsin from becoming "sanctuary cities" that limit their cooperation with federal immigration enforcement.

The bill would not only prohibit the existence of sanctuaries, but require local law enforcement to comply with U.S. Immigration and Customs Enforcement (ICE) detainers. Detainers are requests to local police to keep certain people they arrest in jail so they can be transferred to ICE custody.

Failure to comply could cost anywhere from $500 to $5,000 daily depending on the size of the offending city, village, town or county.

A state Senate committee held a contentious public hearing for the bill at the state Capitol on Tuesday.

Sen. Steve Nass, R-Whitewater, a sponsor of the bill, said municipalities have no right to defy federal rules.

"This is not about local control. This is about obeying the law. When we elect individuals, we elect them to obey the law," he said.

But whether or not sanctuary policies violate federal law is up for debate. "Sanctuary city" is not a legal term, but a general description of cities that limit cooperation between local law enforcement and federal immigration enforcement. Those limits might include declining an ICE detention contract, or limiting ICE interrogations in jails, according to the Immigrant Legal Resource Center, which keeps a map tracking local police/ICE cooperation policies around the country.

"These cities cannot actually shield anyone from deportation, however, or prevent the federal government from enforcing immigration law within their city limits," the SPLC’s website says.

And when it comes to ICE detainers, the agency itself describes them as requests.

"They’re not mandatory, and this is because the 10th Amendment prohibits the federal government from commandeering state officials to enforce federal law," said Steven Monroy, an attorney with the Mexican American Legal Defense and Educational Fund.

Nass pointed to various crimes across the country committed by people he described as "illegal aliens." He said the bill would keep criminals in custody and make Wisconsin safer.

Rep. JoCasta Zamarripa, D-Milwaukee, argued the bill would have the opposite effect, making those living in the country without proper documentation hesitant to report crimes for fear of deportation.

"Even victims who are here legally but have undocumented friends and families could be afraid of putting their loved ones at risk and won't make that call to law enforcement with a bill like this in place," she said.

Zamarripa expressed fear the bill will unfairly affect Latinos. Nass and Sen. Robert Wirch, D-Somers, got in a heated exchange when Wirch accused Nass of ignoring violence committed by non-immigrants.

"When are we gonna talk about violence by white nationalists? Anti-semitism? Shooting up churches? Violence all over the country, and yet we hear that immigrants are violent?" Wirch said.

Sen. Van Wanggaard, R-Racine and another sponsor, said the bill is also designed to protect immigrants "from thugs and murderers and rapists, etc."

"Don’t make this racial, because it’s not," Wanggaard said.

This isn’t the first time this bill has come up in the Legislature. Similar measures were floated in 2016 and 2017.

Zamarripa pointed out previous attempts failed under former Gov. Scott Walker, a Republican who had control of both houses of the Legislature.

Sanctuary policies have been questioned on the national level, too, with the Trump administration petitioning the U.S. Supreme Court to void California’s sanctuary laws.