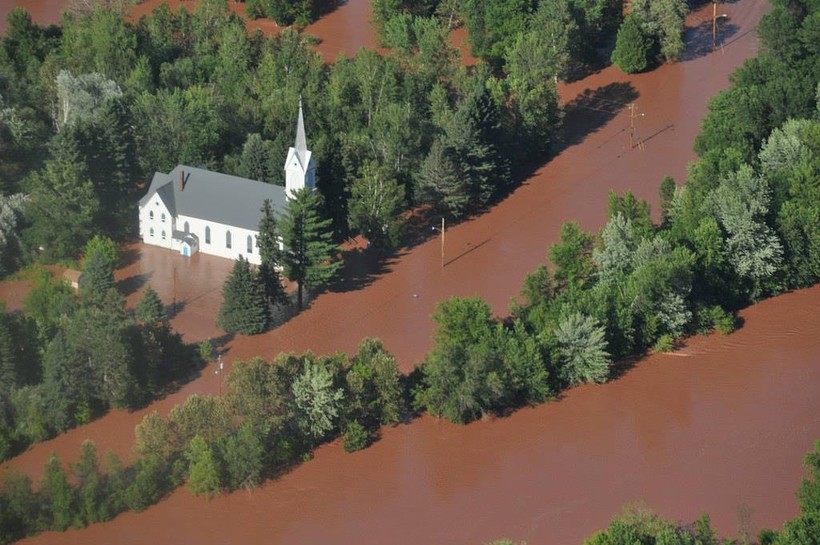 Flood waters surround the reservation after Monday night's storm dumped as much as 10 inches overnight.

Courtesy of the Bureau of Indian Affairs

A Lake Superior tribe is assessing damage after a storm this week brought torrential rains and flooded their reservation. The flooding cut off the Bad River Band of Lake Superior Chippewa from regular routes to food, water and medical supplies.

Bad River's flood command spokesman Dylan Jennings said the tribe is doing what it can for members.

"The ones that have lost their houses and whatnot are being put up in either the casino lodge or in some of the other local hotels in the area and taken care of in that way," he said.

The tribe is advising members to drink bottled water or boil their water to avoid contamination from flood waters.

Jennings said historical markers for old burial sites and the tribe’s pow wow grounds are among the areas still under water. Members of Gov. Scott Walker’s cabinet and U.S. Sen. Tammy Baldwin met with tribal officials or visited the reservation to see some of the damage firsthand. Jennings said one thing the tribe is concerned about is the state of "manoomin," or wild rice.

"To date, we haven’t had anybody be able to get out (to the Kakagon Sloughs) and assess what the damage to our wild rice is yet," Jennings added. "But, as Anishinaabe people, we are really resilient and we will figure out a way to deal with whatever hand we’ve been dealt."

Transportation officials had hoped to open east to west access on U.S. Highway 2 on Friday. But, Jennings said engineers are working on repairs by the Kakagon bridge.

"It’ll take a little bit of an extended time to fix that, and hopefully it’ll be done by Monday," he said.

Jennings urged drivers in the area that may be taking part in Ashland’s Bay Days event to avoid travel near the reservation if at all possible.

Wisconsin Emergency Management spokeswoman Lori Getter said U.S. Highway 63 in Hayward may also be reopened by the end of the day on Friday or Saturday.

"They are expecting some thunderstorms tomorrow night, but, if you talk to the National Weather Service, they’re looking at less than a half of an inch of rain," said Getter. "So that should really not cause any impact to the recovery efforts."

Getter is urging people to keep any travel plans up north, but plan ahead for detours.

Meanwhile, some recreational trails on national forest land in northern Wisconsin are closed, according to the U.S. Forest Service. Areas west of U.S. Highway 13, north of U.S. Highway 77 and east of U.S. 63 are among areas closed to the public. Forest roads around the Delta-Drummond area are also closed, as well as several campgrounds in Bayfield County.

"We are working hard to conduct the assessments, make repairs to priority roads that access residents and ensure public safety," said Jim Grant, the agency's incident commander for the storm in a press release. "We have opened several roads within the closure area for local traffic and we anticipate that number to increase."

The damage to roads also has implications for the timber industry in northern Wisconsin. Overweight permits have been suspended for truckers traveling through the region. Trucks can only haul 80,000 pounds.

"We’re not moving wood as fast for one thing. The mills use their supplies up pretty quickly nowadays. They don’t keep a lot of wood on inventory,” he said. “If we’re hauling less, that means it’s going to take a lot more truckloads to generate the same amount of raw product to them."

Schienebeck said whether they’ll be able to keep up with the demand depends on how long it takes to get roads repaired.

Updates on road conditions from the Wisconsin Department of Transportation below: