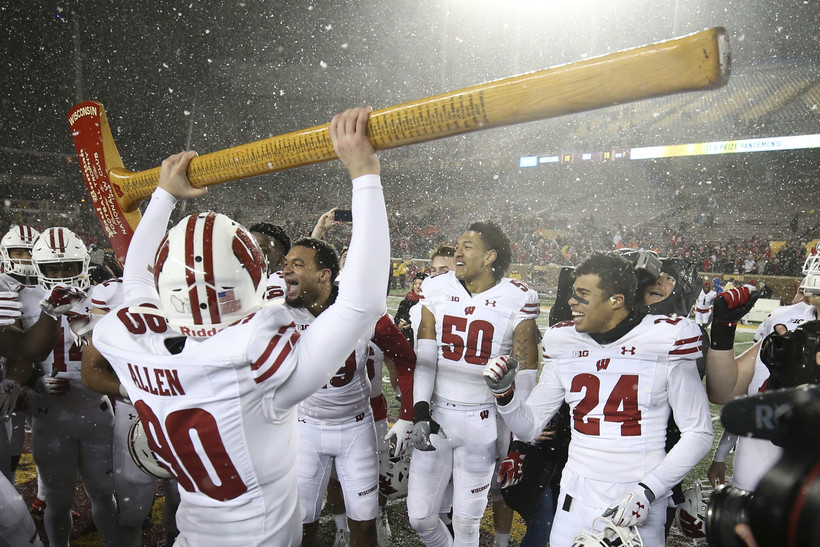 Axe Game will have big implications for Badgers Saturday

Wisconsin will advance to the Big Ten title game with a win over Minnesota
By Megan Hart
Share:

It’s always a big deal when the Wisconsin Badgers take on the Minnesota Golden Gophers for Paul Bunyan’s axe. But the stakes are even higher this year.

Wisconsin started the season with a loss to Penn State. Then things just got worse. The Badgers went on to lose two of their next three games. And in college football — a sport where every loss has major consequences — it looked like this season could be a lost cause.

But the Badgers have won seven straight games to battle back. Now they’re one win away from playing for a conference championship. Head coach Paul Chryst said his staff kept its message consistent throughout the season.

"We’ve got to just keep going. We know what we’ve got to do and trust who we are and trust each other," he said during a news conference this week.

If the Badgers are victorious in Minneapolis on Saturday, they’ll play for the Big Ten title for the fourth time in six years. Even without the extra implications, the Axe Game always means a lot, Chrys said.

"It’s the longest rivalry in college football, and to be a part of that is special," he said. "It’s a challenge, but it’s a great opportunity to play against a good football team."

Wisconsin has a slight statistical advantage in most categories, but the teams are pretty evenly matched — with the Badgers averaging 27 points per game and the Gophers averaging 26. Minnesota has a balanced offense, Chryst said.

"We’ve played against the quarterback a number of times, and he’s a really good football player. They do a good job. They’ve got good players. They’re physical. They play hard, and they’ve got guys who can make plays," he said.

"I think their linebackers are better than they’ve ever been," he said. "Their secondary is very intelligent, very smart. They keep everything in front of them. Maybe one of the best defenses we’ve played in our time here, of any opponent."

The Badgers could also reach the championship game if they lose to the Gophers. That scenario would require Iowa and Purdue to lose this weekend. Minnesota could advance to the title game with a win over Wisconsin and losses by Indiana and Iowa.

Whoever advances will face a tough test. The Big Ten adopted its current format in 2014, and the West — Wisconsin’s division — has never won a title game. There’s still plenty of competition in its ranks, Chryst said.

"Every week, it seems like it’s challenging," he said.

Wisconsin is No. 14 in the College Football Playoff rankings. The Big Ten championship game will take place Dec. 4 in Indianapolis. Ohio State is favored to win.