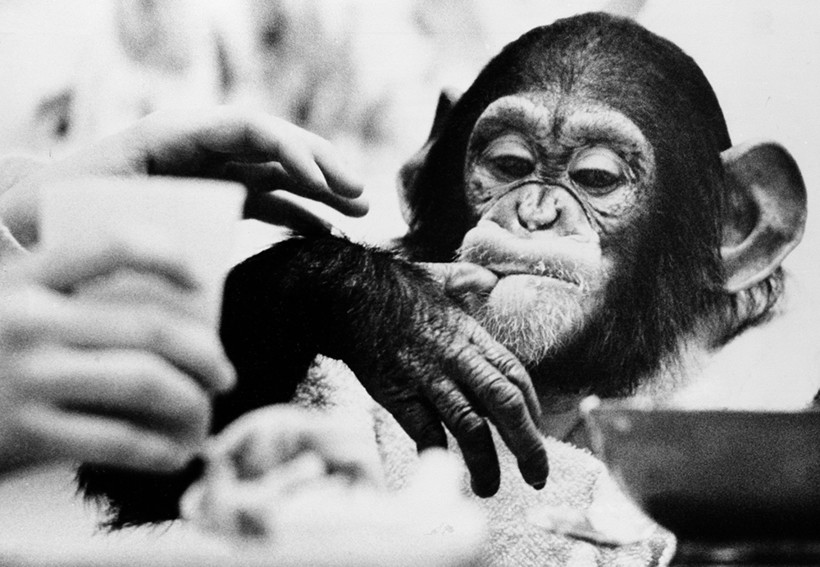 Nim Chimpsky, with his thumb tucked into his lower lip, signals that he wants a drink during lunch in his Columbia University classroom, March 27, 1975, New York. Nim eats a combination of baby food and fruit from a student volunteer. Jerry Mosey/AP Photo

Author T.C. Boyle lets the chimps speak their evil in 'Talk to Me'

In his 29th book, the 'Outside Looking In' author explores the depths of animal consciousness
By Adam Friedrich
Share:

"I was living with a woman who suddenly began to stink."

That is the opening line to prolific author T.C. Boyle's 1977 short story, "Descent of Man." It's an absurdist tale about a chimp named Konrad who is at the center of a love triangle between his handler and her professor boyfriend. Boyle was inspired by the experiments of the era to try and teach chimpanzees sign language to communicate.

The story was picked up and published in The Paris Review. For a young Boyle, this was a huge moment in his budding career. Now, nearly 50 years and 30 books later, Boyle has revisited the subject with his novel, "Talk to Me."

He tells WPR's "BETA" that while the subject matter (and the love triangle) may remain the same, the approach isn't anchored in absurdity.

"There is certainly humor in my portrayal of Sam the chimp at the center of ('Talk to Me'). But also, there's a great deal of tragedy, too, in the book," Boyle said. "And it is not absurdist. It is sticking to what actually happened in some of these experiments."

Basing "Talk to Me" on the actual experiments of the '70s and '80s and using texts like Elizabeth Hess' "Nim Chimpsky" and Robert Fouts' "Next of Kin" that documented them, Boyle is primed to move past the surface level conceit of a love triangle and explore deeper philosophical questions about interspecies communication and consciousness.

"I think the hope was not necessarily a Doctor Dolittle kind of thing, but the hope was if the chimp could learn our language in the way that a three and a half year old child does, and this is the intelligence level of a chimp, that perhaps it could communicate something to us about the mystery of this life on this planet and who we are and why we are and what it means to be alive," says Boyle.

Boyle's approach to this is to actually give Sam the chimp point of view chapters. It's a compelling structure to the novel and allows Boyle to play with language to achieve his themes.

"The job of the writer is to inhabit anybody, anytime, anywhere and make it credible," he said. "That's the beauty of fiction, to create different points of view so that everyone can experience something outside of him or herself."

Boyle employs a device in these chapters by only capitalizing the words Sam the chimp is aware of and understands.

"The words that I emphasized, that are capitalized in the text, these are the words that he knows very well. And this is how he is trying to adjust to this world, but meanwhile the narrator stands back and says, 'Well, this is a term he didn't know, but he wanted to know it,'" Boyle said. "We get his emotions, and we also get his perspective. It was a challenge, and it was a delight for me to write these chapters."

Throughout "Talk to Me," Boyle is raising larger questions though about animal consciousness. Do they have a soul? Do they worship a god? He's picking at the concept of self-awareness in other species and wondering whether that would bring out the human elements in them and perhaps allow us to better recognize our animal instincts.

"We try to deny it. But I think it is true," he continued. "So much of what we are is controlled hormonally and also, we are built to reproduce the species. That's what life is. The only purpose of life is to make more life and we can rationalize it all we want. But a large part of what we are seems to be rather mechanistic, too."

When posed with a hypothetical scenario where he could indeed ask another species anything, Boyle states he would focus on the how do they do what they do, arguing we will likely never get to the why. He says that generations of humans haven't sorted that yet.

"We all assume that we've progressed beyond the other apes to this is brilliant status and so on, and this is positive. But in fact, maybe all we needed was to survive in tribes and have enough brain power to bring down our prey and feed ourselves beyond that," Boyle said. "Look what we have wrought. What we have wrought is complete destruction on all the other species and soon a suicidal destruction of ourselves. Maybe our brains are an evolutionary backwater. The chimps left alone in the jungle would be far better off than we are in our towers."