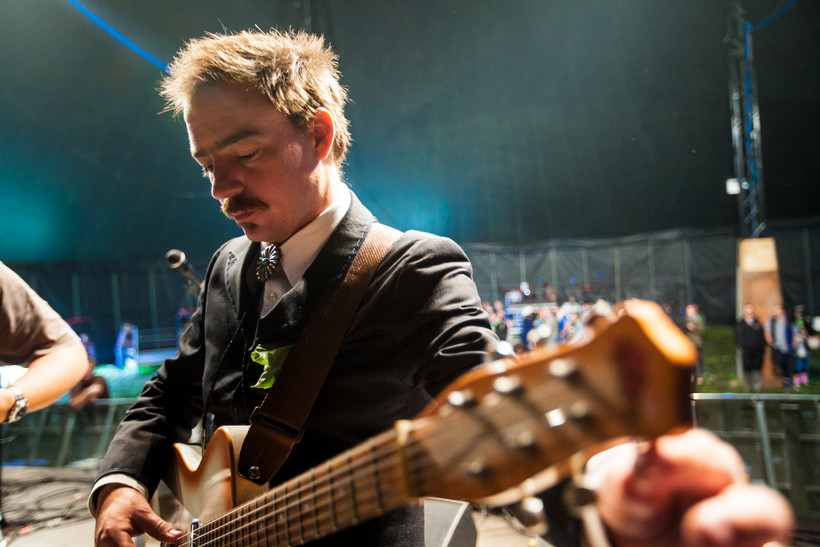 Osmon Ranks Molina Up There with Van Zandt, Young And Dylan
By Doug Gordon
Share:

Singer/songwriter Jason Molina was born in the Rust Belt in 1973. He was a visionary and prolific artist who built a faithful and solid indie following as the frontman for Songs: Ohia and Magnolia Electric Co. With shades of Neil Young in his voice and a poet's ear for lyrics, Molina's minimalist style made fans out of his contemporaries, including Ireland's Glen Hansard. Molina died in March 2013 of organ failure related to alcohol abuse. He was only 39.

Erin Osmon is the author of the definitive biography about his life and music, "Jason Molina: Riding with the Ghost." WPR "BETA’s" Steve Gotcher spoke with Osmon over Zoom to learn more about the story of Molina's life and music and how the song "Cabwaylingo," off his debut album, struck a chord with her.

"One of Jason's songs sort of filtered down to Evansville (Indiana) through a cassette tape trading network that we had," Osmon said. "It's from 'The Black Album,' which is the first Songs: Ohia record. And it really struck a chord in me because it embodied a lot of the punk qualities that I loved. It was a low-fidelity recording. And it had kind of an underground spirit. It was an acoustic guitar-based song. It was really plaintive and poetic and sort of sounded like Neil Young."

Osmon says she thinks Molina is "a really important figure to the fabric of the arts in the Midwest."

"He grew up in a trailer park essentially," Osmon said. "But it's not what you might typically think. It was really kind of a pastoral and beautiful landscape."

Molina lived with his brother and sister; they grew up fishing, exploring the woods and doing a lot of reading.

"All of his ideas were born of this imagination that was fostered in this remote area where he grew up," Osmon explained. "And I really relate to that, having grown up in southern Indiana two hours away from any major city. I didn't have a lot of access to record stores. I couldn't just walk in and buy any CD that I wanted."

Osmon said she thinks this is a story shared by many children who grew up in the Midwest away from major cities and from the coasts. As a result, you have to create your own ideas and build your own scene.

"It's a really DIY (Do-It-Yourself) pursuit. And I think Jason is really just a paragon of that. He's a pinnacle of what happens when a Midwestern kid who's keenly intelligent and curious about the world and exploratory — what could happen when all these things kind of come together and are given a shot."

In her book Osmon writes that Molina found his footing in the progressive campus of Oberlin College.

"Jason's time at Oberlin was really transformative," Osmon said. "Before Oberlin, Jason was playing in kind of a wild punk slash alternative band with some guys from high school. But when he went to Oberlin, he transformed into this guy with a guitar and became more of a folk singer. And he met like-minded people both on and off campus who were supportive of his new idea about who he was as an artist."

A few of Molina's friends gave one of his demo tapes to singer/songwriter Will Oldham (also known as Bonnie "Prince" Billy) at a Cleveland show. Oldham was impressed and issued Molina's first single through Drag City, the iconic indie record label in Chicago. Molina went on to sign with the homegrown indie record label, Secretly Canadian, based in Bloomington, Indiana. He became the label's flagship artist. In 1997, Secretly Canadian released Molina's "Songs: Ohia" album (also known as "The Black Album").

Two years later, Molina received a fan letter from the Irish singer/songwriter Glen Hansard. As Osmon writes in her book, Hansard said that "The Black Album had become a sort of religious refuge for him, something he enjoyed musically but also craved emotionally, much in the vein of Joni Mitchell's 'Blue' or Nick Drake's 'Five Leaves Left.'"

"(The Black Album) has this really timeless quality because the fidelity of the recording is pretty low," Osmon said. "It was recorded in the house in Oberlin. And oftentimes, Jason was singing in a bathroom with his guitar. So it has a lot of Jason's oblique poetry sung over acoustic guitar. And that's it. There's minimal instrumentation by some of his friends at Oberlin. It's just one of those records that came out at the right place and time. I think it affected deeply the people that were able to find it. The cover was really beautiful and mysterious. It's just black and it has a screen print image of a hair on the front. And I think, you know, Glen had the same experience that many of us did when we heard this record. It was really unique. It was really touching."

In 2000, Molina released the album, "The Lioness." The first song is a really haunting lament called "The Black Crow."

"That song really socked me in the gut the first time I heard it," Osmon said. "And 'The Lioness' is a lot of fans' favorite record for good reason, but it is a darker, moodier record. Jason started playing with electronic or synthesized elements a little bit on this record. It was recorded in Scotland with members of (Scottish indie rock band) Arab Strap and also (Scottish folk musician) Alasdair Roberts, who's a Drag City recording artist and a great friend of Jason's. It's also a love record, but it's more mature and it's more, I would say, holistic in terms of the work that goes into relationships and kind of the heartache that you can feel."

Molina's struggle with alcoholism ultimately led to his death. On March 16, 2013, he was found dead in his Indianapolis apartment.

But his legacy lives on, Osmon says.