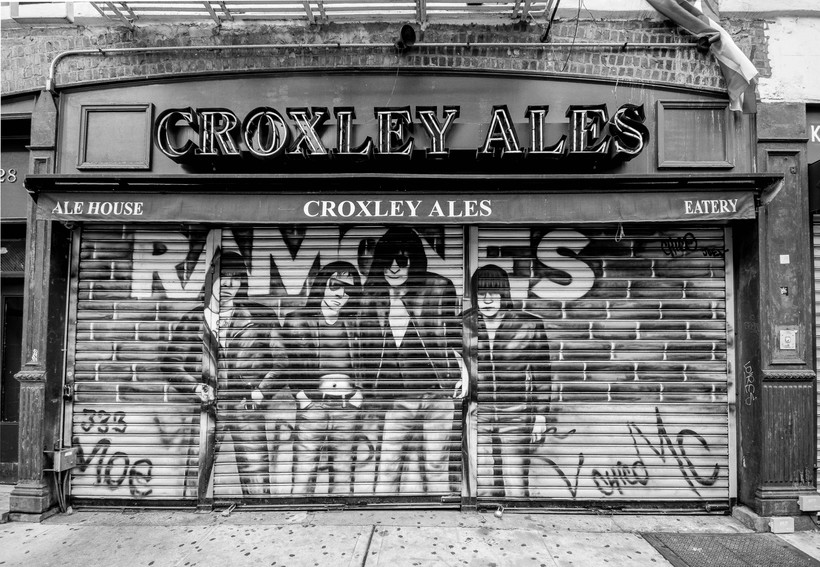 Gaines Says The Band Created A Community for Misfits and Outsiders
By Doug Gordon
Share:

The Ramones are considered by many to be the first true punk rock group. The band formed in the Forest Hill Queens neighborhood in New York City.

Donna Gaines is a big Ramones fan. She’s also a sociologist, journalist and social worker, as well as the author of "Why The Ramones Matter."

"Part of what interested me about writing a book about a very well-known band was that they were a window to what it felt like to come of age in the 70s when music was so corporatized, when the American dream was slipping far out of reach for a lot of people, people coming of age and just feeling so alienated, and particularly the kids who were like the Ramones and some of the fans," Gaines said.

Gaines said that she believes The Ramones invented the genre of punk rock.

"Well, let me just back up from a musicology point of view and say that there were garage bands early on and strains of punk in Iggy Pop's music," Gaines said. "Iggy and the Stooges, Wayne Kramer and The MC5. That all could be considered punk. But the Ramones really sealed it in blood with this first album -- demoting the role of guitar solos, advancing the idea that it was democratically available to any person to create their own music and to have a band. There were just a lot of things that they brought to the table -- the three-minute songs, and then the way they distilled their message. And then add to the above all things like you didn't have to be beautiful, rich, be a maestro guitarist, have tons of corporate backing -- the idea that it really belongs to the kids."

One could argue that lead singer Joey Ramone's voice might have been the band's secret weapon, its USP (Unique Selling Proposition). He was actually singing, unlike the vocalists of a lot of other punk rock bands who were shouting and yelling to express their anger.

Does Gaines agree that Joey's voice was part of what made the Ramones stand out?

"Oh, absolutely," she replied. "He was no screamer. He wasn't a screecher. He used his voice as what it is, which is a musical instrument. And he worked at it. He took voice lessons. It was different. It was very different than, say, a screaming Sex Pistols. And of course, we loved them, too."

Joey and bassist Dee Dee Ramone wrote most of the songs for the band. "Dee Dee to me was speed pop," Gaines said. "He was bizarro; he was a genius. He was absolutely original. And the songs were funny. They were critical. They were very radical. Joey's songs had more of a romantic edge to them. Joey was more open musically than most people would even know. And so Joey had added a little romance to it. The combination of the two gave you a lot of variety and it included a lot of people -- angry people and lonely people."

A couple of years after the Ramones retired and a long time after Dee Dee quit the band, Gaines ran into him on the Lower East Side. He told her that he didn't feel like he fit in anywhere.

"On the one hand, it was heartbreaking," Gaines said. "On the other hand, it was the most validating thing he could have ever said. And I remember we were standing in a club where he was a king bee, and he was with his beautiful wife, Barbara Zampini, who was herself a musician. Anybody that would have walked by would have just been, 'Wow, that's Dee Dee.' And he's standing there in the city that he built -- basically downtown punk New York. And he's saying, look, I just don't fit in anywhere. And I looked at him and I said, 'Dee Dee, you don't have to. We fit in with you.'"

"When you look at what the Ramones were all about, their ministry being to draw the outcast in from the margins," Gaines said. "And this is something that comes up in every one of their stories -- that they were outcasts, they were deviant kids, and they were people who felt they didn't belong and they weren't wanted. And they created this safe space for people who felt the same way and still do. I think one of my favorite songs is 'Outsider,' which I think I play it every day. Just makes me really feel like, wow, if I am, then I'm not alone."

So why does Donna Gaines think the Ramones matter?

"They matter politically because they gave people the ability to critique the mainstream without having to go through college, which many people may not have been doing to learn critical thinking and critical theory. They gave people this alternative economic base in DIY (Do It Yourself), which allowed them to create their own music. They told the outcasts and the outsiders, 'Hey, you matter. You're welcome. Gabba Gabba. We accept you. We accept you, one of us.' Now, what more does anyone want? Out of religion, out of family, out of community. And they gave that to people in music, you know, a brilliant music."